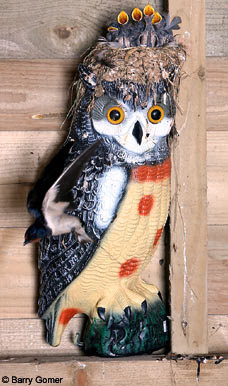 Oh, dear. I knew birds weren't fooled for long by those cheesy plastic fake owls people set out, but this is ridiculous! Check out this story from the Daily Mail: "Fake 'bird-scaring' owl becomes home for family of swallows."
Laura Erickson at 3:09 PM 2 comments:
Share

Since June, I've been trying an experiment, allowing Google ads to display on the blog. In over a month, I've earned a total of 71 cents. Meanwhile, the ads that have appeared here have included ones for products and services I don't endorse. Today was the last straw--there was an ad for a company promising to get rid of swallow nests. So I've dropped the project.

Being unemployed sucks. But I can live without that 71 cents.
Laura Erickson at 11:15 AM 2 comments:
Share

This morning my daughter Katie kept me company on a nice, long walk in Port Wing, Wisconsin. We heard a lot more birds than we saw, and most birds weren't singing at all--even at 5:45 am the temperature was in the 70s and most birds are beyond the singing season now. The only good photo-op I had was with a bunch of Cliff Swallows by the Port Wing Marina. They were pretty cooperative for digiscoping. 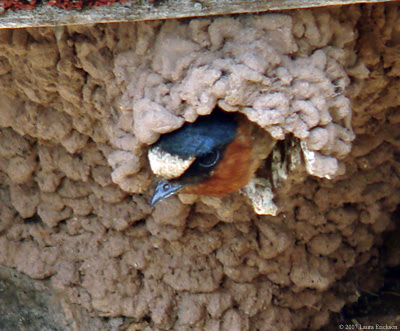 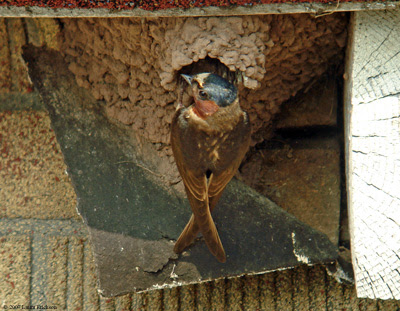 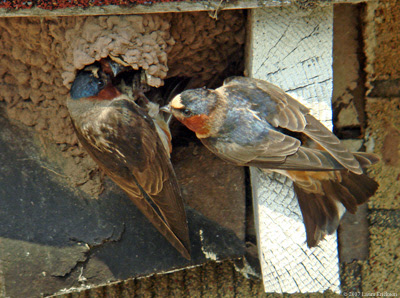 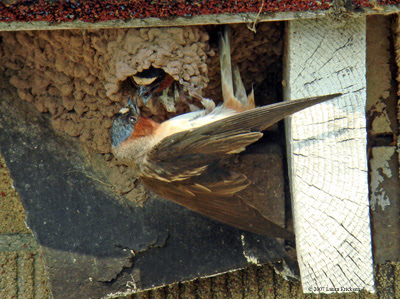 I posted a bunch more photos of them on my Cliff Swallow photo gallery.
Laura Erickson at 10:58 PM 1 comment:
Share

I've been invited to be a speaker, possibly, at a birding conference in the Southwest. But no one on the board who will be making the final decision has ever heard of me, so they need references from people who have heard me speak. Anyone who's heard me want to help? Email me.

THANKS SO MUCH TO EVERYONE WHO HELPED! THEY HAVE ENOUGH NOW. I REALLY APPRECIATE ALL THE HELP!
Laura Erickson at 4:34 PM 1 comment:
Share 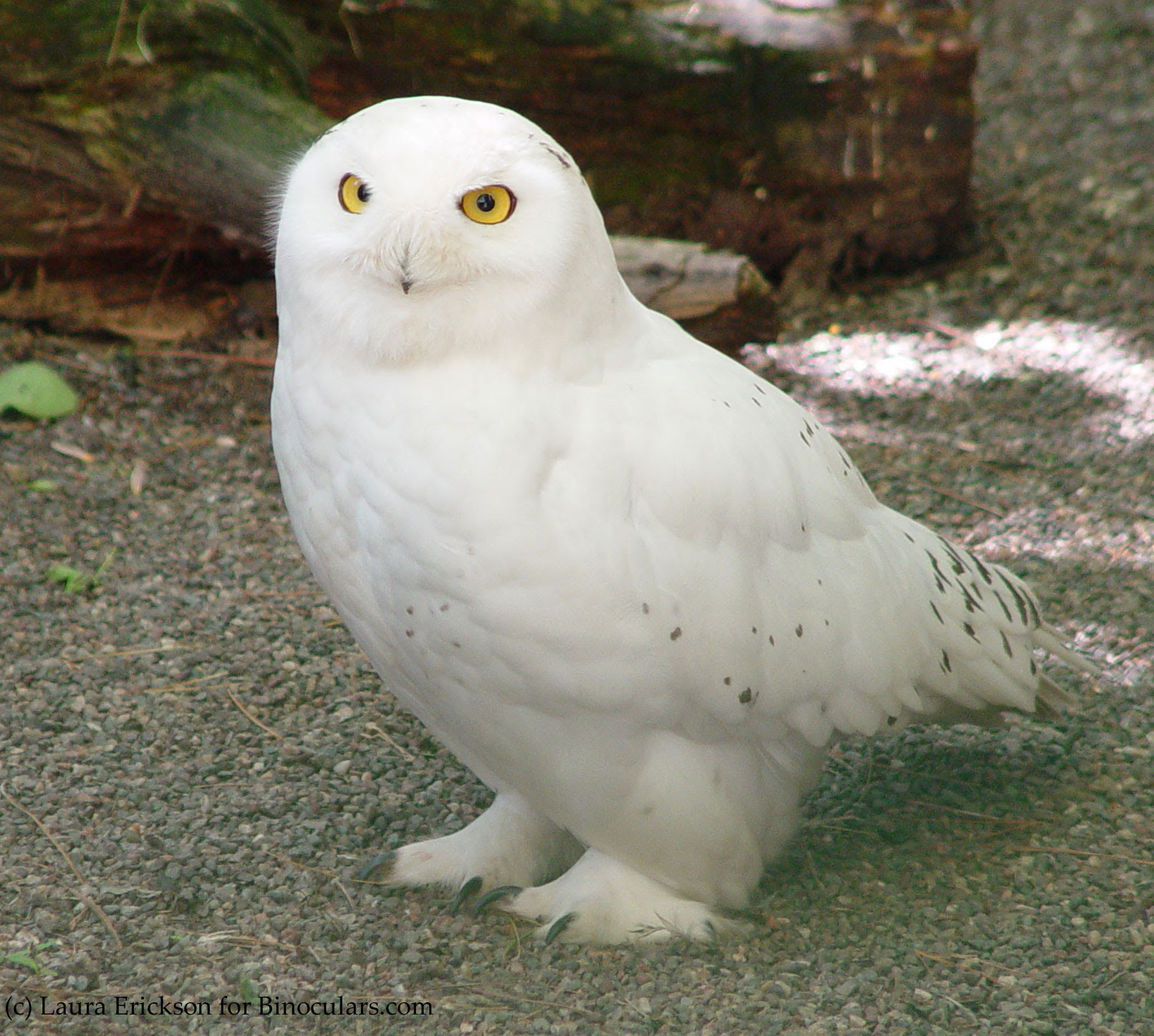 Comments WILL be allowed to discuss this, so please don't read any comments associated with this post if you don't want to know about the spoiler.
Laura Erickson at 11:53 AM 48 comments:
Share 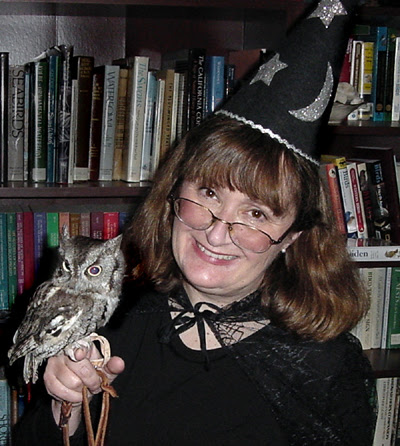 Tonight is Archimedes and my last gig as Professor McGonagowl and my trusty "Scops Owl" Pigwidgeon. Archimedes doesn't particularly like this kind of cross-species acting job, but there was no way he'd pretend to be Percy's screech owl, so we had no choice. We'll be at Duluth's Depot for the Northern Lights Books Harry Potter Party till midnight. After that, don't expect to hear from me again till I've finished The Deathly Hallows. If you'd like to keep track of the owls as you read the books, check out my Owls of Harry Potter page!

Last week after our big windstorm in Duluth, the ever wonderful Debbie Waters got a call about a couple of downed baby Merlins in my neighborhood, and since she was out of town, she called me and asked me to pick up the babies and bring them to a woodlot just across the street from the nest tree. I'd already picked up one baby the previous weekend--at that point I put it back on a low branch in the nest tree, but apparently it wasn't quite ready to grasp branches well, so Debbie had already come in and re-rescued that one.

When I got there on the 12th, one baby was still on the ground, so I picked it up and carried it across the street and found a branch it could hang onto pretty well. The mother squawked and circled over me the entire way, so she knew exactly where the baby was. Then I headed back to find the second one. I couldn't find it anywhere, though I searched the ground and in the low branches of shrubs in all the adjacent yards, too. But then I looked up and voila! That baby was probably still a bit clumsy, but it had apparently crossed over to the fledgling stage, and was now perched in the pine tree.

I added a bunch of photos of the little family to my Merlin Photo Gallery. My favorites: 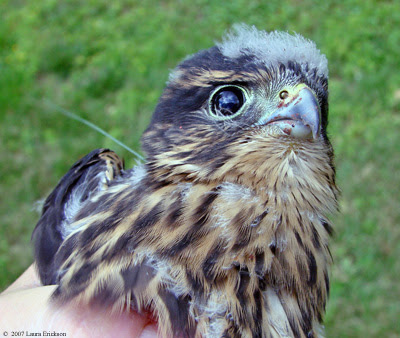 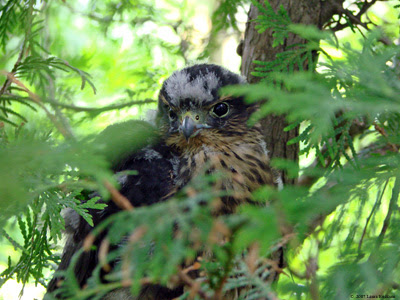 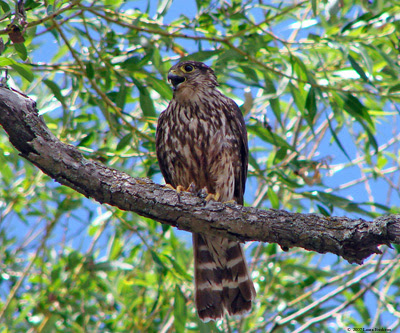 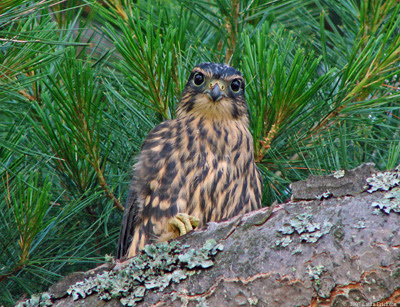 Here is a lovely tribute to a great woman, based on the respect Lady Bird Johnson earned from her Secret Service agents. I was particularly touched by this comment by Jim Hardin, who was assigned to her for 22 years:

As Johnson and her agents traveled the globe, she always visited museums, always chatted with strangers and always asked questions.

Johnson understood and appreciated that the agents shared her interest.

"We'd be in a museum, and when she was ready to leave she would turn to us and ask if we were ready or if we wanted to look a little longer," Hardin said.

Oh, my gosh! Stephen Colbert as a religious figure

Check THIS out!!! I only wish in the photo above they'd shown a bear in the background and a baby eagle on his hand.
Laura Erickson at 12:37 PM 1 comment:
Share 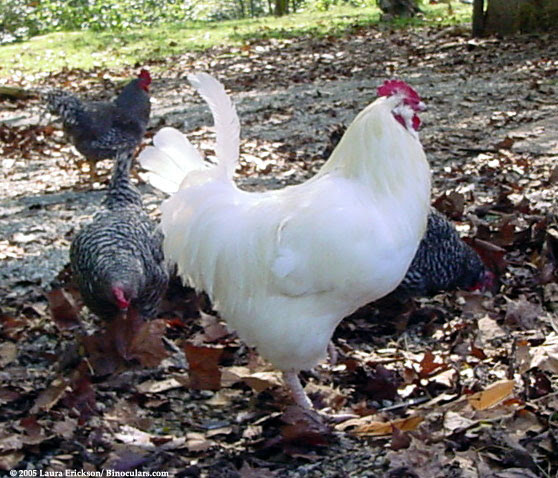 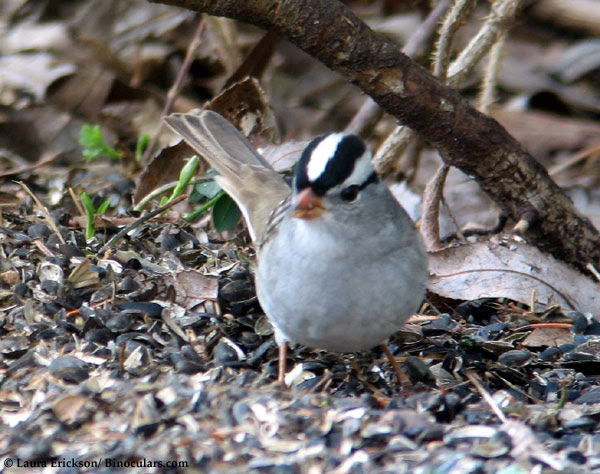 For male sparrows looking for a mate or trying to defend their turf, it pays to keep up with the times and latest musical hits.

A new study finds that female white-crowned sparrows pay more attention to new bird songs than vintage tunes, and that other males find the oldies much less threatening.

Here's a cool story about a policeman in Palo Alto and some wildlife rescues he's made.
Laura Erickson at 11:03 AM No comments:
Share

What to do about deer? 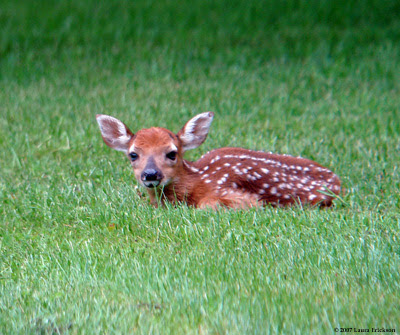 I love deer. They're beautiful animals, and when I see a fawn I can feel my pupils dilate. I would feel brokenhearted if I hit a deer with my car, and am bummed out for the day and never seem to forget the sight when I drive past a dead fawn. But that isn't to say that there aren't too many deer. It's just to say that I don't know what to do about it.

I'm not a hunter. When I was a little girl, I consistently scored better than my older brother when we'd shoot his BB gun at targets and tin cans, but he'd always win our tournaments because I refused to even aim at any target shaped like a person or animal, much less shoot at living birds or frogs or turtles. I do not disapprove of sport hunting (as opposed to taking down 70 or 80 pheasants and an undisclosed number of Mallards on a game farm, which I consider an unsporting massacre). I wrote my essay, "About Hunting," about my own struggles to reconcile my personal revulsion toward blood sports with my admiration for Peregrine Falcons and other hunting animals and my respect for many hunters.

No matter what our feelings about hunting, the reality is that there are way too many deer, leading to habitat degradations that are most certainly exacerbating population declines in many species. My guess is that deer play a role in the declines of American Woodcock and Ruffed Grouse both by damaging ground vegetation and by eating eggs and chicks. An essay by Patrick Durkin in the Green Bay Press-Gazette discusses careful research done in Wisconsin 50-60 years ago by John T. Curtis, a University of Wisconsin botanist, who documented the plant communities in 1,400 habitat sites across Wisconsin between 1947 and 1960. Researchers recently revisited 62 of those sites and followed Curtis's methodology, documenting a nearly 20 percent loss of native plants, a slow rise in non-native plants, and less overall variety in plant species. Durkin notes in the Green Bay Press-Gazette article,

Not surprisingly, the biggest impacts were caused by white-tailed deer. Whitetails aren't known to run about the forest, shovels in hoof, replacing native plants with exotics, but their diet preferences determine which plants thrive or suffer.

As deer eat away vegetation that pleases their palate, the plants that take over are typically "generalists" such as native ferns, sedges and grasses. Deer turn up their noses at those plants. In addition, invasive plants like hemp nettle, orange hawkweed and Kentucky bluegrass also take hold.

The most intact, diverse plant communities remaining from Curtis' era grow where white-tailed deer are kept in check. The best examples are on Chippewa and Menominee Indian reservations, where deer numbers are usually half of what roams surrounding lands.

The most ironic finding was that two of the three study sites suffering the largest hits to plant communities were inside state parks, where no deer hunting was allowed. Imagine that. We set aside large areas to reduce human disturbance, but allow almost all recreation except hunting, and let plant communities take a pounding by hungry deer.

Those who protest every time the DNR opens a state park to limited deer hunting should keep that in mind.

But before anyone talks too smugly, they should realize few — if any — people would have noticed those shifts in the forest's plant communities if Curtis and his colleagues hadn't documented what they found 50 to 60 years ago.

Why DO we speed?

I was just taking a look at the quietnorth blog which has an entry to a Talk of the Nation program about "Psychology Behind the Wheel: Why do we speed?" That's a topic near and dear to my heart since one of my 101 Ways to Help Birds is to "Drive at the slowest speed that is safe, courteous, and convenient." This week on Birdchat people have been discussing the disappearance of Common Nighthawks--there are many contributing factors, one of which is that the species is vulnerable to colliding with cars, both when roosting on gravel roads and when attracted to insects in headlight beams. Cars also kill a disproportionate number of owls, especially Short-eared and Barn, and Red-headed Woodpeckers. A constant new supply of roadkill is subsidizing a crow population that is already higher than natural. And driving fast squanders energy and contributes to pollution, including CO2 emissions that exacerbate climate change. I wish most cars showed at every step of the way gas mileage the way my Prius does--that screen serves as a constant reminder that our driving habits directly affect fuel consumption. The US EPA has a webpage about driving habits and fuel economy. It states,

While each vehicle reaches its optimal fuel economy at a different speed (or range of speeds), gas mileage usually decreases rapidly at speeds above 60 mph.

Slowing down saves energy, saves wildlife, and saves lives.
Laura Erickson at 3:29 AM No comments:
Share

The festival is always the 2nd Saturday in October, the first band starts around 11:00am. and the last band plays until 11:00pm.

The deep fried delights start being served around noon.

Sorry, No one under 21 will be admitted to the Festival.

Anyone know what this Oklahoma flower is? 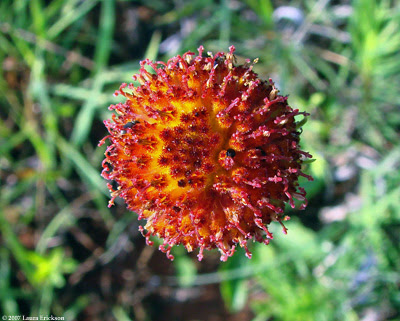