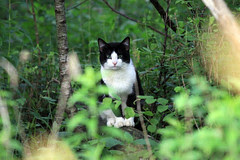 Cat
Originally uploaded by Laura Erickson
This beautiful cat is a natural born killer, but as a domesticated animal it is decidedly NOT a natural predator. What natural predator would kill two shrews just for fun, leaving the carcasses when the tiny mammals stopped "playing" along?

This morning when I was walking Photon we came upon the first dead shrew and I wondered what had killed it. Shrews apparently taste horrible, and normal predators, after tasting one, stop wasting time with them. The question was answered when we came upon this cat with the second shrew in its mouth. When it saw Photon, it dropped the shrew and skulked into the woods, too late for the little mammal. I could tell exactly where the cat was in the understory by following the sounds of the many anxious parent birds giving alarm calls. 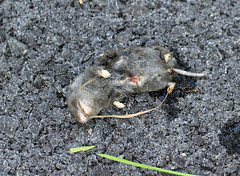 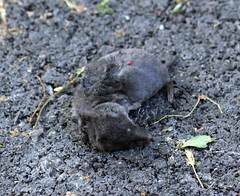 There are so many nestlings and flightless fledglings right now--I get a stomachache every time I see a cat slinking about outdoors. Someone recently asked me whether their cat was in danger from Barn Owls that were calling and seeming to "scold" the cat every night. I feel so angry when people pretend their cat is a natural predator but don't want to subject it to the same harsh realities that genuinely natural predators face. And in the case of the Barn Owls--they're hardly big enough to mess with most cats. That group was clearly a family with probably more than one owlet. Their chicks were far more at danger from the cat than the cat was from the owls.

I love cats. But they belong indoors. Period.
Laura Erickson at 9:17 AM 9 comments:
Share 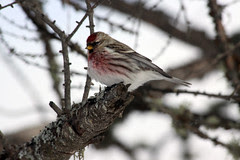 Common Redpoll
Originally uploaded by Laura Erickson
My grandpa died 39 years ago, on Father's Day, 1970. He was one of the formative people in my life who get credit for whatever good I may do, and there are still times when I ache with longing for him. This is hardly the first time I've linked to this story, but since it's Father's Day, I'm reposting it, the one tribute I've written about him, "Grandpa's Canaries."
Laura Erickson at 12:09 PM No comments:
Share 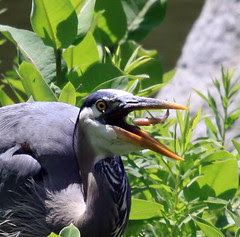 Great Blue Heron and fish
Originally uploaded by Laura Erickson
I have been having a LOT of fun with Annie, my new camera. We took this photo at lunch yesterday at the lab. Amazing to realize that this poor little fish is right now nourishing not just one heron but three or four others. That's how many babies are in the nest. Three for sure, and maybe four! I'll be trying to get more photos from the nest tomorrow.
Laura Erickson at 5:01 AM 5 comments:
Share 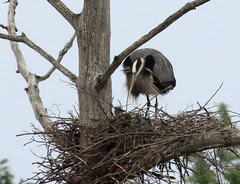 Great Blue Heron and chick
Originally uploaded by Laura Erickson
The Great Blue Herons nesting in Sapsucker Woods this year have been so wonderful to watch that the window in the staff lounge has become something of a Laura magnet. We could tell that at least one egg hatched Friday or over the weekend, because we could watch the adult regurgitating food, and today I finally got a glimpse of a chick!
Laura Erickson at 7:48 AM 2 comments:
Share 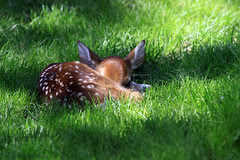 Fawn
I was home in Duluth for a few days last month, on either end of spending a week in Eagle River, Wisconsin. It coincided with the time of year when fawns are born, and as we were packing my stuff, I told Russ that more than any other thing, I was hoping to get a chance to see and photograph a newborn fawn that week. Minutes later while we loaded the car, my neighbor walked by and said there was a fawn in her backyard. We zipped over there and voila! I’ve posted a few photos of it on my flickr page, and one is up on my Twin Beaks blog.

There is something exquisitely innocent and sweet about a tiny fawn. If I hadn’t needed to get on the road, I’d have spent hours there, mesmerized by the tiny thing curled up in the lawn. As long as you keep a respectful distance, fawns are fearless. Their mother told them to stay put, so they do, trusting in cryptic coloration and a benevolent universe. And at this point, the universe is indeed benevolent for them. A great many are killed every year during hunting season, and too many are killed on highways, but the fact that their numbers remain so very high is testament to how easy their lives actually are right now. Two and a half decades ago I found my own babies even more mesmerizing than this fawn. I stared at them for hours, days, weeks, months, taking endless photos and marveling that such innocence and sweetness could exist on this planet.

Babies and fawns are alike in the way that the sight of them elicits a surge of protectiveness in most of us. We nurture both till they’re on their own, and then we complain, with as much justification as we had when we were nurturing them, that there are too many of their kind on the planet. That fawn is fed on milk that was formed within the doe’s body, fueled by native plants that become increasingly scarce as the invasive exotic weeds that deer shun grow ever more pervasive. My babies were fed on milk produced from the food I ate—vegetables grown on endless acres of farm fields that choked habitat and oozed with pesticides and fertilizers that worked their way into water supplies and up the food chain to contaminate food supplies. At the time the conservative Nixon administration banned DDT in the United States, the pesticide was not just wiping out Bald Eagles and Peregrine Falcons—it was contaminating mother’s milk.

Looking at the tiny fawn curled up on the lawn, waiting patiently for its mother’s warmth and nourishment, trusting implicitly in this benevolent universe, I realized that too much of a good thing is still a good thing. But it isn’t enough to feel protectiveness and warmth toward a fawn or baby—we must act on it. These helpless beings trust in adults to keep the universe benevolent—overflowing with biodiversity, clean water and air, birdsong, peaceful relationships with our neighbors, to sustain them throughout that life so filled with promise. We can’t think this through as if we ourselves were still children—we must remember the harsh realities of predation, disease, and death. Love without commitment isn’t mature love, and those of us moved to protect babies of all kinds must be mature and thoughtful—to learn what exactly are the problems these tiny beings will face, and to use our minds and hearts and labor to solve them in as humane and gentle but committed a way as is humanly possible, to make this world we share truly sustainable for all the babies among us, and for their children and their children’s children. We’re not all of us rocket scientists. But we are supposed to be the smartest species on the planet—it’s up to us to justify that trust we see in the eyes of babies and fawns.
Laura Erickson at 7:50 AM 4 comments:
Share

Last week I promised my Elderhostel class I'd put together a list of links for good websites. Here they are!

*Troy's Elderhostel photos from this year.

*The Cornell Lab of Ornithology's All About Birds website. Type in just about any North American bird in the search box and you'll find a lot--sounds and photos both!


I can't remember what other links I promised. If you think of anything else I should have here, add a comment or email me and I'll edit this post to add it.
Laura Erickson at 8:29 PM 1 comment:
Share
‹
›
Home
View web version