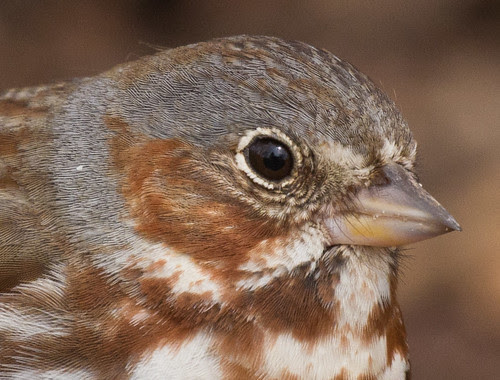 (Today's radio program: listen here.)
Every day for about a week, I’ve been getting emails from people asking me to identify an unfamiliar bird that looks like a huge sparrow but doesn’t seem to be a Red-winged Blackbird. Nowadays, most of these requests don’t end with a description—they actually contain a digital photograph, making my job much easier, and this time everyone supplied photos. And in every case, the bird they were asking about was a Fox Sparrow.

I get dozens to hundreds of Fox Sparrows in my backyard every April. Some of my most vivid memories of April blizzards are of the Fox Sparrows filling my yard with song after the wind dies down. Fox Sparrows are shy birds, staying in or close to thick ground cover, and are usually among the first birds to fly away on our approach or if we rustle a curtain while gawking at them out the window. At that point, some are misidentified as Hermit Thrushes because the two species share a very distinctive rusty tail, especially conspicuous as they fly away. But if you have any look at all, you’ll notice the streaked back on the sparrow, different from the soft grayish brown back of the thrush.

There are four distinctive races of Fox Sparrows. The ones we think of as Eastern Fox Sparrows nest in the northern boreal zone up at Hudson Bay and in Labrador all the way across northern Canada into northern Alaska. These are the prettiest, combining rich rusty with soft gray plumage, and a pure white underside heavily streaked with a large central spot. One western race breeds throughout the Pacific coastal region from Alaska down to southern California, another breeds in the Rocky Mountains from Canada into Montana and Idaho, and another mostly in the Sierra Nevadas. They migrate through the Midwest every spring. As I noted, they visit my yard every year, but this year’s weather has brought an exceptional number to even feeding stations that don’t specifically cater to sparrows, so a large number of people are noticing them for the first time.

Fox Sparrows are huge compared to most of their relatives, especially the juncos that arrive at the same time in late March or April. Many sparrows scratch the ground to expose seeds and insects—Fox Sparrows do this with exceptional vigor. They seem sociable on migration, and often we can see four or five within our binoculars at the same time, but they seem to keep their backs to one another as much as possible. When I’ve been watching and observed two who suddenly end up facing each other, they often break into a squabble, with one chasing the other away.

Much as I love watching Fox Sparrows, I even more love hearing them sing. William Brewster felt the way I do. He wrote in 1883, “To my ear the prominent characteristic of its voice is richness. It expresses careless joy and exultant masculine vigor, rather than delicate shades of sentiment, and . . . is such a fervent, sensuous, and withal perfectly rounded carol that it affects the ear much as sweetmeats do the palate, and for the moment renders all other bird music dull and uninteresting by comparison.” It’s not particularly loud and certainly not irritating, but does carry well, even through many closed windows, so when Fox Sparrows are singing, I’m always at least a little aware of their presence. I spent a day in my backyard shooting photos of them from inside a wonderful camouflaged portable blind that my friend Bruce Pomeroy gave me. I have some really nice closeups on my flickr page—just go to http://www.flickr.com/lauraerickson/

I spent a little time recording my Fox Sparrows today. Listen to a couple of them here.
Laura Erickson at 9:34 PM
Share