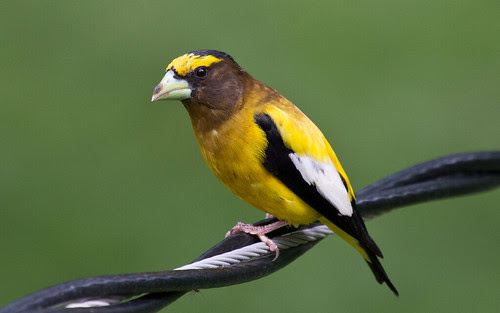 These adult males are still wearing the green beaks that they assume in February or March as they become ready to breed. Every time I've ever seen a male feeding a female during courtship, he's had a green beak. And every time I've seen a juvenile begging from any bird, it's been an adult with a green beak. On the above bird, I'm not sure what the pinkish/brownish area on the beak is, but it's not just discoloration--it was raised, and remained as the bird fed. 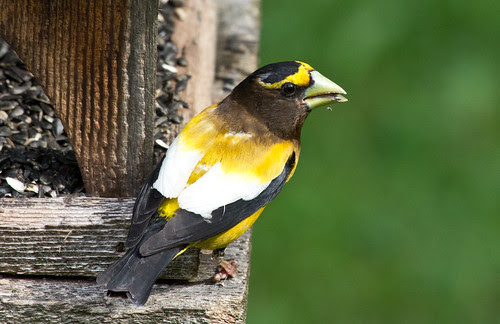 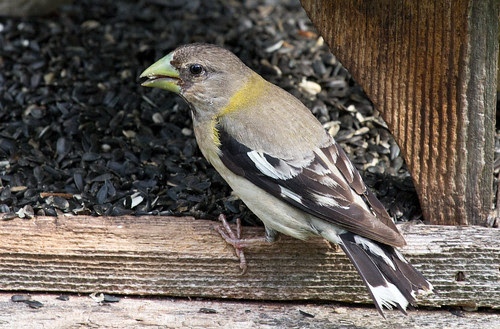 Both these adult females still have their green beaks. The female above shows more wear on her feathers. Juveniles are in fresher plumage. Notice their yellow napes, and that the pale feathers on both birds' wings have faded to white. 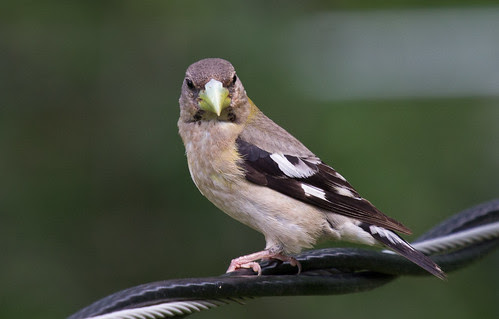 The lower bird is definitely a juvenile female. The above may be an adult, because there is a hint of green at the base of the bill, but she's pretty dark, and may simply be several weeks older than the lower bird--her bill is definitely more developed and her feathers seem fresher. The pale feathers in both birds' wings are still quite yellow--this fades to white over time. Juvenile females faces are primarily gray/brown, with no yellow. 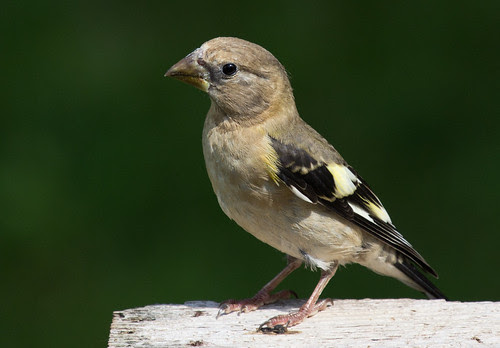 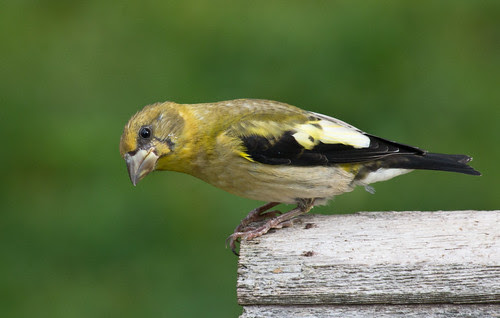 Like adult males, juvenile males lack white in the primaries, and have black tails, though you can often see a bit of white near the tip of the tail on the underside. They have more yellow on their faces. In fresh plumage, there is a lot of yellowish in the light areas of the wings. The above bird is presumably a few weeks older than the lower bird, molting into brighter yellow on his head. 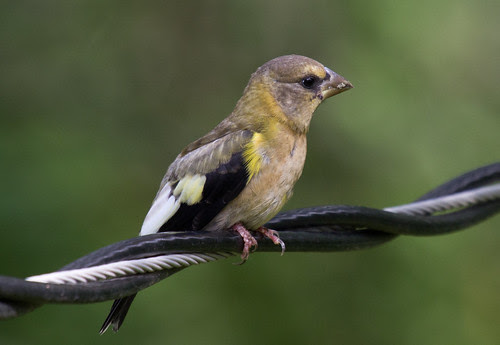 **********
The video below starts with an adult male who is joined by an adult female. She's been molting her body feathers--notice the yellowish feathers on her wings.

The video below starts with two juvenile males closest to the camera, and an adult male still with his green beak. An adult female still with a green beak flies in, and the juvenile to her left instantly begs for food, though she ignores him. She hasn't started molting her wing feathers yet, so the white patches are quite white. Another juvenile male flies in, and one of the first juvenile males is jostled and moves to the inside of the feeder. Notice that when he sees his reflection in the window, he pecks at it once. In the end, a juvenile female flies in along with another juvenile, but we don't see it long enough and it stays behind another bird so from the video we're not sure what it is.