(Transcript of today's For the Birds. In the recording, you'll hear Lang Elliott's recording of an Eastern Screech-Owl trill at the start and finish. The owl calling in the background throughout the program is Archimedes.) 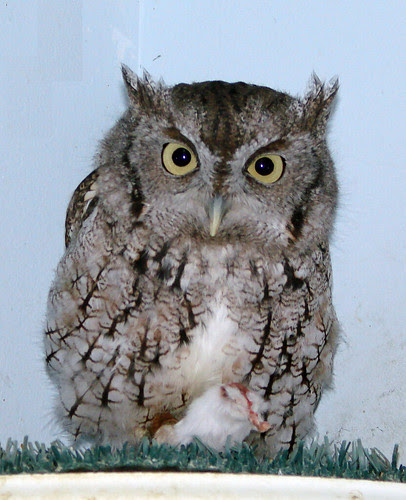 For the past 11-½ years, I’ve lived with an Eastern Screech-Owl named Archimedes. When he was a tiny chick, some children found him in an Ohio backyard, lying still on the grass. They thought he was dead—he had no feathers, was covered with oozing scabs and puncture wounds, and was ice cold. They picked him up with a tissue to throw him out, but he wiggled, so their parents brought him to a wildlife clinic.

Normally, wildlife clinics leave the tending and feeding of owl chicks to adult education owls of the same species. Adult owls have a very well developed nurturing capacity, and being raised by their own species eliminates the possibility of owlets becoming imprinted on humans. But Archimedes had a blood infection that required intravenous medication, he was emaciated so needed to be tube-fed and then handfed a liquefied diet, and needed antibiotic salves to treat infections on his skin, which led to him becoming imprinted.

After he was fully recovered, Archimedes quickly learned to hunt, but during the two times he was released, he kept approaching and alighting on people, even after the rehabbers tried aversion therapy, and so finally he was returned to captivity permanently. I have permits from the Minnesota Department of Natural Resources and the US Fish and Wildlife Service to keep one owl as an education bird, and had the great good fortune to acquire this perfect little bird. He and I are very bonded. Owls mate for life, and a mated pair and their chicks often preen one another. This allopreening reinforces their family bonds. I reinforce my bond with Archimedes by preening his feathers and nuzzling him, and allowing him to preen my hair and eyebrows. 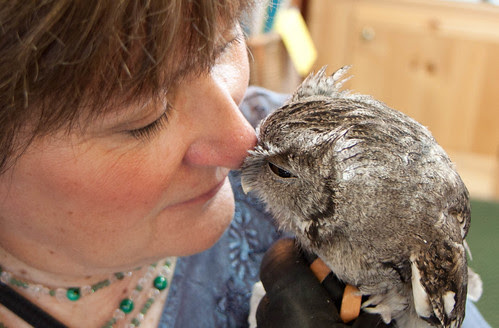 Because Archimedes is imprinted and because he’s so bonded to me, he’s very comfortable doing programs, even in crowded, noisy circumstances. He’s calmly dealt with Cub Scout pack meetings in echoing gymnasiums, all-school assembly presentations on brightly lit stages, and owl talks at book signings in chaotic shopping malls. People often comment about how well trained he is, but I’ve never trained him to do anything, and don’t like the thought of training a wild bird to do tricks. I’m actually showing a screech owl’s natural behavior. 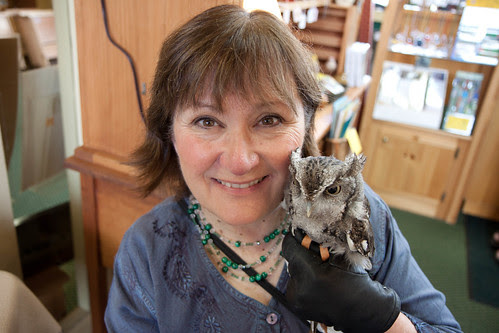 Most owls spend their daytime sitting quietly. Like cats, they are awake whenever they feel like it, day or night, but are specially adapted for nocturnal hunting, and don’t need to be active in daytime. When many songbirds, including crows, jays, and robins, see an owl, they attack, so screech owls usually spend their day inside an abandoned woodpecker hole or Wood Duck box. They can pop their head out to soak in the sun, but when even a chickadee notices them, they pop their head back inside. When Archimedes first came home with me, he spent his days inside a Wood Duck house in his big flight cage, but after a month or so, as he grew more comfortable here, he started sitting on open perches and hasn’t retreated into his box since except once when he was sick. 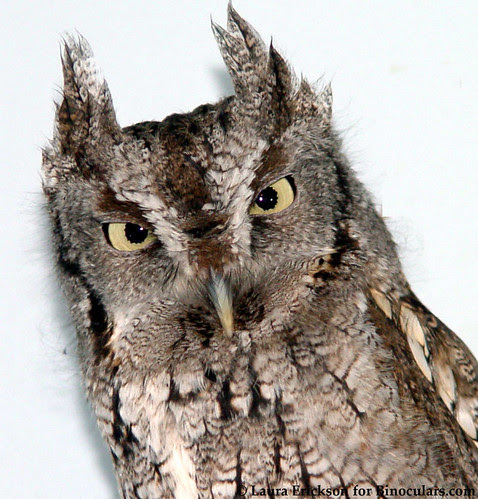 So when he and I are doing programs, it’s natural for him to sit quietly on my gloved hand. He’s used to and comfortable hearing my voice, and if I sense him getting nervous, I just preen him a bit, which instantly calms him thanks to the natural behavior of allopreening. During programs, Archimedes is simply demonstrating how normal owls behave. He is certainly adorable, but more and more I’m growing uncomfortable with how many people exclaim that he’s as cute as owls they’ve seen on YouTube. Tomorrow I’ll explain why these videos make me so uncomfortable.