Every year during nesting season, people ask if it’s possible for wild birds to produce twins--two chicks from a single egg. Chicken eggs from the grocery store occasionally include some with double yolks. One researcher in 1849 claimed to have a chicken that laid 10 double-yolked eggs, which he allowed her to brood--9 hatched, producing 9 pairs of twins. However, this has never been replicated. In one study of more than 1100 chicken eggs, double yolks were found only 3 times--that is, in less than 1/3 of one percent. In another, larger study, 2.8 percent of chicken eggs were double yolked. Very few double-yolked eggs hatch. In that large study, 208 double-yolked eggs were incubated and candled periodically to determine if they contained viable embryos, and eggs were examined after the embryos had died. Over 64 percent of the embryos died within the first 7 days. Two of the eggs--less than one percent, pipped, and only one hatched into twin chicks. There are apparently two peaks of mortality, one about a third of the way through development, and another near hatching--apparently the two chicks against each other have a very difficult time bracing themselves properly to pip the egg.

The yolk contains all the nutrition a chick embryo needs to develop to hatching, so that’s not an issue for birds inside a double-yolked egg. The problem is that two embryos need twice as much oxygen as one, and their growing bodies cause the egg to lose water faster. The pores of an eggshell are designed to provide oxygen intake for one developing chick. And as they grow, each bird blocks the other from properly filling the available space. 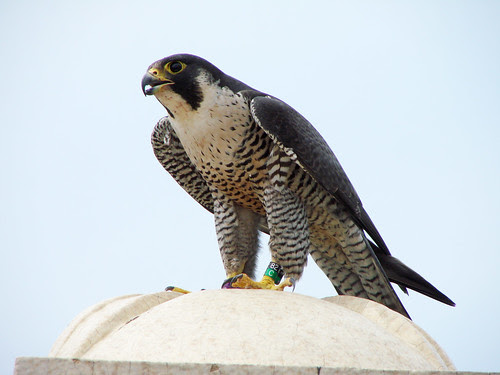 There are two ways a double-yolked egg can form. The hen may ovulate two eggs at once, or she may ovulate properly but one yolk gets stuck in the oviduct longer than usual. When she ovulates next, the second yolk moves down with the first yolk, and both end up together where the shell is formed. A case where this seems to have happened in the wild was in 1981, when an unhatched Peregrine Falcon egg from Greenland was examined as part of a study on pesticides. The egg was both longer and wider than a normal Peregrine egg; its volume 35 percent larger. Inside this double-yolked egg were two dead embryos, one that had died at about 24 days of development, the other at 22 days, so both had reached the fourth quarter of incubation. The younger embryo was more deteriorated and decomposed. The researchers believed that after this embryo’s death, decomposition polluted the egg enough to kill the other embryo. Besides that poor doomed Peregrine egg, there are a handful of known cases of twin embryos in the wild. American Goldfinches, Song Sparrows, and Brown Thrashers have produced twin embryos. There are also several known cases of embryo twins in waterfowl, but only because such a large number of duck and goose eggs have been studied for various reasons--fewer than a half of a percent of examined wild waterfowl eggs have had twin embryos. Interestingly, in several cases the twins weren’t the fraternal twins associated with double yolks, but identical twins, caused when a single fertilized ovum, or yolk, divides into two separate individuals. One 1974 study which included both wild waterfowl eggs and duck eggs inside temperature-controlled chambers found that cold temperatures before incubation could lead to this kind of twinning. None of the embryos in this study survived to hatching.

So twins are possible but unlikely in the world of wild birds. Those grocery store eggs with two yolks are genuine rarities.