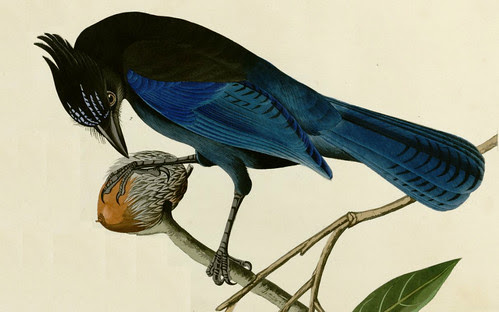 Yesterday I announced that this is National Blue Jay Awareness Month, and immediately got an email complaining that I wasn’t making it National Steller’s Jay Awareness Month. My program has a fundamental bias toward Eastern species because I’ve only lived in the East. I’ve seen thousands of times more Blue Jays than Steller’s Jays, and I prefer talking about things I know about. But a lot of people do listen to my radio show via podcast or look at my blog, which has the scripts, and I have indeed seen my share of Steller’s Jays, so today we make a poor attempt to give equal time to a Western bird.

The first thing I noticed about Steller’s Jay, long before I ever saw one, was how “Steller” was spelled, in my field guide. 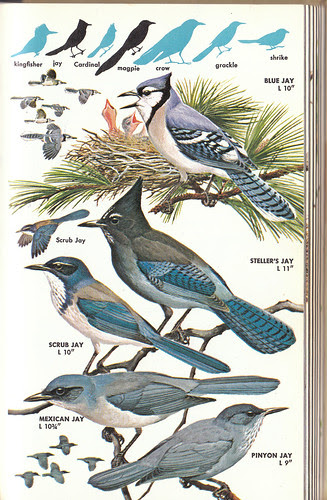 The bird is quite handsome—darker than a blue jay, some populations with deep blue crests, others with blackish brown, but all with virtually no white in their plumage. They’re certainly striking birds, worthy of the appellation “stellar,” but the name comes from Georg Steller, the ship naturalist on a Russian explorer’s ship in 1741, who collected and described many of the animals he encountered on an Alaskan island. He knew the expedition had reached America because the dark crested jay he saw was so similar to a picture of the Blue Jay he’d seen in Mark Catesby’s 1731 book The Natural History of Carolina, and it was nothing like any of the birds of the boreal forests of Siberia. Steller collected a specimen—a scientific way of saying he shot and stuffed one—but it was lost when the expedition was marooned on Bering Island. His field notes survived, and were detailed enough that the German naturalist Johann Friedrich Gmelin officially described the species using his notes. Steller’s sea lion and Steller’s Sea-Eagle are also named for Georg Steller, which is spelled s-t-e-l-l-e-r.

Both of North America’s only crested jays are noisy birds and excellent mimics, and are the only New World jays that use any mud in their nest construction. Steller’s Jay is tightly associated with coniferous forests, and far more focused on people than the Blue Jay. My first experiences with it happened within minutes of arriving at campgrounds in the West when my sister-in-law and I took a trip in 1979. Two other corvids, the Gray Jay and Clark’s Nutcracker, came in almost instantly and were alighting on my hands within minutes when I offered peanuts. The jays were more standoffish, but they readily swooped in and grabbed anything I tossed out. We stayed at the campground in Yellowstone for three nights, which was long enough to get one Steller’s Jay to finally alight on my hand for food.

Now feeding birds in national park campgrounds is no longer permitted, so Steller’s Jays don't consider us an easy source of food anymore. When Russ and I were in the Grand Canyon last fall, the Steller’s Jays we encountered didn’t pay the least bit of attention to us. 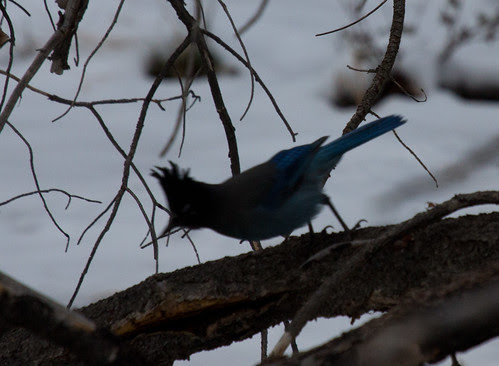 The West is, overall, a harsher and drier environment than the East, and many birds are more opportunistic than related Eastern species. In this case, Steller’s Jays are far more predatory than Blue Jays. Almost 90 percent of an adult Blue Jay’s diet is vegetal, and most of the animal matter is insect, but Steller’s Jays take more meat not just to feed their young but to eat outright themselves—they even kill and eat small adult birds such as juncos and nuthatches. Although they can be just as loud as Blue Jays, they aren’t in the habit of squawking at every little thing, because when they do spot danger, they often hope to capitalize on it themselves. And their dark plumage helps them hide within the shadows of the forest. It takes a bit more work to notice them, and I’ve yet to take a decent photo of one, but this handsome, spunky jay is quite worth searching out. 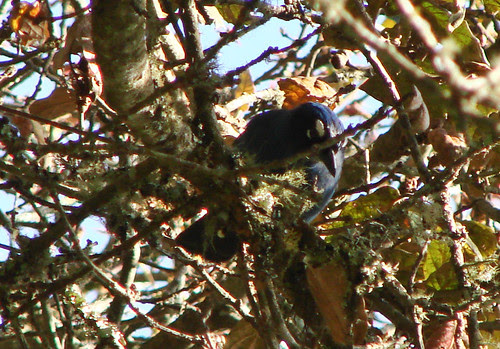