On March 22, 2014, a cargo ship collided with a barge, and at least one tank filled with 4,000 barrels, or 168,000 gallons, of fuel oil spilled into a 53 mile long shipping channel between Galveston Bay and the Gulf of Mexico—a channel bordered on both sides by prime migratory bird resting and nesting habitat. And this wasn’t just any fuel oil—it was bunker fuel—the thick, tarry, extremely toxic sludge left over after gasoline, motor oil, propane, and other products have been refined out of crude oil. Also called marine fuel oil, this is the stuff that powers container ships from China lugging all the cheap merchandise Americans so voraciously consume.

Hard as it is to believe up here in the frozen Northland, spring has already begun in Texas, with migrants crossing the Gulf and many species starting to nest. Bolivar Flats Shorebird Sanctuary, which attracts 50,000 to 70,000 migratory shorebirds to its perfect foraging habitat, lies just to the east of the spill. Richard Gibbons, conservation director for HoustonAudubon, told ABC News that “the timing really couldn't be much worse since we're approaching the peak shorebird migration season," and added that tens of thousands of wintering birds also remain in the area.

Oil floats, so thick rolls of floating plastic or absorbent material called boom ostensibly prevent oil from floating beyond it, as long as the boom stays in place and the water is relatively calm. After the BP spill, this kind of boom was supposed to protect breeding islands, but it never occurred to the powers-that-be to anchor it and, like anything that floats, the boom washed ashore right along with the oil. When I was in Barataria Bay after that spill, we saw their too-late effort to anchor boom after the islands had already been oiled. 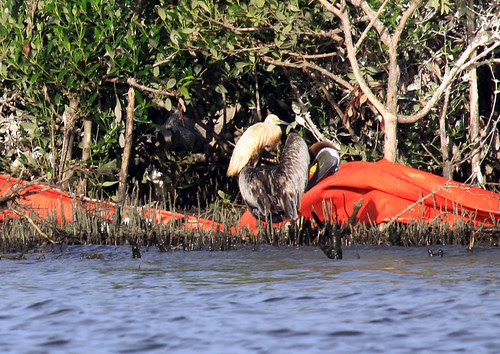 Things apparently haven’t improved since then—this weekend’s fog and rain, along with currents, the tide, and wind, made containment impossible, and oiled birds are already being found.

It hurts to see, over and over, this kind of disaster. This spill doesn’t involve nearly as much oil as the Exxon Valdez or the 2010 BP oil spill, and many people and news outlets only seem to consider record-breaking stories worth paying attention to, despite the many tens of thousands of birds in the oiled area right now and the uniquely dangerous properties of bunker fuel.

What is most infuriating to me is that in 2010, BP managed to set a new precedent in how oiled wildlife is counted--playing a form of Calvinball by changing the rules about which animals can be tallied. After the Exxon Valdez spill, every oil-covered bird, mammal, and other animal seen by responders was counted, whether or not it could be rescued or its carcass salvaged. But in 2010, BP somehow persuaded the government and environmental groups to let them limit the official count to animals that were actually picked up, dead or alive, making the total at least an order of magnitude less than the number of oiled wildlife seen by reputable observers. To skew the numbers even more to their advantage, BP also managed to get the government to limit the birds picked up to those completely incapable of flight. I was on a boat in Barataria Bay along Cat Island when we came upon a severely oiled Black-crowned Night-Heron. 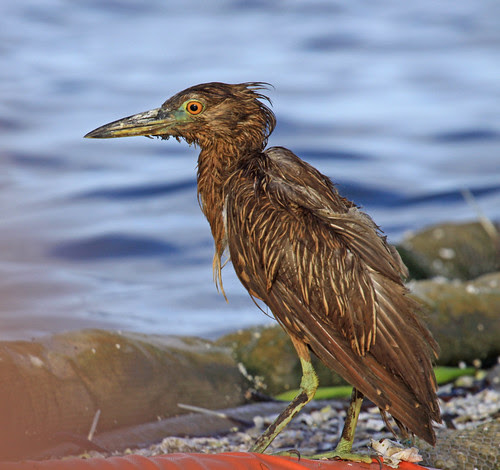 Our boat spooked the poor thing, and it fluttered at most a foot or two from the boom into the water and struggled onto the island, but even though we could easily have captured it to bring it to a rehab facility, the boat captain could not permit it. He told us that he would lose his license for retrieving a bird that could still fly, and by BP’s definition, that was flight.

Due to their excessively restrictive rules, only about 9,000 oiled birds were physically collected, and so tallied, after the BP spill. And to skew the count even further, somebody in power decided to prohibit anyone from collecting dead or badly oiled birds from any of the nesting colonies, too. Not one of the 10,000 adult birds nesting at the breeding colony on Raccoon Island is included in the official count, nor any of their young, even though scientists observing that colony determined that between 50 and 80 percent of those birds were oiled. The US Fish and Wildlife Service and even Audubon claimed that entering the colony to help save birds or retrieve dead ones might compromise the ability of any birds in the colony to nest successfully, but didn't seem to notice that this kept thousands of fatally oiled birds off the official tally. They also didn't seem to realize that people had been allowed to photograph and make movies of nesting birds on this island many times, but suddenly were being shooed away. No birds were counted in any other affected breeding colonies, either.

Despite BP being allowed to count oiled birds by such a completely different method to minimize the total, many sources still use their 4-digit total in comparison with the 100,000–250,000 birds oiled after the Exxon Valdez. It’s bad enough that corporations are so badly polluting our world—the least they can do is let us get a clean estimate of their destruction.