Spring officially begins on March 20, at least as far as astronomers are concerned—they must not stand outside very often. Paying closer attention to actual weather conditions and snow depth, some winter owls will be sticking around for at least a bit longer. Great Gray Owls do nest in northern Minnesota, though not right in Duluth. Right now, as winter slowly eases into spring, it’s “anything can happen time.” And to prove it, on March 16, I got a delightful email from Becca Mulenburg that read:

I just wanted to share a photo of my first sighting of a great gray owl. It happened this morning at my home here in Duluth, and because I listen to your radio show often, I remember you saying that crows often harass owls. So, when a murder of crows cawwed like mad in the trees above my house around 7:10, I looked out of our west window for an owl. Nothing. But I took note of how one of the crows that was very close to this window did not fly away, when normally it would have.  As you can imagine, my curiosity was really peaked. Then, I looked out of the south window, and voilà! There it was, perched just feet away from our house, so big and majestic.

I'm a big fan of yours, and just wanted to share. Attached is one of the photos I took of it. After it flew across the street and landed in a tree on the south side of Page St., the crows dispersed and left it alone.

I am so happy today for this sighting, it is very thrilling for me.

Becca added in a follow-up:


And yes, the crows were going insane! My husband commented, "There must be 50 crows up there!" He hadn't gone to work yet, so he was able to see his first great gray owl, too. I'm pretty sure there weren't 50 crows, but there were a lot! And I kept watching as more and more reinforcements kept flying in, so I was pretty relieved when the crows decided to leave it alone.

I’m thrilled that my talking about how crows mob owls gave Becca the information she needed to recognize what was happening, but it was Becca who was observant enough in the first place to notice.

When crows go ballistic, it usually does involve a large owl. The owl that represents the biggest danger to crows is the Great Horned Owl. Great Gray Owls eat very small rodents called voles almost exclusively, and simply don’t eat crow, but crows don’t discriminate—any and every owl they notice gets the same treatment.

On February 23, I myself had heard owls yelling so loudly that I ran outside—they were a few blocks away, yet the blood-curdling calls not just covered that distance but seeped in through our closed windows. Like Becca, what I found was a Great Gray Owl hunkering down. If it can sit tight long enough, the crows will eventually lose interest—if they succeed in chasing it off, at least a few of them may track it, and the whole cacawphony will start all over again, so the owl tries to sit tight with hopes that the crows will get distracted sooner rather than later.

This time of year, crows are calling a lot during courtship and early nesting, but when you pay attention, you learn to distinguish those everyday calls from the angry caws they make when they see an owl. Black-capped Chickadees also call with what sounds like an angry edge to their chickadee-dee-dee calls when they spy a Boreal or Saw-whet Owl. You can’t hear chickadees nearly as far as you can hear crows, but paying attention to any angry bird in nature can be even more rewarding than the video game variety. 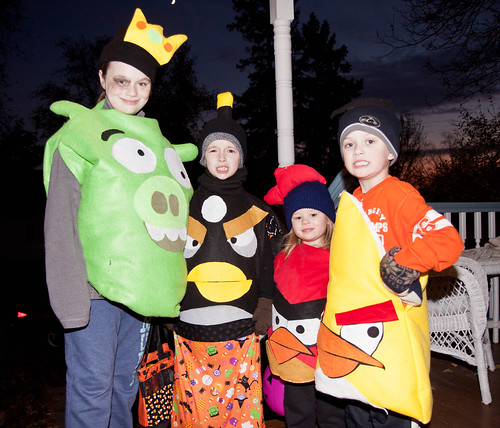