A Tale of Two Mortimers 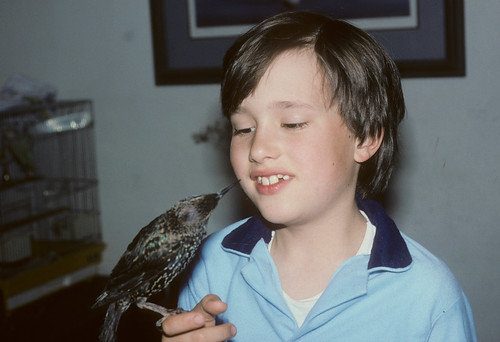 Back in 1989, I came into possession of a baby starling—a nestling whose eyes were still closed. It’s technically illegal for rehabbers to release invasive exotic birds into the wild, so our family decided to keep him permanently. I had always had a place in my heart for starlings since before I even knew what they were—when I lived in the dorm in college, I used to save some French fries from my lunch or dinner to put out on my window sill, and these plump, short-tailed birds with yellow bills and dark plumage spangled with white spots in winter and silvery speckles in spring would fly in to take them. A few years later when I got my first field guide, that was the first bird I looked up, based on my memories of those dorm birds. 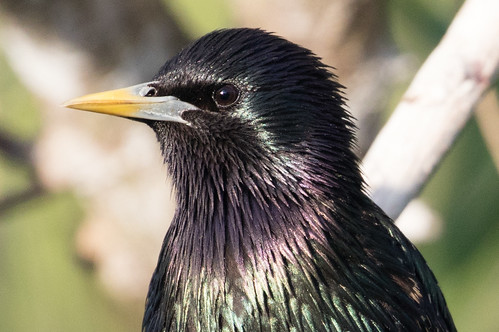 It didn’t take me long to learn that these cool little birds I was fond of were actually a big and dangerous problem for native birds here in America. A man named Eugene Schieffelen released 60 starlings in Central Park on March 16, 1890, and their population quickly exploded. Starlings are one of the primary reasons Red-headed Woodpeckers have declined, and they take out a lot of bluebirds as well.

Schieffelen’s goal in bringing starlings here to America was to “naturalize” every species mentioned in a play by William Shakespeare. In Shakespeare’s entire body of work, he mentioned starlings exactly once, never dreaming that one short speech would change the American avifauna forever. In Henry IV, part 1, in Act I, scene iii, the character Hotspur, who wants the king to ransom his brother-in-law Mortimer from a Welsh warrior, says:


He said he would not ransom Mortimer;
Forbad my tongue to speak of Mortimer;
But I will find him when he lies asleep,
And in his ear I’ll holla ‘Mortimer!’  Nay,
I’ll have a starling shall be taught to speak
Nothing but ‘Mortimer,’ and give it him,
To keep his anger still in motion.”

So of course we named our little starling Mortimer, and hoped to teach Morty to talk. My original plan was for me and the kids to repeat the word Mortimer over and over, and try to limit other sounds Morty heard, but this was a household of two talkative adults and children who were 3, 5, and 7, so it was pretty much impossible to limit what he heard to his name. 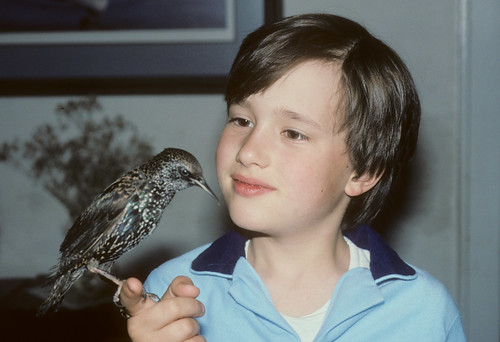 Our Mortimer made a lot of vocalizations, but in those days before cell phones and before I had good equipment at home, we have no recordings or videos. I wrote, at the time he was five weeks old, that when I read to the children, Morty broke out in an interesting song, making long sweet burblings that lasted for up to five minutes. Over the years, he learned to imitate a great many sounds from our home environment, including the phone ringing, the doorbell, and our smoke alarm. But Morty always strung these sounds together in long sentences along with jumbles of his own notes. And no matter how much we talked to him, Mortimer never learned to imitate a single word in the nine or so years we had him.

I think about Mortimer every March 16—the anniversary of starlings being introduced to America—and every April 23—the anniversary of Shakespeare’s death and the day many people celebrate his birthday. Even though he was a member of our family for almost a decade, I don’t think about Morty in my day-to-day life except when I hear a burbling starling making the same sounds he once did. But a couple of weeks ago, thoughts of our dear Mortimer flooded into my mind again, thanks to some emails I received from Timothy Flannery, who had his own starling that he named Mortimer for the same reasons I did. 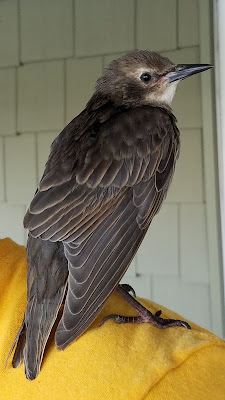 
Online recently, I happened upon the text of a For the Birds broadcast you made on June 19, 1989. You professed you were going to settle, once and for all, whether a starling could indeed be taught to speak nothing but "Mortimer," as Shakespeare would have us believe. You were raising a baby starling, which you had, naturally, named Mortimer.

Across the distance of thirty years later, the moment I read that text last week I felt compelled to contact you in order to ask how your experiment went back then. Did your Mortimer learn to utter "Mortimer," then?

I'm especially interested to know because last June I was blessed by the experience of needing to rescue a fledgling starling and of opening my home and my heart to the little fellow -- whom I promptly named...Mortimer. 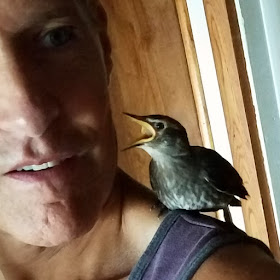 The story of raising him is long, as were the months of joys with which he filled the six months he spent with me and my family. We became so imprinted that a release to the wild would have been impossible; we secretly rejoiced, having embraced him deeply into our own flock. 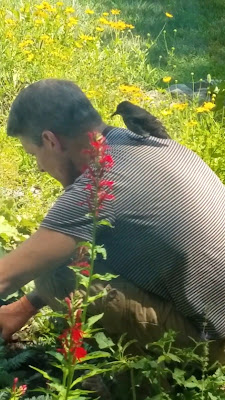 When he was about five months old, one evening on my shoulder as I was doing the dinner dishes, he leaned in to my ear and said, clearly as a bell, "Mortimer!" He repeated it a couple of times -- and continued in forthcoming days. He was clearly mimicking us calling and addressing him. He soon added "C'mere, c'mere!" and "Good boy!" So, please know that Hotspur's speech in Henry IV, part 1 is validated by at least one starling. Again, I'd love to know if we could call that two. 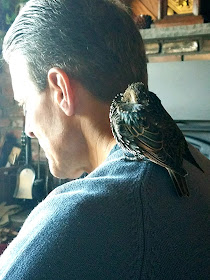 Very, very sad to say, my Mortimer had an accident a week before Christmas. Although he was extremely precise in his swift flight and, since cold weather moved in, had become very familiar and adept with the indoor space in which we gave him several daily opportunities to soar, either due the change of configuration based on the newness of the Christmas tree in the living room or because an oncoming snow squall had so changed the lighting and resultant reflections, poor Mortimer crashed into our plate glass window, severely damaging himself. He died in my hands as my nephew raced me in his truck through the squall toward the vet.

Life has not been the same since December 18th, believe me. Having grown up in rural Pennsylvania with a mother who loved all animals and allowed, even encouraged, me to have a diverse and long list of pets through the years, I can honestly say that Mortimer has spoiled and changed me forever. Being a recently retired Latin teacher, and having moved from Manhattan to semi-rural northwest NJ, I thought I'd probably want a dog (whom I could name Argo, of course, like Odysseus' faithful pooch). But now I am thoroughly captivated by the pronounced personalities of starlings, and truth be told, I just miss my dear talking bird so terribly.

As I negotiate my way through these starling-less doldrums, it would help mightily to hear the end of your thirty-year-old story, how you ended up faring with your own Mortimer. 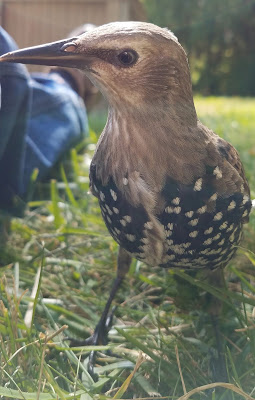 As I explained to Timothy, our own Mortimer never did learn to say any words at all, so I’m endlessly thrilled that his Mortimer did. And I’m especially delighted to know that a starling could learn to speak Mortimer, even if he couldn’t learn to speak nothing but Mortimer. Starlings are one of the very few birds we are legally allowed to keep as pets, because as an invasive, exotic species, they have no legal protections here in America. As both Timothy and I can attest, they are winsome, intelligent, and even though they don’t belong on the wild American landscape, are delightful birds deserving of respect and love.

Timothy shared some videos of his Mortimer. How I wish we had a video of our Mortimer!