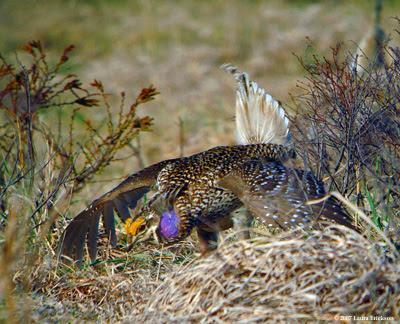 Oh, wow! I got up at 3:30 this morning to head down to Solon Springs to the Sharp-tailed Grouse viewing blind. It was the best ever! The full moon was obscured by clouds until just before it sunk in the western horizon. Being May, the temperature was pretty survivable--45 degrees instead of the 20s or lower 30s as it's been when I've come down the past two years. And I saw at least a dozen males and no fewer than four females at a time. It was really splendid. I brought my son Tom's video camera and got some great footage, but I don't know if I'm going to have time to go through it this week. I've got a few more things I have to finish today, a talk at our local Barnes and Noble tonight, a field trip tomorrow and several more things that need to be done, and then Friday I head to the Twin Cities for an all-day school program and then am speaking for the Ramsey County Birding Festival's kick-off spaghetti dinner Friday night. Archimedes will be along for those. Then Saturday Photon and I are off for Oklahoma!! We're going to be camping in the Wichita Mountains and learning about Black-capped Vireos--I'm so excited I could pop! Plus I'm going to get bazillions of photos and video of them and other cool birds. I'll be gone until the Manitowish Waters Discovery Center Birding Festival, on May 18 and 19th. My eyes are really tired now--that blasted Bell's Palsy has really done a number on my eyes! After a little nap I'm going to get back to work.

But meanwhile, until I get the video up, I did post a bunch of new pictures, all digiscoped, on my Sharp-tailed Grouse photo gallery. Some of my best Sharp-tailed photos ever!
Laura Erickson at 12:48 PM
Share