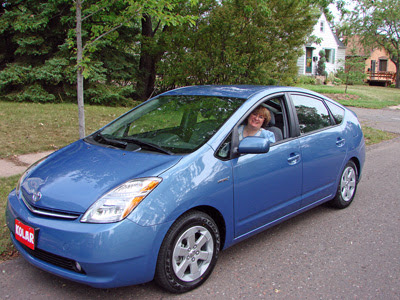 Back when I had a full-time job, our son Joe told us he needed a car and was looking for an affordable used Prius. We priced them, and they sure don't lose value very fast compared to most cars. Meanwhile, I was about to pass the 100,000 mile mark on our 2004 Prius. It's been a great car, averaging just over 5o miles per gallon and hasn't required a speck of work, but northern winters are hard on cars. We figured it would probably last a lot longer in Orlando than it would up here. So we offered to sell him our car for not very much money and we'd be the ones who bought the new one.

That was before I was unemployed, but we decided if we cut back on expenses we could still probably swing it, now that Katie's done with college. And our new car arrived on Friday. She's beautiful. Her name is Charley, after John Steinbeck's dog--we'll have our own "Travels with Charley" experiences. But to save money and natural resources, I'm not going to do any quick trips in her--I'll walk or bike to the post office, grocery store, or anywhere else within 2 miles. I'd bike up to Hawk Ridge if Seven Bridges Road was open--it's not as steep riding up from that direction as it is going up the hill on Glenwood Street. But I should even be able to do that within a few weeks if I work at it. Charley is not going to be allowed to go over the speed limit, and I'll do my very best to always live up to what I recommend in my book, "drive at the slowest speed that is safe, courteous, and convenient." And I've decided I'm not going to take her on any bird-chasing adventures unless I'm carpooling with at least one other birder.

She's been on two trips now--to Brimson for a program I did as part of their Petrell Hall Centennial celebration on Saturday, and to Port Wing to see Russ's mom and go to the town's annual Fall Festival on Sunday. We're averging about 54 mpg so far. And she seems to have great bird karma. My first bird while riding in her was an adult Bald Eagle. So far I've also seen Osprey, Broad-winged Hawk, Turkey Vulture, Ruffed Grouse, Common Raven, Gray Jay, Blue Jay, Black-capped Chickadee, Red-breasted Nuthatch, and American Goldfinch. And that's without specifically taking her birding yet!

New cars are like a new year--filled with promise about the lovely adventures ahead. And like the resolutions we make at the new year, I'm hoping I can keep my resolutions with Charley. And I'm hoping that even with trips like the one I'll be making to New Mexico next month, I'll be able to cut back on enough extraneous driving to keep the odometer from hitting six digits for at least five or six years instead of three. Charley looks like a great car, and I'm hoping to keep her for a long, long time.
Laura Erickson at 11:19 PM
Share