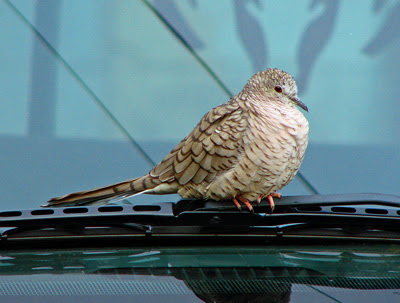 I drove out to Two Harbors today to see the Inca Dove that practically every serious listing birder in the state saw weeks ago. I've been out of town so much, and then this week I've been so sick, that I didn't have much chance to get away until now. Also, even though Two Harbors is the next city up the shore from here, it's still a 48-mile round trip, meaning I squandered almost a whole gallon of gas driving there and back. I've lost my stomach for most "chasing," especially because the waste of energy directly exacerbates global warming as well, but something about a tiny Texas dove turning up so far away from home seemed like a genuine miracle, and we can't just hop in our cars and head off to see a genuine miracle every day, can we?

But when I found the bird--on the exact block where the MOU hotline said it's been hanging out--suddenly I was filled with sadness, hungry for another miracle. The bird is so lovely, and so out of place on an icy, murky November day in the north, the temperature promising to dip much, much further before it rises again. Suddenly I didn't care about my Minnesota list--I just wanted the little bird to hightail it out of here and fly and fly and fly. Headed due south.

There is such a queasy strangeness to seeing such a bird up here. I've watched Inca Doves walking on pavement that had to be at least 120 degrees Fahrenheit, those fleshy feet unprotected from the hot surface, looking literally red hot. Today that same shade of red seemed icy cold--the shade of red my legs used to get under my nylons walking to my Chicago-area high school on frigid winter days, back when I was far too "grown up" to consider wearing snowpants. The dove hardly shares my adolescent pretense of sophistication--it's bare-legged because that's how doves are, and whatever impulse drove it to Two Harbors, Minnesota, choosing with intention and understanding to be so far north of its natural range was not part of the process.

If the bird disappeared tomorrow, we would have no clue what happened to it unless it was found dead in Two Harbors. If it did suddenly take to the sky and followed the highway down to the southern end of I-35, we'd never know if it made it short of a miracle. It's not every day we see a miracle, or even just half of one. But this miracle sure left me yearning for another one.
Laura Erickson at 5:51 PM
Share