One of the coolest things I did when I was in Guatemala in February was to climb up a volcano to see a Horned Guan. This is one of the rarest species on the entire planet, found only in a tiny and shrinking range in Guatemala, Mexico, and Belize. The guide who stuck with me on the long, long trudge up there (we started out at 2:30 am, driving an hour to the end of the road and then starting to climb using flashlights for the first two hours), as I traipsed well behind the other guides and people in our group, told me that I was 20 years older than his mother! He didn't mean it the least bit snarkily--he told me he was proud that I was doing something his younger mother, and most people half my age--wouldn't have even tried to do. The people ahead of us on the trail located two or three different birds, and kept track of one for us. Oddly, or perhaps wisely, none of them were lugging a scope or camera equipment, but my sweet guide carried my spotting scope the whole distance, and I had my camera, so we all got some photographic memories of this splendid bird. To me, the Horned Guan is even more of a cartoonish bird than the Roadrunner. And being able to say that I'm one of the oldest women to ever see one is a pretty cool thing. 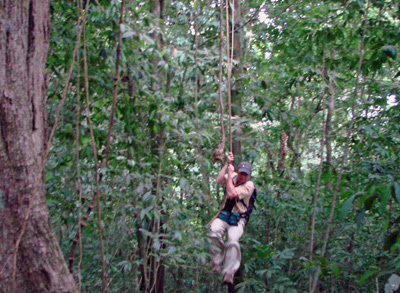 Well, I wasn't young enough to try swinging on the vines! 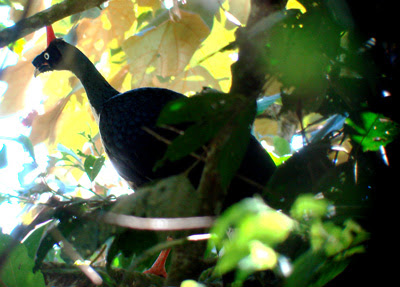 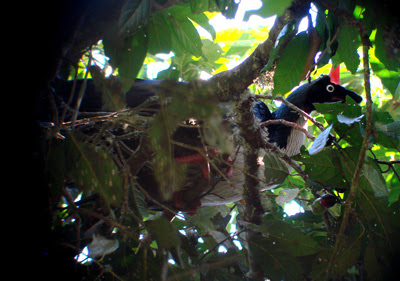 Isn't this the funkiest bird ever? 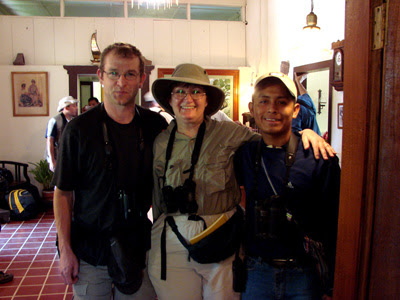 Back to earth! My sweet young guide who made sure someone old enough to be his grandmother got up and down safely is on the right.
Laura Erickson at 8:26 AM
Share