Death of an Ovenbird 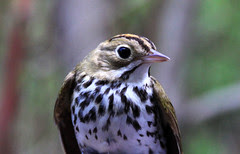 Ovenbird
Originally uploaded by Laura Erickson
On May 13, I took Photon for a very short walk at 6:10 in the morning. We headed back to our apartment at 6:15, and there on the doorstep of my apartment building was a dead Ovenbird, still warm. It had apparently come down to earth after flying hundreds of miles overnight, was skulking about in the shrubs around the building, and the porch light or hall light bewildered it and it crashed into the glass door. I live in a large apartment complex. My apartment happens to be the one next to the office, which is why there’s an outside glass door at all—none of the entries to the other buildings, and neither of the other two entries to apartments in this building—are enclosed at all. I’d been thinking how lucky I am to be in one of the handful of apartments in the entire complex that has an enclosed entry—I don’t have to go outside, even momentarily, to get my mail or go down to the basement laundry. But that poor Ovenbird paid a heavy price for such a minor convenience.

When I was in Guatemala two years ago, I spent quite a bit of time with an Ovenbird. He or she had a winter territory near the conference center I was visiting. Whenever I could break away for a few minutes, there the bird would be. It was fun watching it go about its business, not focused on nesting or feeding young but on just living day to day. That bird had flown thousands of miles to get there—perhaps it, too, had come all the way from Minnesota, but it didn’t arrive in the comfort of an airplane but after millions of wingbeats, flying entirely on its own power. While I was there, the weather was beautiful, but there were other dangers for a little Ovenbird—snakes and large lizards that could snap it up in a single bite, army ants that could envelope it as it slept, and a host of other predators. And in the tropics, Ovenbirds are still vulnerable to windows—while I was there, an Ovenbird was found dead beneath a window.

For some mysterious reason, Ovenbirds are killed at windows and glass doors in disproportionate numbers—dozens of people over the years have told me that although they hear Ovenbirds on every summer walk through the woods, the only Ovenbirds they’ve ever seen were found dead under their windows. As I held this poor dead Ovenbird, still shrinking as the last vestiges of breath passed out of its air sacs, I could feel the tragedy of a bird, a fellow traveler on this planet coming so far, working so hard, to come to such a meaningless end so near to its destination. The irony and sadness cast a pallor on the rest of the day.

Gary Larson once drew a Far Side cartoon with the caption, “When birds hit the window of vulnerability.” He drew a huge brick building with just one tiny window and a bird hitting it with a big “Bonk!” He didn’t draw it carefully enough to be identifiable, but my guess is that bird would have had to be an Ovenbird.

The fact that I could be ironically detached enough from the tragedy of this Ovenbird death to think of a Far Side cartoon bespeaks just how removed from the individual lives of other species we can be. But John Donne’s masterful meditation on the connectedness between us humans is perhaps not as all-encompassing as it should be. No man is an island, entire of itself. And mankind is not an island either, entire of itself. Any being’s death diminishes me, because I am involved in the planet’s life; and therefore never send to know for whom the bell tolls; it tolls for thee."

(Today's radio program transcript. You can here the program on my podcast page--click on the title and wait patiently till it loads.
Laura Erickson at 6:38 AM
Share