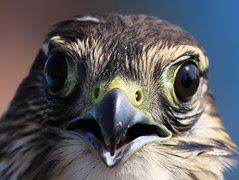 I wrote this in 1999, when my local grocery store, Loop SuperValu, still existed and Mourning Doves weren't yet legal game birds in Minnesota. It's somehow been "found" and picked up on a couple of hunting websites this fall. My favorite said, "I clicked the link thinking, oh great, so pansy, liberal, diatribe about protecting her poor, precious, defenseless birds... but was pleasantly surprised by her candid, forthright thoughts on our beloved passion." I still don't know what I really think about hunting.

The reason I hate death so much is that I love life so much. And herein lies the contradiction. I love the gentle goldfinch who lives almost entirely on seeds. From the perspective of the animal kingdom, this vegan lifestyle seems blameless. But from the perspective of the plant kingdom, the goldfinch is a ruthless abortionist untimely ripping tiny embryos from their flowery womb, denying them their birthright, ensuring that they will never feel the sun's life-sustaining rays. I love the soft-spoken nighthawk and bluebird, though tiny insects consider both to be vicious serial killers.

Every creature on this planet exists at the expense of others. Turkey vultures and carrion beetles and many maggots politely wait for animals to die of other causes before they partake of their bodies, but most animals are too vulnerable to disease organisms to risk scavenging except on fresh roadkills. Most meat-eaters do their own killing. A few steal fresh carcasses, or chunks of them, from predators, and many humans and ants appoint farmers and butchers from within our ranks to do our dirty work, but no matter what our station in life, from aphids to peregrine falcons, earthworms to human beings, the price of sustaining a body on this lovely planet is to leach the energy from other bodies, be they cauliflower or cattle.

I'm a scavenger. I limit my killing to mosquitoes and wood ticks--every other unwelcome visitor to my house or my skin, from spiders to deer mice, gets shooed away or tenderly taken outdoors and released. I understand the fact of death and derive my physical being from it, but it's too sad for me to look directly at it.

For me, predators are the most magnificently tragic heroes in earth's living drama. Of all the creatures on earth, they are the ones who face death with eyes wide open, killing with claw and teeth or talon and beak to maintain their life force. They don't celebrate death, they thrive on it until they succumb to it. They didn't choose their fate, and they don't shrink from it. Hawks and owls grab their vital vittles at high velocity, plunging talons into a still-beating heart and tasting blood before it even slows its course through veins and arteries, risking the probability that their quarry will fight back. They grab life with grace and gusto and guts, and seemingly take pleasure from outwitting, out-lasting, and out-fighting their prey. During migration, merlins and sharp-shinned hawks even dive-bomb enormous eagles and red-tails, playfully reducing grim life-and-death struggles into a game.

We humans can't remove ourselves from death, but we do our best to harness the risks of life. I pick up my chicken carcasses at Loop SuperValu, where they are fresh and guaranteed not to fight back. My brother hunts waterfowl, pheasants, and big game. But he isn't much more at risk in the vast Dakota back country where he spends weeks each autumn than I am in a busy Superior Street parking lot. Ironically, the two greatest dangers my brother faces while hunting are from his own heart seizing up or from other human hunters. He has a comfortable truck with a topper that shelters him from the elements, and he stands a safe distance from his quarry when he fires his shotgun. No way would, or indeed could, he bring down a deer with his teeth and nails, risking a kick in the spleen or to the skull. If he were quick enough and smart enough to grab a wild wood duck with his bare hands, I'm not sure he'd have the heart to break its neck. That gun holds him at a safe distance emotionally as well as physically.

At the end of the day, whether he's bagged his limit or come up dry, my brother stops at a grocery store or restaurant for dinner. He's hardly hunting to sustain his own life. Dead ducks are too messy to deal with at a campsite so he pops them in a cooler to deal with later, and he wouldn't dream of eating a deer until a butcher converted it into tasty sausages and parasite-free steaks. Since he doesn't particularly like venison, he gives most away, sometimes keeping the head to hang up as a wall ornament. His house is decorated with stuffed duck carcasses, too--a nuisance for his wife to dust, but beautiful in a Norman Bates kind of way. Unlike Norman Bates, my brother is not psychotic, nor is he fascinated with death and decay. He's simply a hunter--hardly a natural predator with his state-of-the-art weapons and clothing, but somehow responding to an urge as natural and as deep in his bones as the hunting urge of a hawk or owl. Can I claim moral superiority as a scavenger and quasi-vegetarian? Nope. We're simply two different kinds of creatures with different approaches to the life-and-death struggle that is demanded of every life on earth. We're all in this together.

Federal and state governments regulate hunting both to ensure that vulnerable wildlife populations will thrive for future generations and to protect species that hold unique and special places in our collective hearts and imaginations. That is the compelling reason why Minnesota and Wisconsin currently prohibit hunting of birds of prey, sandhill cranes, mourning doves, hummingbirds, songbirds, etc. Even with these safeguards I will never hunt, just as I'll never chop off a chicken's head. It's not in my nature. But I don't begrudge my brother the thrill and joy he takes from pretending he's a natural predator, as long as he limits his hunting to legal game species, treats their bodies with respect, and consumes or uses their bodies to support his own well-being. His desire to hunt is based on emotions as powerful and deeply-felt as my desire to avoid hunting, and I can hardly deny him the same thrills and pleasures I accept and even affirm in a peregrine falcon.

Are hunters capable of compassion? When food is scarce, a mother hawk or owl will sit by placidly as her bigger young kill and eat the smallest. Life or death are the alternatives, and the tiniest body may well provide the nourishment her larger ones need to stave off their own deaths. Yet that same mother, in the face of her own hunger, feeds and preens her tiniest, weakest babies with a tenderness that mirrors the gentlest, most nurturing human mother's.

In a well-documented case in 1922, a screech owl who twice lost her own brood in a single season adopted a nestful of baby flickers, and even tried to feed them pieces of a bird. She frequently incubated them, gently sharing her vital warmth with creatures that would normally be her prey. This ruthless predator allowed their real parents to care for them too, unmolested and without harassment. What, if anything, passed through her mind? Perhaps the same thing that would pass through my brother's mind if he suddenly found himself eye-to-eye with an orphaned fawn. I know my brother. I know that this SWAT-trained former Vietnam soldier, who has probably killed more deer than I've seen in my life, would bottle-feed a fawn with the same tenderness that I would, nurturing it until it was capable of living on its own, and then he would release it in a refuge where it could live out its days safe from hunting. A contradiction? Of course. That's life.
Laura Erickson at 2:38 PM
Share