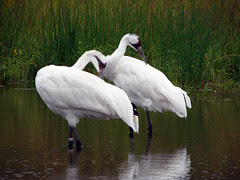 Whooping Crane
Originally uploaded by Laura Erickson
(Listen here)
Death of a Uniquely Important Bird
Ever since high school physics, I’ve been fascinated with the concept of entropy. Unless you put energy into a system, it starts falling apart, and the tiniest thing can destroy something that took a long time to organize or build. That made sense in the context of my daily life—everything seemed to fall into disarray if I weren’t constantly vigilant. Entropy is, of course, far more nuanced than a girl’s messy locker, but one of my favorite aphorisms is “entropy begins at home.”

Getting any system to work takes far more time and energy than we necessarily realize. The painstaking work of reintroducing cranes to the East is an example. Back in the early 1970s, a young ornithologist named George Archibald started doing crane research in Wisconsin and, with Ron Sauey, started the International Crane Foundation. In 1975, he was entrusted with a Whooping Crane named Tex. Tex had been hatched at the San Antonio Zoo in Texas in 1967, but was raised in captivity and completely imprinted on human beings. George won her trust, and she accepted him as her mate. In Spring1976, he moved in with her and flapped his arms about doing as close an approximation of a Whooping Crane dance as a human could. She completely accepted him as a mate, and when she was receptive, he tried artificially inseminating her. In 1977, when she was ten, she laid her first egg. Sadly, it was infertile, but George Archibald kept faith. Finally, on May 3, 1982, Tex laid a fertile egg, which hatched on June first. So much work had gone into getting Tex to produce her first chick, but now the future looked much rosier. This little guy was named Gee Whiz. And then just 3 weeks later, Tex was killed by raccoons.

Cranes at the International Crane Foundation are virtually always raised by Whooping Crane pairs, and when some exception must be made, the young birds are now raised by costumed humans holding an exceptionally accurate and life-like Whooping Crane puppet which feeds and strokes the young birds and makes lifelike vocalizations in the contexts real Whooping Cranes would in communicating with their young. The decades of research that made all this possible, and the painstaking work in this past decade to first see if puppet-imprinted Sandhill Cranes could learn a migration route following an Ultralight airplane and then find their way back and lead a normal life, and then breeding enough Whooping Cranes to conduct the experiment on them, culminated in an extraordinary success in 2006, when two cranes that had followed an Ultralight to Florida in 2002 successfully nested in Wisconsin, producing the first wild Whooping Crane in the Eastern United States in over a century. Black flies have caused serious problems for the cranes in the following summers, but cranes can have a long lifespan, and this couple was our best hope of rearing more babies to eventually make this population self-sustaining.

But entropy reared its ugly head once again the weekend after Thanksgiving, when someone shot and killed this female as she and her mate rested in Indiana during their migration. The NRA is right that guns don’t kill people or Whooping Cranes—people kill them. And hunters are right that the vast majority of hunters love wildlife and really do support conservation and know what they’re seeing before they point their gun at it. But I don’t think either group fully appreciates the skepticism people like me have, after seeing time and time again what a single pull on a trigger can destroy. Right now the US Fish and Wildlife Service is offering $2500 for information leading to the arrest and conviction of whoever committed this senseless act. I’d love to see hunters and the NRA lead this quest, putting some of their vast resources into not just catching and convicting the criminal, but also testifying at the sentencing hearing to ensure that this time, the judge gives more than just a gentle slap on the wrist to whoever slaughtered this magnificent bird on who carried so many hopes on her magnificent wings. Whether the momentary blast that destroyed so many hopes and dreams was made by accident or maliciously, attention must be paid.
Laura Erickson at 7:30 AM
Share