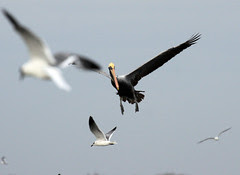 Brown Pelican
Originally uploaded by Laura Erickson
(Transcript of For the Birds, June 8, 2010)

My godfather, my Uncle Dick, was a sweet, sentimental Chicago firefighter who took pride in being 100 percent Irish. I spent my adult life living pretty far from Chicago, so I saw him mostly at weddings and funerals, which were numerous in our big family. Uncle Dick and I gravitated to each other because we were both rather quiet and both loved telling each other about our outdoors adventures. Dick was an avid fisherman his whole life. As a young man, he was also an avid hunter, but he’d put away his guns for good when he was in his twenties. Late in the evenings at our family gatherings, after he’d been drinking for a few hours and was in the weepy stage, he’d always tell me, as if for the first time, about the day he stopped hunting. He was out with a buddy and shot a Mallard hen. When the dog brought back the duck, Dick saw that she was still alive. He held her in his hands as he felt her breathing ebb and watched the light in her eyes go out. He couldn’t bring himself to eat her—he gave her and his gun to his buddy and never hunted again. But as if he needed to justify his continued fishing, he’d always say, “Fish are cold-blooded, Laura. I mean, really—they eat their young!”
Dick always had to reach a certain point in his drinking to tell me this story. And each time he told it to me, tears leaking into his beer mug, he emphasized how long it took that duck to die—and how he could see in the bird’s eyes that she was suffering, but just couldn’t bring himself to squeeze the life out of her. I don’t know which he felt guiltier about—shooting her in the first place or not being able to put an end to her suffering. Dick had rescued babies and children as a firefighter, and had pulled their dead bodies out of buildings, too—I think he’d felt the precariousness of life too often in his hands to use them so directly to squeeze the life out of even a duck. I stayed with him for a few weeks while he was dying of lung cancer from fighting all those fires. Even at the end, this dear tenderhearted man still felt guilty about the suffering he’d caused a duck.
When I took my first ornithology course, I read with horror about physiological studies done on animals in earlier decades, by scientists with more clinical detachment than my Uncle Dick or I could ever have mustered. In some laboratory experiments, Mallards, which aren’t even diving ducks, have lived as long as 16 minutes while held underwater, and remained alive as long as 27 minutes after their tracheas were clamped shut. In exsanguination studies, scientists have literally drained 1 percent of an animal’s blood every hour—the equivalent of draining a little more than one pint of blood from a 100-pound human being every hour. They learned that birds can lose much more of their body’s blood volume without going into shock than mammals can—pigeons can lose that volume every hour for 9 hours before dying. I wonder if those scientists watched the light ebb from their subjects’ eyes as they were recording the exact time of their deaths.
I’ve been thinking a lot about these gruesome studies and about my Uncle Dick as I’ve watched coverage of the millions of gallons of oil gushing in the Gulf of Mexico. A few news accounts have referred to “oiled feathers,” but the birds I’m seeing have oil gunking up their eyes, oil seeping into their nostrils and mouths and ears. I was just in Savannah, Georgia, last week watching Brown Pelicans plunging from great heights into the ocean—the way they’re adapted to catching fish—and felt sick thinking about the pelicans in the Gulf. Bewildered, suffering, but dying slowly, as birds do. Who from BP, Transocean Ltd., which owned the Deepwater Horizon rig leased to BP, and Halliburton, the contractor involved in cementing the well, is witnessing the light going out in these birds’ eyes? When a team from the Cornell Lab of Ornithology found an oiled but still-living pelican along with an oil-drenched Snowy Egret carcass, they called the BP wildlife rescue team, which took 90 minutes to arrive, and probably at least another hour to get it to their facility. These facilities can’t be everywhere along the coast, of course, but at times like these, I wonder how merciful it is that birds die so slowly.
Laura Erickson at 2:19 AM
Share