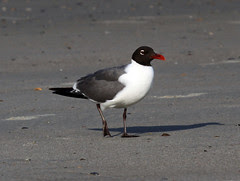 Laughing Gull
Originally uploaded by Laura Erickson
(Transcript of For the Birds for June 9, 2010)

I’m writing this script on June 8, 2010, Day 50 in the Gulf Oil Disaster. Current estimates are that Louisiana wildlife teams have recovered more than a thousand birds - most of them dead. Some survivors have been treated and then released in Florida. But these species have a built-in map and compass and a powerful homing instinct. Many or most of the adult pelicans are in the middle of their nesting season right now, and although getting oiled has certainly doomed their chicks to slow starvation, most or virtually all the birds released in Florida will most assuredly head straight back home, to ever increasing amounts of oil. The spill started out far from shore, and only 192 brown pelicans were brought into a Fort Jackson, Louisiana facility in the past six weeks, but reflecting the growing area of contamination, 86 were delivered just this Sunday. Many experts estimate that only 10–20 percent of oiled birds are ever found. I’m sure this is true in the case of large birds like pelicans and gannets, but suspect that the number of small birds that will be found in the muck will be less than one percent of the real number. How can we possibly find warblers weighing just a third of an ounce, or hummingbirds weighing just one tenth of an ounce, in a sea of black gunk?

Carcasses of large marine mammals may be equally hard to find unless they wash to shore. The Cornell Lab of Ornithology’s Bioacoustics Research Program is sending a team down this week to deploy acoustic monitoring devices to keep track of whale vocalizations—an exercise that promises to be as interesting as it will be depressing.

As more and more marshland gets contaminated in the coming weeks and months, the number of animals coated with oil will continue to grow, though news accounts will surely lose interest before birds and other wildlife stop dying. By late July and August, when our Northland birds start heading to the Gulf Coast and beyond during their fall migration, I’m afraid people are going to be too numb to even care. I don’t even want to think of the implications during the height of hurricane season.

Elections are coming up, but what name on a ballot can anyone really trust? A full 58 percent of active or senior judges in key Gulf Coast districts in Louisiana, Texas, Alabama, Mississippi and Florida have links to oil, gas and related energy industries, including some who own stocks or bonds in BP, Halliburton or Transocean, and others who regularly list receiving royalties from oil and gas production wells. We’ll be learning more and more about campaign contributions from various oil companies to both democrats and republicans, and maybe someone will uncover the truth about Dick Cheney’s secret energy policy meetings, but really, what can we possibly do with that information? The normal response will be to tune it out, and I’m sure plenty of other problems will crop up to distract us. The people who care most about the damaged ecosystem and the wildlife that depends on it will be frozen in despair or down in the Gulf volunteering to monitor water toxicity or engaged in the Sisyphean task of salvaging increasing numbers of migratory birds whose very natures doom them to head right back into the contaminated region. It’s only Day 50 of this nightmare, and the harsh reality is that the worst is yet to come.

But we are human beings—and I have to believe that our species includes more rocket scientists, poets, naturalists, and just plain decent people than greedy corporate sociopaths. Our species may be the only one on the planet capable of such mass destruction, but we’re also capable of compassion and ingenuity and large scale problem solving. How we face the coming weeks and months will test our worthiness as a nation, and a world. But we must take this test seriously. It isn’t just some everyday pop quiz—how we deal with this disaster may prove to be our final exam.
Laura Erickson at 11:58 AM
Share