Contacting my senators and congressman 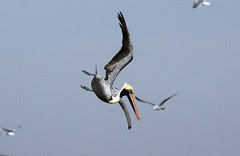 Brown Pelican
Originally uploaded by Laura Erickson
I just got off the phone after calling the offices of Congressman Oberstar and Senators Franken and Klobuchar. I made these points:

1) There are hundreds--maybe thousands--of people willing and able to help with bird rescue and cleanup. It would be an easy matter (and would have been an easier matter during the past three months) to get more people trained for rescuing oiled birds in the field and transporting them to experts, and to get hazmat certification.

3) Right now there are KNOWN breeding colonies where most or all of the remaining birds have been oiled and are dying or dead. These have been known for many days, with photographic documentation online from such prestigious and authoritative organizations as the Cornell Lab of Ornithology, National Geographic, and the American Birding Association. This situation has been relayed to the US Fish and Wildlife Service.

4) No one is helping these birds. No one. Birds are suffering and dying.

5) No one is counting these birds in the official numbers of oiled wildlife. http://www.deepwaterhorizonresponse.com/go/doctype/2931/55963

6) Marge Gibson, who has been involved in bird rehab in many oil spills--she is past president of both the International and National wildlife rehabbers organizations, has been involved in training people for wildilfe rehab (she is founder and director of the Raptor Education Group, Inc.), and was a project leader for Bald Eagle rehab after the Exxon Valdez spill said she has never seen trained and licensed rehabbers turned away from helping at these spills before. And in other spills, responsible people have been given training and allowed to get out there and pick up oiled wildlife (keeping away from recovery activities of course) so that the experts can focus on the actual treatment of wildlife.

7) I asked that they use their office to bring pressure on the U.S. Fish and Wildlife Service to make it much easier for people to rescue birds and to collect dead birds for a more accurate assessment of the cost to wildlife of this disaster.

The people who answered in all three offices were polite and professional. The man who answered in Congressman Oberstar's office said he'd connect me to their environmental person, but he'd stepped out so I'm to expect a call from him. The man I talked to took my name and phone number.

The person who answered in Al Franken's office tried to connect me with their environmental person but she was gone. He gave me her email address. Did not take my contact information.

The person who answered in Amy Klobuchar's office said she would relate my concerns to Senator Klobuchar. She was not interested in connecting me to anyone involved with environmental issues and did not take my contact information.

I do not know what legal constraints the U.S. Fish and Wildlife Service is under here, but they have never before used their authority to stymie legitimate, licensed, and expert wildlife rescue operations. This must stop.

[Added at 3:16 pm] Congressman Oberstar's staff environmental expert, Jason, just called me. He understood the issue, and will be drafting a letter to the Department of Interior today asking that U.S. Fish and Wildlife Service open up the process of collecting animals so people with hazmat training and training in rehab can help recover oiled birds. Keep your fingers crossed that this will help.