To disperse or not to disperse. That was the question. 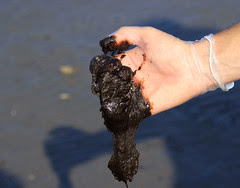 Oil from the natural beach at Grand Isle State Park, July 29, 2010
Originally uploaded by Laura Erickson
Now that well over a million gallons of COREXIT have been released into the Gulf, both from the site of the ruptured well and sprayed from above, we can expect years of debate about whether using dispersants was a wise decision or not. When many of the facts are unknown and we're dealing with probabilities, sometimes reasonable minds can reach different conclusions. But over time as we collect more data in the Gulf, we should be able to learn whether it is easier to clean up oil on the water's surface and on the beaches than it is when it's been dispersed. We want to know at what point dispersed oil droplets become too diluted to cause problems. Think about it. If you have 200 million gallons of pure oil, it's a big toxic mess. If dispersants dilute it to half strength by spreading it over double the volume, it's still extremely toxic, and now its toxicity has spread. At what point does the dilution make it weak enough to offset the vastly increased amount of water it's contaminating?

EPA research indicates that oil is far more toxic than dispersants, including COREXIT, and that for the most part, dispersants plus oil are no more toxic than oil alone. But in my mind, the debate is only tangentially about the toxicity of the dispersant, and more fundamentally about what the dispersant does to the oil and where dispersed oil goes. My focus of course is on birds, and it's virtually certain that many more birds would have been conspicuously oiled at this point in time if no dispersants had been used. But because the level of use of dispersants in this spill is unprecedented, we have no idea what the long term effects will be, on either the Gulf ecosystem or on the birds that depend on it.

Had the oil all surfaced at the point of the blowout, booms would have been more effective at containing it and skimmers more effective at pulling a lot of it out. But without dispersants, more thick crude oil would have contaminated beaches. With dispersants, the oil is breaking up into tinier droplets which can stay within the water column much longer before floating to the top in slicks or sinking into the bottom muck. We don't know how masses of oil are acting beneath the surface, nor whether the bulk of it will slowly float to the top to evaporate, will sink to the bottom to contaminate bottom feeding animals, or will float within the water column indefinitely. We don't know how tiny dispersed droplets in the water column might affect a loon or pelican diving through a plume. We don't know how long dispersed oil will be washing onto beaches, nor at what concentrations this dispersed oil will be, nor whether it's likely to reduce numbers of the tiny creatures that sandpipers and other birds eat. There is far more that we don't know than what we do know. The Gulf of Mexico promises to be a rich source of research projects for decades to come.

Meanwhile, it's too late to retract the decision to use dispersants to deal with this crisis. If substantial evidence proves that it was a big mistake, there will be no magic wand to get the dispersants out of the water. But now that it's happened, it's essential that we carefully and objectively evaluate all the evidence we can gather to figure out whether using dispersants really was the lesser of two evils or not. Bird deaths from starvation may not be as conspicuous and gruesome as bird deaths from heavy oiling, but the birds' suffering may well be as great. And depending on how plumes of dispersed oil act, we may be seeing oiled diving birds for weeks, months, years, or even decades to come.

The final decision on whether dispersants are an appropriate way to respond to an oil spill in the future should be made based on doing the greatest good for the entire ecosystem, from plankton and shrimp to birds and dolphins. The Coast Guard, the EPA, the US Fish and Wildlife Service, and the Centers for Disease Control should be making these decisions together, uninfluenced by the desires of the corporation that caused the disaster in the first place, especially when that company has a vested interest in minimizing the appearance of the disaster.

Exxon and a team of other companies are right now working together to develop a sounder response for dealing with future oil spills in the Gulf. Experimenting with dispersants in such a precious body of water when the stakes are so very high may or may not prove to have been justifiable. Either way, a sound, long-term investigation of the results will help us make future decisions based on knowledge rather than guesses.
Laura Erickson at 10:09 PM
Share