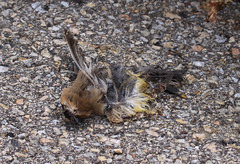 Cedar Waxwing killed by car on Goose Pond Road.
Originally uploaded by Laura Erickson
(Transcript of Wednesday's For the Birds program)
Ever since New Year’s Eve, stories have been making international news about birds falling dead from the skies. On January 6, Discovery News put it this way:

It has been a bad week for wild animals. Starting just before the turn of the New Year, 500 red-wing blackbirds died together in Louisiana. Some 100 jackdaws turned up dead on a street in Sweden. And in Arkansas, about 5,000 blackbirds were found dead after crashing into roofs, mailboxes and the ground.

On January 5, a report from Faenza, a town in Italy, said that hundreds or thousands of turtle-doves were found scattered in streets and yards and hanging from trees. Some of the birds bore a mysterious blue stain in their beaks. Other reports of dead birds came from Sweden.

Large-scale bird deaths aren’t uncommon. People walking the streets of Chicago, New York, or other large cities sometimes pick up dozens to hundreds of birds on mornings after peak spring and fall migration events, because so many birds flying through the night sky collide with lighted sky scrapers and communications towers. Much larger events occur occasionally. In Baton Rouge LA, in July 1896, a shower of birds including ducks, catbirds, woodpeckers, and warblers, fell from a clear sky, literally cluttering the streets of the city. This kill was explained as an aftermath of a storm off Florida. Many thousands of birds were found under a single TV tower in Eau Claire, Wisconsin, after heavy migration during a foggy September night in 1957, and again in 1963.
On September 11, 1948, thousands of migrating birds were killed when they crashed into the Empire State Building in New York City and into the transmitting tower of Radio Station WBAL in Baltimore. On the night of October 7-8, 1954, 50,000 birds of 53 species dropped dead on the runways of Warner Robbins Air Force Base south of Macon, Georgia. A low cloud ceiling apparently drew the birds to the ceilometer lights.

On March 13, 1904, at least three quarters of a million migrating Lapland Longspurs were killed overnight in and near Worthington, Minnesota. The birds came from the Iowa prairies in a vast horde, and from 11 P.M. until morning, they were killed by crashing against buildings, electric light poles and wires, and by dashing themselves forcibly onto the frozen ground and ice. On January 22, 1998, up to 10,000 birds, mostly Lapland Longspurs, were killed at a communications tower during a West Kansas snowstorm.
So large numbers of dead birds falling from the sky is not new. The largest recent bird kill seems to have been the one in Arkansas, which was apparently caused when illegal, professional-grade fireworks were set off at midnight. In Arkansas, blackbirds, robins, and starlings roost together in huge flocks, many numbering in the millions. I’ve spent January in Arkansas, and seen the amazing density of blackbird flocks there. Unlike many songbirds, these species do not migrate by night. If tremendously loud fireworks in the middle of the night set these birds off in a panic, flying helter skelter, they’d be colliding at high speed with one another and with trees, poles, wires, buildings, and the ground. Necropsies done on many of them established that the cause of death was internal injuries from blunt force trauma.

Final reports haven’t been released about the causes of the other bird mortality events yet, but there are so many known ways for birds to die, from pesticides to collisions, that I’m sure each one has a straightforward cause. But sadly, now that our news is driven by Facebook and Twitter, items that would have made at most a 1-minute closing story on the local news are suddenly worldwide headlines, and each report feeds on and tries to top similar stories.

Some news accounts of the bird deaths have included the most recent Apocalyptic predictions. Although Matthew 24:36 makes it pretty clear that no one can know the day or hour, some of these predictions get pretty specific, like one that sets it for this coming May 21. That happens to fall right in the middle of spring migration, so I guess I’ll have to skip the Apocalypse this time around.
Laura Erickson at 8:54 AM
Share