First bird of the New Year: What does it mean?


Every year on January first, the moment I wake up I head to the window to see what my first bird of the New Year will be. My hope is usually that it will be a chickadee or a Blue Jay. Both seem like excellent omens. Chickadees seem to promise a year marked with civility and good cheer. Blue Jays seem to promise a year marked with intelligence and good humor.
On January first, 1986, I opened a window shade to see a Great Horned Owl sitting right atop our big spruce tree. I was thinking at the time that it probably foretold a year of steadfastness and singleness of purpose. At the time I didn’t even imagine producing a radio program, much less sticking with it for 25 years, but 1986 does happen to be the year I started producing “For the Birds.”
One would think we’d grown a bit less superstitious since the days of augury, when people foretold the future by looking at bird entrails. My forecasts aren’t so gutsy, but they’re equally grounded in a fantasy-based rather than reality-based universe. But my predictions do at least acknowledge what a bird’s life is like. If someone’s first bird happens to be a goldfinch, I predict a year marked with either vegetarian dining or one in which they change their plumage a bit more than normal. Goldfinches are one of the only vegan species in the avian world, and they undergo a complete molt twice rather than the typical single time each year. 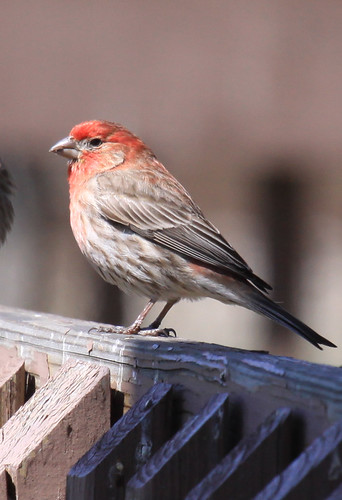 House Finches are originally from the Southwest and Mexico, but those released on Long Island back in the 40s have spread throughout the East, many living as far north as Duluth and beyond. So seeing them first may predict that this year, someone is going to pluck you out of your normal environment but you'll thrive anyway.

A crow predicts, in my system, a year marked by intelligence and clear communication.
A Downy Woodpecker might predict a year of cleverly adapting to more powerful neighbors and co-workers. This I base on the fact that downies often follow Pileated Woodpeckers to peck into the deep holes Pileateds dig. That gives the little guys access to bugs way too deep in the heartwood for them to reach on their own.
A Cooper's Hawk may mean the year will be filled with ruthlessness and focus. (Photo courtesty of Erik Bruhnke)
A Wild Turkey may foretell a need for wariness this year, but also indicates that you’ll have the skills and strength to defend yourself.

A Pine Grosbeak may signify hardiness and a year of excellent camaraderie.
A cardinal foretells a year filled with song and grace or, for baseball fans, a year when the St. Louis team will do really well, like it or not.
One of my friends spotted a Turkey Vulture first this year, and was naturally concerned about what that might foretell. I predicted a year of soaring to great heights. He might occasionally find himself dining on items that other people don't have a taste for, but I told him he’d seldom dine alone. He hoped it would also indicate a year of sleeping late every day, which made sense to me. When skies are clear, Turkey Vultures often sit on rooftops or bare branches with their wings held out, soaking in a few rays to drive off parasites and dry their feathers, so I predicted that this year he could enjoy relaxing in the sunshine whenever he felt like it.
If you see a Bald Eagle first, this year you may develop an unexpected interest in fish, or fall in love with a Pisces. Whether or not either of those things happen, you'll certainly have a year marked with strength, tenacity, and resourcefulness.
If your first bird is an American Robin, you may have a year filled with interesting travel that will prove enjoyable even though you won't have an itinerary. Part of the time, expect to feel convivial and sociable, but part of the time you're going to feel very prickly about others invading your personal space.
If you're lucky enough to see a Tufted Titmouse first, expect that this year when you see something that arouses your curiosity, you'll not be able to stop yourself from fully investigating. You may spend more time with close family members than with others this year. But unlike some relatives I could name, when you're headed somewhere, you go straight there, no undulating about it.

Seeing a Double-crested Cormorant as your first bird promises a year in which you'll explore your world more deeply than usual. Some people may not recognize your true character and attractiveness, but those who know you best all see how wonderful you really are. You'll have a good year working with your team.
If your first bird was a Dark-eyed Junco, you should be well-grounded all year. You may find yourself making more fascinating exits than entrances.
If your first bird of the year was a Common Raven, this would be an excellent year to take the SAT's, since you'll be at your peak in both verbal and mathematical skills. You'll find family communications are at their peak, too. You may occasionally find yourself picking on those who seem weaker, but you won't mean it maliciously.
Seeing a Pine Siskin first may indicate that you're headed for an extraordinarily sociable year. People who think they know all about you may be surprised at your unexpected comings and goings, but you'll know exactly where you are and why.
Many people see pigeons as their first bird. These birds signify a year centered on home and hearth. You are far more intelligent and interesting than most people suspect, but you don't care in the least that you are underestimated. You thrive no matter what.
If you see a Buff-bellied Hummingbird first, you're going to zero in on the competition this year and not give an inch. Your year will be marked with feistiness and high energy levels, and also with beauty. Your year may be exceptionally sweet, but more with regard to your diet and surroundings than your character. (Photo by Kay Baughman of her actual first bird of the year!)
The first bird of the year may or may not be an auspicious event in the classic tradition, but if we pay attention to the birds around us, we’re guaranteed a year of visual and auditory delights. And that’s a good thing no matter what species is our first.
Laura Erickson at 11:35 AM
Share
‹
›
Home
View web version