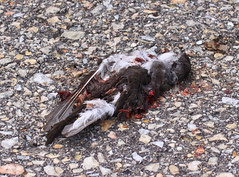 This summer, on a drive between Chicago and Duluth, my daughter and I stopped by one of my favorite birding spots outside Madison, Wisconsin. Goose Pond is a tract of restored prairie surrounding a lovely pond that serves as a magnet for migrating waterfowl and nesting grounds for songbirds, ducks, and Sandhill Cranes. Madison Audubon, which manages the property, has worked tirelessly over the past four decades to both restore the land and to work with nearby farmers, both encouraging them to manage their land in sustainable ways and to help them deal with any problem caused by birds. I was active in Madison Audubon during the years I lived in Madison, and Goose Pond is near and dear to my heart. Every time I drive along the nearby stretch of I-94, my personal tradition is to stop at the Arlington Rocky Rococo’s to pick up a slice of pizza to eat on the roadside next to Goose Pond while I scan for birds.

Katie and I stopped there in August. I love that time of year, when lots of newly-independent young birds are learning the ropes. The day was cool but sunny, and a lot of birds were gathered on the country road, basking in sunshine and picking up bugs.

But on this occasion, for the first time in the 35 years that I’ve been visiting Goose Pond, we came upon dozens of dead birds littering the roadside along the eighth-of-a-mile stretch. Apparently one or more trucks or cars had passed by at high speed, smashing into Cedar Waxwings, Tree Swallows, and Red-winged Blackbirds. I’ve come upon sights like this before, when my heart starts pounding. Every year there are fewer and fewer places where habitat is managed specifically for wildlife, and even those places are not safe. Merritt Island National Wildlife Refuge, one of the few jewels of natural habitat left along Florida’s Atlantic coastline, sits between Titusville and the Kennedy Space Center. The road cutting through it has a 55-mile-per-hour speed limit, and cars go much faster as drivers race to work or to visit the space center or beach. I go there every time we visit our son in Florida, and I’ve never once driven that stretch without seeing dead wildlife—sometimes literally hundreds of dead birds, after a car or truck plows through a flock flying across the road. When I started birding in 1975, I very often saw dead Red-headed Woodpeckers along roadsides. This beautiful species used to be so common that it was featured on the Pennsylvania Game Commission’s exquisite poster of birds commonly seen in backyards. Now in most of the areas where they once were abundant, Red-headed Woodpeckers have become so rare that if one is seen, it makes birding hotlines. Automobiles are also a major factor in the decline of Barn Owls and Short-eared Owls.

Dozens or hundreds of birds are killed every year near many individual ornamental fruit trees, after berries or crabapples start fermenting. The birds grow intoxicated, and collide with trees, buildings, cars, and one another. Some state DNRs provide educational pamphlets about plantings for birds, and strongly advise people to plant these trees away from roadsides and large windows to prevent the worst kills, but few people are aware of this hazard. Intoxication is apparently what caused the recent bird kill in Italy.

In the 35 years since I started birding, after DDT was banned, national and even local news media have been pretty much ignoring all of these bird deaths. Few people remember the thousands and thousands of dead Swainson’s Hawks littering South American farm fields thanks to pesticides barely a decade ago. But suddenly these stories are in vogue. Unlike when thousands of dead robins were being picked up in the 1960s thanks to DDT, this time the spin has nothing to do with protecting birds. In unsettling times, people who know nothing about birdlife are looking for evidence of a divine retribution. One minister even made national news by claiming that these bird deaths are proof that God is punishing us for ending the Don’t Ask Don’t Tell policy. A world without birds is apocalyptic enough for me, but none of the news media seem the least bit concerned about either declining bird populations or the tragedy of individual bird deaths—they’re seizing on the most bizarre storylines without the slightest glimmer of realization that the world we’ve created where these large scale bird deaths are becoming ever more commonplace really is a world where our own long-term survival as a species and our own quality of life are becoming ever more tenuous.
Laura Erickson at 9:03 AM
Share