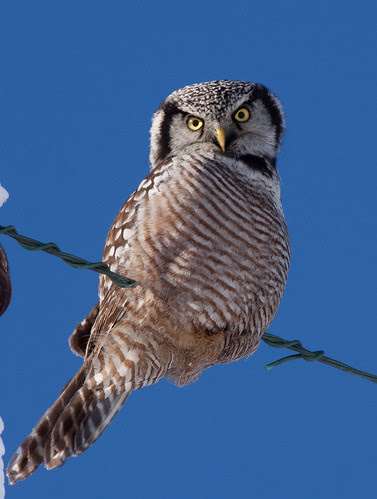 (transcript of today's "For the Birds")
This weekend I posted several photos of a Northern Hawk Owl that I’d photographed in the Sax-Zim Bog. Suddenly I started being bombarded with emails from a photographer who was upset with my photos. He said that someone has been feeding the owl and its mate pet store mice—a practice I publicly disapprove of. Some photographers bait owls in order to get close-ups and flight shots, but I don’t think the ends justify the means. Baiting owls can raise their expectations that people they encounter are going to feed them. This is especially dangerous with Great Gray Owls and Boreal Owls, who may then spend more time at roadsides looking for people when automobile collisions are one of the main causes of death for them. Attracting them to people isn’t such a critical issue in the case of Northern Hawk Owls, who tend to be curious about us no matter what. They have long been known to follow large mammals around hoping to grab food from them, as Gray Jays do.

But in the case of all owls, including Northern Hawk Owls, baiting also involves the issue of releasing non-native mammals into the natural environment if the mouse escapes, and the issue of salmonella poisoning if the mouse doesn’t escape. The Centers for Disease Control lists cases of Minnesotans getting sick from salmonella from handling mice from Minnesota pet shops. It’s simply not right to risk an owl’s life this way for a photo op. The issue of animal cruelty regarding the mouse is also an issue. Mice are natural prey for owls, but pet store mice have been raised in warmth and security. Tossing one out in the snow to be torn apart by an owl seems a doubly cruel end. In a country with so little compassion for our fellow humans, it’s not hard to understand that photographers may not feel compassion for rodents, but that brings them one step closer to not caring if the owl itself is killed by salmonella or a car, due to baiting.
Without baiting them, we can get plenty of close-range photos of Northern Hawk Owls, including flight shots, as long as we are patient. That’s a small price to pay to show our respect for an owl’s genuine wildness, to protect it from potentially tainted food, and to interfere with its activities as little as possible.

I like to think my stand on baiting is clear and inflexible, but I’ve violated it myself twice, though not for photography. During the huge Great Gray Owl invasion in 2004, an emaciated Great Gray Owl visited my backyard, and I thawed out and offered it one of the frozen mice I keep onhand for my education owl Archimedes. These mice come from a reputable supplier, so I was certain it was disease free, but I did risk teaching the owl to trust humans, consciously deciding in this case to err on the side of compassion. Later that same year, when I was caring for an emaciated Boreal Owl until it could get to the Raptor Center, one of my more experienced friends suggested that I give it live mice, because he’d found that Boreal Owls don’t often take thawed ones. I tried my darnedest to get him to take one of Archimedes’ dead mice, but finally had to try a live one. He ate it, but I’ve had too many gerbils as treasured pets to be able to deal with that on any kind of a regular basis. That little owl was the last predacious bird I ever rehabbed.

Each of us grapples with ethical issues every day. In the final analysis, we know when we have found the right path for ourselves when we trust our choice without worrying about what others think. An ethical code should be set high, a standard to aspire to, something that gives us pride when we do live up to it. When we’re trying desperately to justify our own ethical shortcuts, doing things that we’re uncomfortable admitting, or pressing someone else to lower their ethical standard to our level, it’s a pretty clear indication that we don’t believe in our own heart that what we’re doing is right. Birds lead lives of direct simplicity. In capturing their images, we should never risk harming them. In the final analysis, it’s just that simple.
Laura Erickson at 7:26 AM
Share