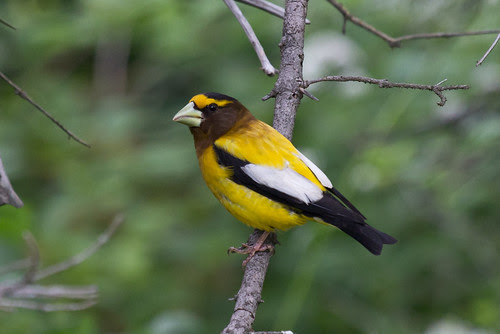 The 1980s was a perfect decade in my life. Russ and I moved to Duluth at the start of the decade, in early 1981, when I was pregnant with my first baby. Russ got busy with his job and home remodeling and I was busy with babies, so we were rather home-bound, especially after Katie was born, because she was badly allergic to mosquitoes. But the bird life in my backyard was so wonderful that I nestled in contentedly. We had way more birds than I’d ever imagined a backyard could hold, and no matter what the weather and no matter what the season, there were virtually always Evening Grosbeaks—sometimes a handful, and sometimes hundreds. Their pleasing sounds filled our house, even in the dead of winter through the window glass, providing the soundtrack of our lives. They called in the background during backyard picnic lunches, children’s birthday parties, playtime when children built snow forts or dug in the sandbox. When I washed dishes, I’d be watching Evening Grosbeaks at the feeder out the kitchen window. When I woke up at first light, the first sound I heard while still in bed was Evening Grosbeak music.

During the 1990s, Evening Grosbeak numbers started dropping. In the early part of the decade, once in a while I’d go a week or a month without seeing them. By end of the decade, not seeing them had become the norm. Now it’s been over a decade since I’ve had more than two in my yard at a time, and I haven’t had Evening Grosbeaks stick around for longer than a single quick meal at my feeder since 1997. The last time I saw one at my feeder, a lone female, was in 2007. This spring a small flock visited my mother-in-law’s feeder in Port Wing, Wisconsin, for a couple of days, and I saw a pair flying around in Port Wing in June.

Then last Thursday I woke up hearing Evening Grosbeak music out my bedroom window. Three or four were feeding in our box elders. They woke me on Friday, too. By Saturday and Sunday there were at least seven or eight, and they were visiting my husband’s cherry tree and raspberry patch as well as the box elders. On Monday they started eating at the feeders and taking drinks and bathing in the birdbath—and now there were at least twenty! I spent much of the day hanging out my upstairs windows or out in my backyard photography blind taking photos of them. Most of the birds are juveniles, some still begging for food from the adults. The adult females’ beaks are changing into the duller color marking non-breeding birds, but some of the adult males still have the grass green beak they develop in late winter, when they start feeding prospective mates. I haven’t been able to find any studies that confirm my suspicions, but I’m pretty sure that beak color is the signal young birds use to identify which birds in their flock are adults that may feed them if they beg. I’ve posted a lot of photos and a couple of videos of these birds, some identified as to age and sex, on my flickr photostream at flickr.com/lauraerickson. The birds were still there on Wednesday.

So for more than six days running, from sunup until sundown, my house has filled with the pleasing call notes of Evening Grosbeaks, and I’ve been filled with joy. I’m thrilled that my backyard flock includes so many juveniles—that’s a promising sign. I don’t know how much longer they’ll stick around Peabody Street, but every moment Evening Grosbeaks are in my yard is a moment to treasure.