(Transcript of For the Birds programs for August 26 and August 29, 2011, sponsored by Anne and Bob House. Thanks so much!)

When I got my first Golden field guide in early 1975, I spent hours poring over the pages, envisioning all the amazing species living in the wild right here in America—something this city girl from Chicago had never dreamed possible. One of the most surprising for me was the roadrunner. I’d grown up with the Looney Tunes Roadrunner, but it never occurred to me that the character always eluding Wile E. Coyote was based on an honest-to-goodness real bird. 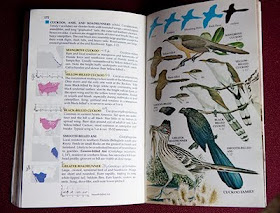 The Greater Roadrunner has the scientific name Geococcyx californianus, which literally means the ground cuckoo from California. As the scientific name implies, the first roadrunner to make it into a scientific collection was shot in the Golden Gate state. A young French surgeon-naturalist named Paul-Emile Botta served on a French merchant ship on a voyage to California from 1826 to 1828.

The voyage was a disappointment as far as trade went, but during idle times, Botta headed out on natural history excursions to shoot all kinds of animals, some for food for the crew and some for scientific collecting. In 1829, he presented the Duke of Rivoli with a collection of bird carcasses he’d preserved from the voyage. The Duke in turn loaned the specimens to ornithologist Rene Lesson of Paris’s natural history museum. Lesson is the one who saw the bird’s relationship to cuckoos, thanks to its interesting feet, with two toes forward and two backward, its long tapered tail, and some other body features. This poor dead bird is the official type specimen of the Greater Roadrunner. Ironically, that means a French ornithologist who never came to America gets official credit for “discovering” a bird very well known to native peoples for millennia. But some of those native people got back by pulling the ship’s captain’s leg with shaggy dog stories. They told him roadrunners trap large poisonous snakes within a circle of cactus plants, so that the snakes get pricked all around by the needles and end up biting themselves to death. In a book the captain wrote about the voyage, and then in other published accounts of roadrunners, these stories ended up being reported as fact.

And roadrunners have a wide variety of nicknames, including Paisano, Chaparral Cock, Snake Killer, and Medicine Bird. They’ve been persecuted because they sometimes feed on quail eggs and chicks, but they also take venomous scorpions, spiders, and rattlesnakes. A single roadrunner can kill smaller snakes, but they also work together in pairs to take on larger ones. Quail are probably better off having a few roadrunners around than not. Although roadrunners drink plenty of water when available, they don’t need to, thanks to salt glands in front of their eyes, which excrete excess salt from their blood.

Except in the cartoon world, adult roadrunners seldom have run-ins with coyotes, but coyotes, raccoons, skunks, crows, ravens, and large snakes often take roadrunner eggs and nestlings. The only predators that occasionally take adult roadrunners are Red-tailed and Cooper’s Hawks. My friend Bob, who put me up while I was in New Mexico, told me that once a roadrunner wandered into his shop and just kept hiding behind things. When most wild birds find themselves indoors, they head for higher vantage points. Bob thought this one might have been going through his office shelves because hidden among various industrial supply catalogs was The ACME Catalog, the sole purveyor of products used by Looney Tunes characters.

The cartoon Roadrunner produces a sound just about everyone recognizes. It was recorded by Paul Julian, a background artist for Looney Tunes. Although that’s a Merrie Melody indeed, real roadrunners make a call more appropriate for a member of the cuckoo family.

On December 27, 1978, when Russ and I were camping at Texas’s Falcon State Park, I saw my first Greater Roadrunner. I was so thrilled to see my lifer after months of anticipation that I had trouble falling asleep, and then kept dreaming about roadrunners. At sunrise, I took a walk and saw two or three different roadrunners sitting high in trees, holding some body feathers erect to direct the sunlight to their black skin, heating up their body after a night of torpor. I watched one of them fly out of the tree, make a long glide to earth, and instantly snap up a lizard. By then I’d read about all these behaviors I was now witnessing in person. Seeing them for the first time, in a beautiful setting on a solitary walk during a lovely dawn, filled me with a soul-deep satisfaction that still makes me smile.

We were in Texas for a week, and managed to see roadrunners often enough that I stopped recording every detail in my field notebook, but not so often that I ever said, “It’s just another roadrunner.” Since then, I’ve seen roadrunners on fewer than 20 occasions, in Texas, New Mexico, Nevada, Arizona, and California, so most of my understanding of this bird is based more on reading than reality. Even so, the magical encounters I’ve had with this bird sealed the roadrunner’s place in my heart.

When I was in New Mexico, I spent an hour when I was supposed to be paying attention to a seminar watching a roadrunner outside a convention hall window. The bird seemed to be examining her reflection in the glass, moving her head about while apparently maintaining eye contact with her image, but even as she seemed engrossed, if an insect or lizard moved anywhere within three or four feet of her, she instantly snatched and swallowed it.

She slowly worked her way along the windows of the large hall, and twice I changed seats to stay in line with her. When she reached the end of the windows and I lost sight of her, I went outside to watch her some more. She glanced at me occasionally as she worked her way down another line of windows, but was far, far less interested in me than I was in her.

When I was leaving Las Cruces, I had to stop at a border checkpoint, which surprised me because even though I was close to the border, I’d not left the United States. While I was in line waiting, a roadrunner stopped to take a dust bath right next to my car. I pulled up my camera, but as fast as a roadrunner snatching a bug, one of the homeland security guards ran up to my car and told me I was prohibited from taking any photographs there. I didn’t bother to argue—his charging toward me scared the bird off anyway.

Roadrunners maintain a long-term pair bond, and work together to defend their large territory year-round. Every year around their anniversary, as their hormones rev up, each pair goes through a series of elaborate courtship displays in which the male bows and prances, wags his tail, and offers nesting material and food items to his mate. She does most of the nest building while he gathers most of the materials, which include twigs, snakeskin, leaves, feathers, and dry flakes of cattle and horse manure. The female lays 3–6 eggs. The parents, who both have a brood patch, start incubating as soon as the first egg is laid, because protection from dry desert heat is as critical as protecting eggs from freezing. Both parents feed and protect the chicks throughout the 3-week nestling stage, and then for at least another month as the chicks become independent. Then the parents may produce a new clutch.

Studying nesting roadrunners is not for the faint of heart. Starvation is such a risk in the desert that occasionally a chick will weaken, grow lethargic, and stop begging for food. When one parent notices this, it tosses the chick into air and then either swallows it whole or feeds it to a stronger nestling.

Roadrunners are clever, fast, and fierce, but their lives are difficult and their world harsh—the oldest wild Greater Roadrunner known to the US Geological Survey’s Bird Banding Lab lived only 3 years 9 months. Even captive ones don’t survive much longer—the record for survival at the National Zoo was only 5 years 3 months. It seems brutally unfair that such a splendid bird doesn’t get to spend more time on this little planet. Fortunately, one individual Roadrunner raises the average lifespan of its species appreciably, because that one is apparently immortal.

Production of this episode of For the Birds was made possible by a generous grant from Anne and Bob House. I’m Laura Erickson, speaking For the Birds.

You can sponsor a For the Birds program about the bird of your choice.