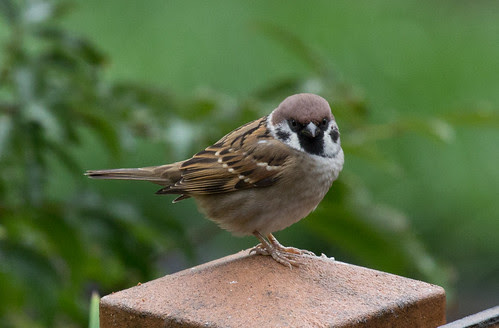 Last week I got to spend a couple of days visiting my good friend Susan, who lives in a suburb of St. Louis, a city famous for two birds. 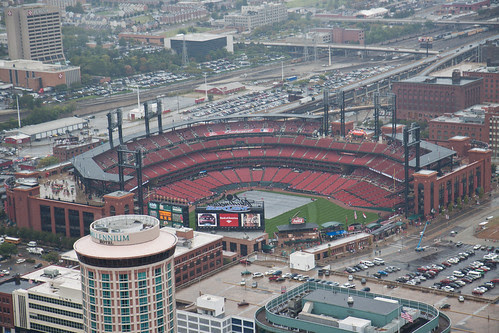 The St. Louis Cardinals are in second place, not just behind the Milwaukee Brewers in the National League Central Division right now, but also second to a tiny sparrow as St. Louis’s most unique bird. The only place on this whole continent where you can see a Eurasian Tree Sparrow is in the St. Louis area. These sparrows are smaller than their close relative, the House Sparrow, and males and females share the same plumage, which looks a bit like male House Sparrows but with a big black cheek spot that gives them a rather adorable expression. Only a true baseball fan would notice that the black smudges some major league baseball players put on their cheekbones to reduce glare are a similar field mark. 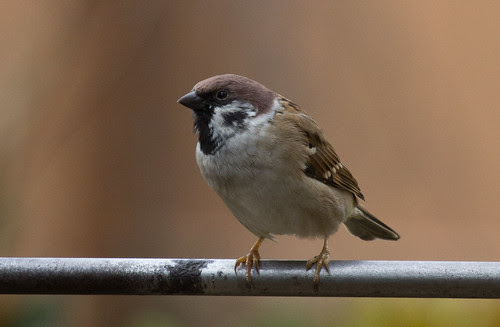 The first time I saw Eurasian Tree Sparrows was October 28, 2004, the morning after the Cardinals’ historic World Series loss to the Boston Red Sox—I made the trip specifically to add the tree sparrows to my life list, after someone on BirdChat offered to show them to me. Both the entire city of St. Louis and my birding friend were subdued that day, and the sparrows were shy and retreating, too.

The second time I saw them was in February 2008, after the Cardinals had migrated to Jupiter, Florida, for spring training. Susan and I visited one of her friends who had a few sparrows visiting her feeder. I saw only one or two birds both of these times and managed to get only marginal photos. I also visited Susan in July 2010 on my way to the Gulf. Unfortunately, that time I was just passing through and didn’t have time to try to see any Eurasian Tree Sparrows, much less think about baseball.

This time, with the St. Louis Cardinals trying their best to get a wild card berth on the postseason schedule, Eurasian Tree Sparrows were also doing their best. I didn’t have to visit anyone besides Susan—she had at least 20 in her own backyard, and they gave me plenty of opportunities to photograph them from her balcony. 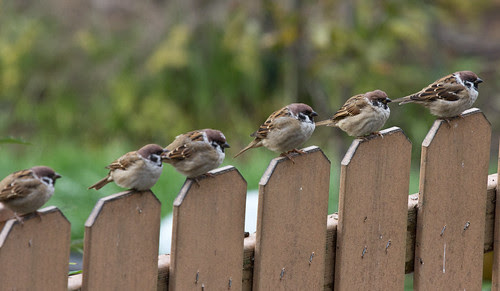 These little birds were brought to America by one of the “naturalization societies” popular in the 1800s, who tried to “enrich” various nations’ avifauna by releasing animals from other continents. One of these groups released a few sparrows from Germany to St. Louis in April 1870, a full twelve years before the St. Louis Brown Stockings were founded. Even without baseball, the little sparrows survived and reproduced, but their population never expanded beyond the St. Louis area.

Meanwhile, their big, bullying relative, the House Sparrow, was introduced to America many times during the 1800s, and increased and multiplied throughout the entire continent. 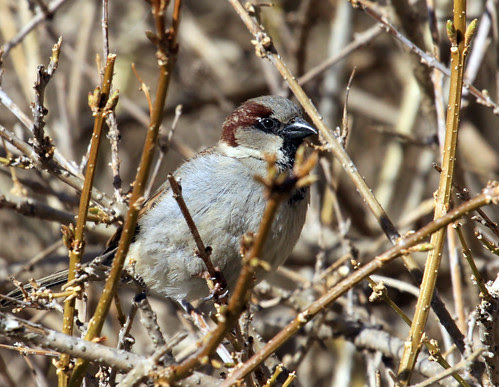 The baseball team evolved into the Cardinals in 1900, which they’ve remained for over a century, an example of grown men evolving into birds. In Europe and Asia, Eurasian Tree Sparrows show so much variation in plumage and size that the species includes up to 33 separate races. The German birds brought to the US belonged to the most widespread race. In the hundred and forty years since their introduction, some differences have been emerging between the American birds and their German ancestors. Whether our birds will ultimately evolve into a new species is an open question, but even though they can almost certainly play baseball better than the Chicago Cubs, it’s unlikely that Eurasian Tree Sparrows will ever make it into the National League. 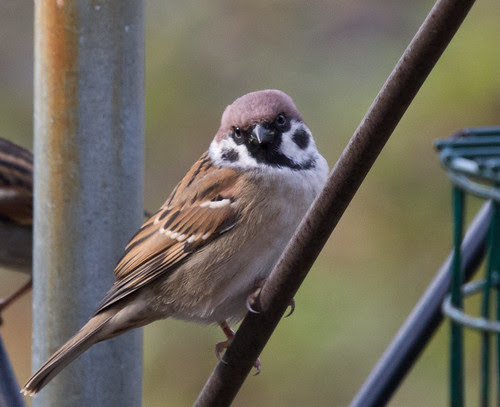