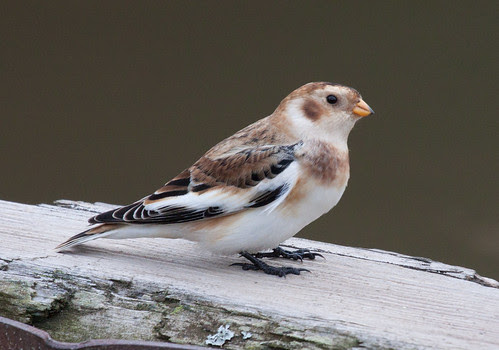 (This is repeated from last year's For the Birds)

[I'm headed to Philadelphia for this weekend's conference, Focus on Diversity: Changing the Face of American Birding, so pulled up a rerun for today's and tomorrow's programs]

This fall [that is, fall 2010], I’ve been watching flocks of all kinds of birds, from huge groups of sparrows and juncos to this year’s unusually abundant Blue Jays. I tend to focus on groups of birds in autumn, and I think of migratory movements in terms of populations or species, not individuals. But this week I took notice of the particularity of one bird I came upon at the Port Wing marina. 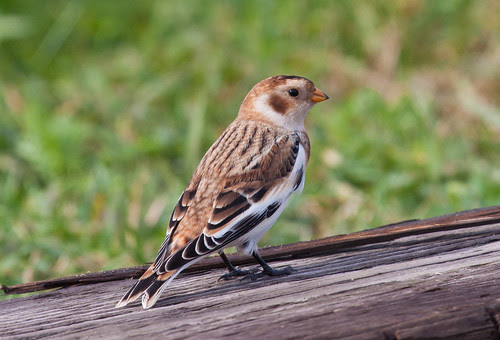 This Snow Bunting had made a journey spanning a couple thousand miles to reach northern Wisconsin from his high arctic breeding grounds. His flickering white wing patches caught my eye as he picked off bugs clinging to the side of a bridge—a narrow but vertical structure far enough above the rocks that the bunting had to hover to snap them up. Most songbirds cannot hover for more than a few seconds, and by the time I got my camera focused, the little guy had dropped back down to the rocks. 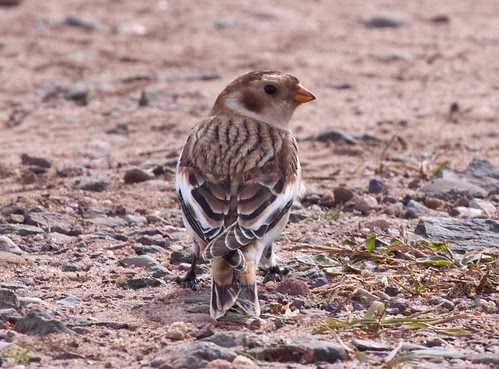 Snow Buntings usually associate in flocks with other Snow Buntings and occasionally longspurs or Horned Larks. I see them most often on the stubble of farm fields long after harvest, the birds eking out their existence on waste seed and bugs. They’re especially drawn to fields after a farmer spreads manure, a veritable cornucopia of insects and semi-digested grass seeds, often steaming with warmth. Of course, the steam also carries a certain level of odor, but songbirds aren’t gifted in the olfactory department and their sensibilities not so rarified as ours, so they don’t seem to mind at all. The landscape would seem barren and desolate if not for these beautiful “snow flake” birds. When a flock of Snow Buntings feeds on the ground, those at the back fly forward to the front, making the flock appear to be rolling along. This would be beautiful enough if done by any other species, but reaches ethereal heights thanks to their flickering white wing patches.

Snow Buntings are usually very gregarious, but their flocks are like families of squabbling children. Even during the times of year when they’re not defending a territory, Snow Buntings almost continuously bicker with one another. Many flocking birds establish a hierarchy to reduce the conflicts, but Snow Buntings are too independent to submit to the rules a hierarchical society requires. Those of us who witness their skirmishes are treated to a lot of beautiful wing flashing. If we’re not paying attention, we may not catch on that the birds are fighting. So being in the presence of bickering buntings is far more pleasant than being stuck in a car with bickering children.

Snow Buntings breed in one of the harshest environments on the planet—the high Arctic. They nest under boulders in boulder fields, in cracks in large rock surfaces, or cliff faces. Temperatures in these nests can be very cold, so the buntings line their nests with thick insulating layers of feathers, mosses, and grasses. 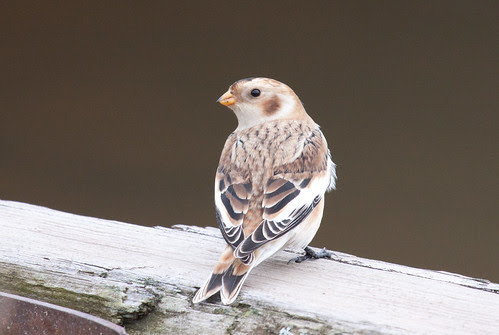 I wanted to tease out the entire history of the Snow Bunting I was watching—he moseyed about, allowing me to take 122 photographs at close range over the course of an hour—but he wasn’t talking. He didn’t open his wings again for me, either—Snow Buntings spend most of their lives on foot. So I couldn’t verify by the size of his white wing patches that he was a male, though that is definitely the impression I got when I first saw him feeding. His cap didn’t seem quite dark enough for an adult male, but even that wasn’t definite in fresh fall plumage. 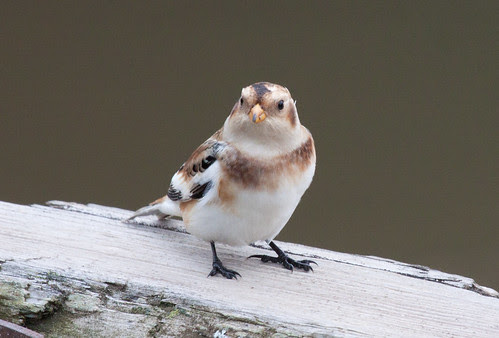 I was in Port Wing without my bird books, so I emailed my photos to my good friend Mike McDowell to see if he could figure out the bird’s age and sex. He wasn’t sure either, so he forwarded them to two top Wisconsin birders, Tom Schultz and Ryan Brady. Even though the photos show the bird very clearly, at high resolution and large size, none of us could be 100 percent certain without the bird in hand, though Ryan and Tom both had the impression of a young male, too. 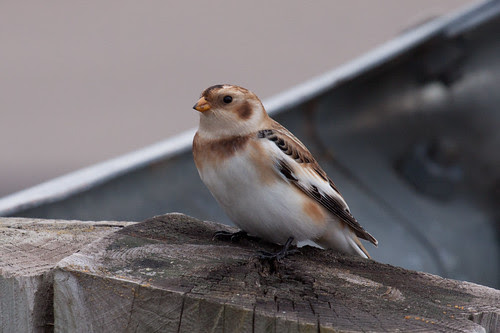 This added a mysterious flair to my encounter. I’ll never know if this was his first migration or whether he’s a seasoned traveler, whether he got separated from others by accident or by choice, how he chanced to be at the Port Wing Marina exactly when I was there, or even if he was a “he” at all. And I’ll never recognize him again if I see him, alone or in a flock. It was one of those lovely brief encounters we make as we pass through this lovely little planet. I’ll always remember him—those photos turned out well enough that I’ll be referencing them for decades—but I found him far more interesting than he found me, so I’m sure the moment I moved on, he breathed a sigh of relief to have that intruder out of his face and simply moved on to the rest of his life. 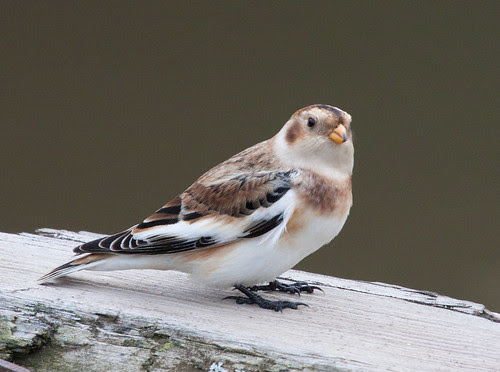