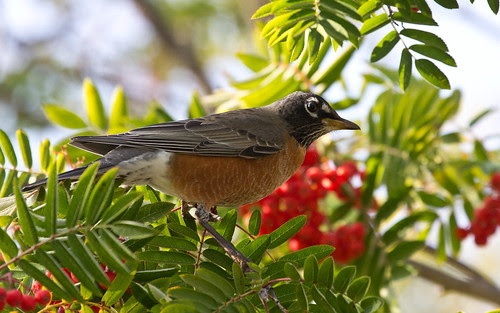 A lot of people have been talking about lower numbers of a lot of species of songbirds, but one species no one is particularly worried about is the American Robin. Providing manicured lawns and ornamental fruit trees help robins to thrive. Their numbers are often the highest of any bird species wintering in the U.S. based on the Great Backyard Bird Count, which occurs in February. 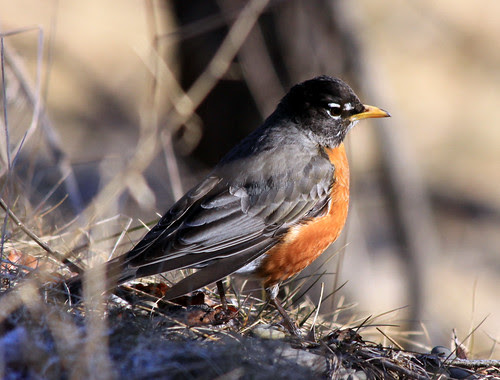 A week or so ago, robins were so thick in my neighborhood that in a single day they devoured every single berry out of my neighbors’ yard—and they had at least three heavily-bearing trees. Hawks were also thick that day—while I was working at my desk, a Cooper’s Hawk chased one gorgeous adult male robin directly into my window at high speed. The poor bird hit so hard it crashed to the ground, but the hawk just moved on, leaving it in its death throes. After it died, I moved it to the back of the yard where something ate it within an hour, leaving nothing but a pile of feathers. Not once all day was there a single moment that I couldn’t hear robins everywhere. The next day they were gone, and I thought the biggest wave of them had passed through. It was close to the anniversary of October 1, 1988, when I was counting birds at the Lakewood Pumping Station up the shore a bit from Duluth and counted over 60,000 robins in five hours, along with 30,000 warblers and various other birds. I was in such a numerical daze when I got home that I walked smack into a bag of sunflower seeds and was up to something like 738 before I realized I was counting them as I swept them up.

But the big flight a week ago wasn’t the end of this year’s robin migration—this week another huge flood rushed though. On the first hour of counting at Hawk Ridge on October 9, the counters tallied over 12,000 robins migrating over the ridge and down in my neighborhood, which is between the main overlook and the lake. Robins rushed through all morning, and by noon, the counters simply put 30,000+ on the count board. They had plenty of other things to be paying attention to: on October 9, they also counted 478 raptors. 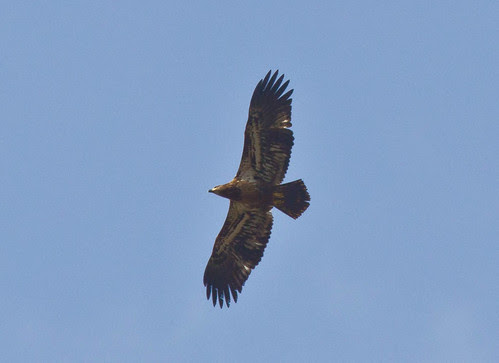 Meanwhile, down in my neighborhood, robins and Cedar Waxwings stripped the berries from my own mountain ash trees, dogwoods, and grapevine. 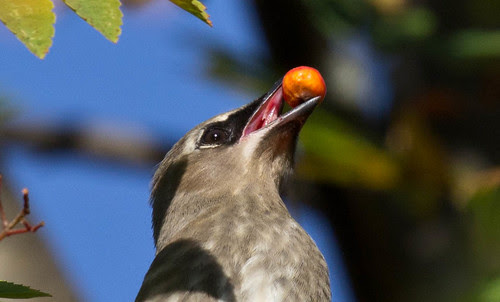 And the flight on October 9 had another witness. I got an email from Patty Mayer who wrote:

I live just above Skyline on the Duluth/ Proctor/ Hermantown border. At dusk I happened to glance out the window in the eastern sky and noticed a bunch of birds flying over. Not an uncommon sight this time of year, but they just kept coming. I ran outside to see them better: robins, and maybe some of their cousins. I watched what had to be THOUSANDS of birds fly over (heading SW). Too many to count as they flew, (1/2 block wide distribution) but there was a constant barrage flying overhead for literally five minutes or more. It was just so cool to see SO MANY flying right at dusk I wanted to share. 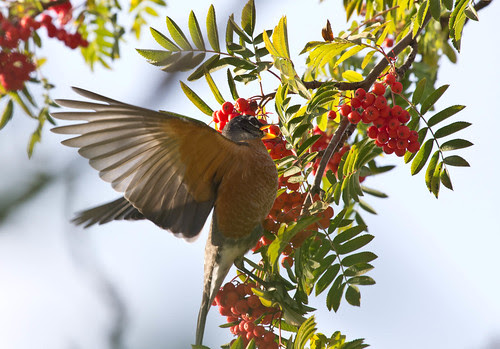 American Robins are abundant enough that a lot of us take them for granted. But this kind of breathtaking spectacle right in Duluth is one of the things that makes this city uniquely special. People grow ever more removed from nature with so many other things drawing our attention to the technological and economic. But anyone who didn’t stop and look up this week missed a thrilling experience.