The Day of the Condors 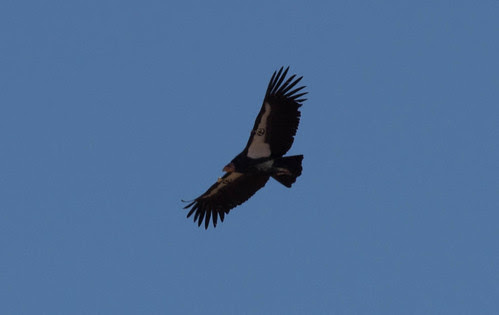 I spent my sixtieth birthday, on 11/11/11, in the Grand Canyon in order to finally see a California Condor. Heading to the Grand Canyon in November was an act of faith—faith that the weather wouldn’t turn horrible, and faith that my line of sight would actually intersect with the flight path of one of the few existing California Condors in Arizona. We made it to Des Moines our first night, and woke to almost a foot of snow and trees that had crashed down upon several cars in our motel’s parking lot. That seemed ominous, but our car was spared and we made it Flagstaff and then to our motel in Tusayan, just outside the national park, on the eve of my birthday without problems. 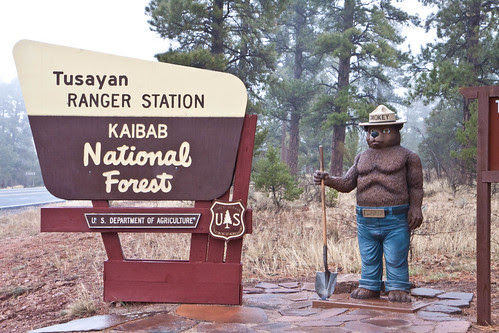 Russ and I started out my birthday hiking here and there along the South Rim, which was beautiful despite the woefully overcast sky. 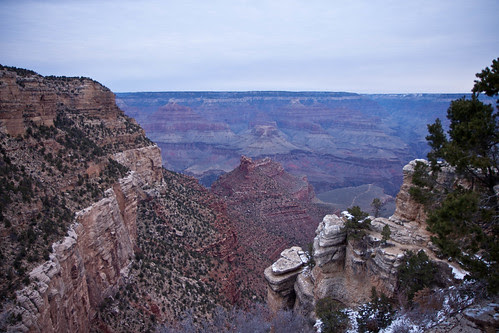 When the visitors center opened, we headed there to get suggestions about where to find the birds. The woman at the desk said we should come back in March. That wasn’t helpful at all, but I had no intention of getting discouraged. All day I kept my eyes to the murky skies, without luck. I had to settle for the gorgeous scenery and ravens wherever I looked. 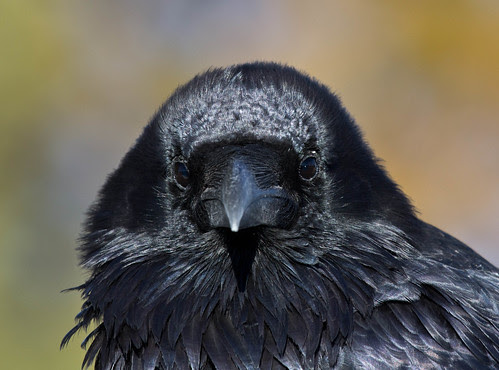 The daily program about condors was held at 3 pm. 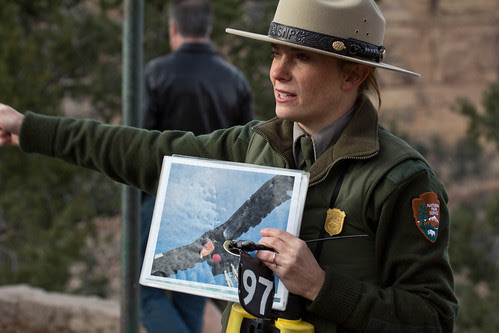 The woman giving the talk, a delightful and knowledgeable ranger named Elyssa Shalla, told us that most of the condors had already retreated to lower elevations further north, especially in the Vermilion Cliffs National Monument area in the border area between Arizona and Utah. There were still two nestlings in the Grand Canyon national park—they were six months old, but weren’t expected to take their first flight for another week or two. One was in a cave in a nearby formation called the Battleship, but the cave was on the opposite side, impossible to see from any vantage point on the South Rim. We could watch for their parents to return with food, but that happens only once every day or two, and sometimes the parents may even be gone for four or five days. 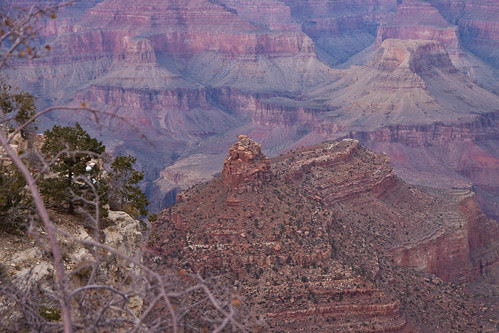 But Elyssa wasn’t at all discouraging—she said it was possible we’d spot one of the parents, and also said that our best chance would be at the Vermilion Cliffs site outside the park, where the Peregrine Fund releases them. This area has milder winter weather than in the canyon, which the birds prefer. Each bird covers a vast area—sometimes a hundred miles in a single day—but it was certainly worth a shot. 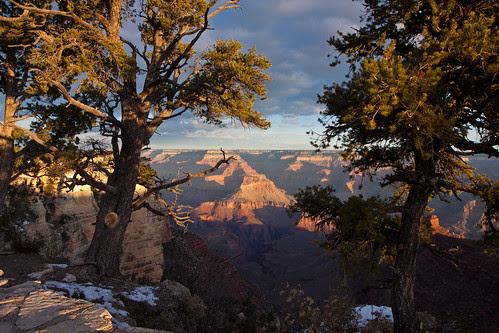 The next morning the sky was brilliant blue, with high winds—exactly the conditions that draw condors into the sky—as we drove to the Vermilion Cliffs. We missed our turn onto a tiny dirt road that leads to the site and found ourselves at the entrance to the Kaibab National Forest at the very moment when two condors were flying overhead. 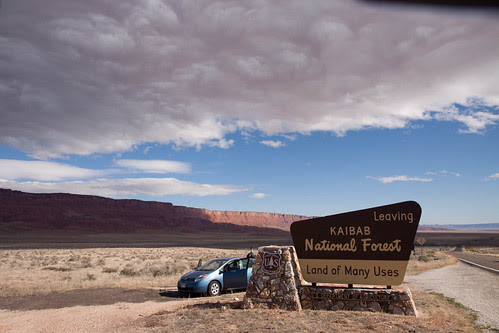 Even though they were very high up, condors are huge enough, with their 9-foot wingspan, that I got thrilling looks. 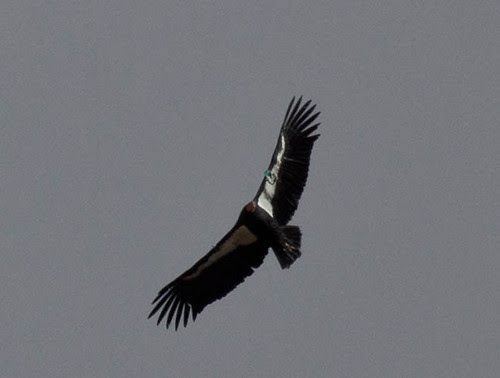 My photos are far from magazine quality but diagnostic. Russ even managed to get a photograph showing both me and a distant but visible condor. 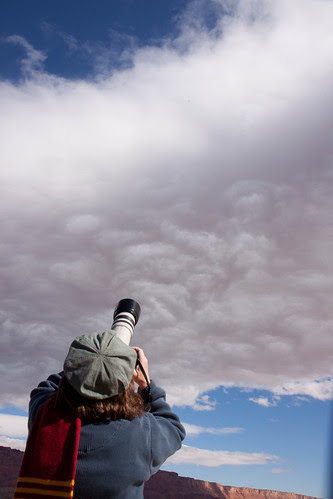 After the birds drifted off beyond the horizon, we headed to the Vermilion Cliffs to see the release site. 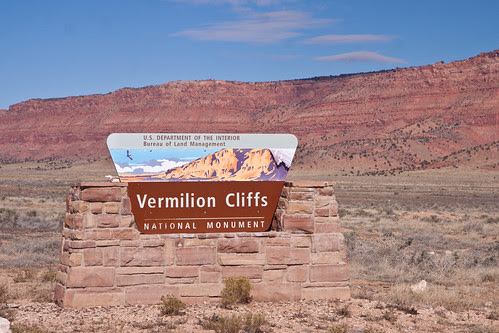 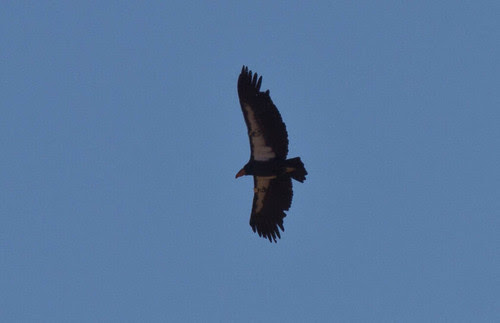 The distances were too great to get detailed photos, but some of my pictures did allow me to read wing tags that identify individual birds. (You can find out the history of tagged condors in Arizona on this page of the Peregrine Fund website.) 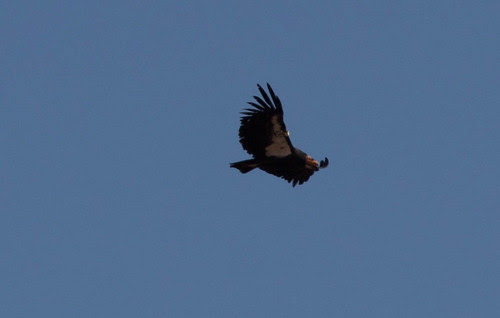 Usually I’m most excited about seeing new birds up close and personal. But I think the most thrilling thing about seeing these condors was that they were doing exactly what I’ve dreamed for so long about them doing—flying high in the sky, far above us mere humans. Seeing these eight California Condors was far and away the best birthday gift of my entire life. And the November weather didn’t turn horrible until what was supposed to be the very last day, as we crossed back into Minnesota. We got stuck in Faribault overnight, but the trip was worth it. 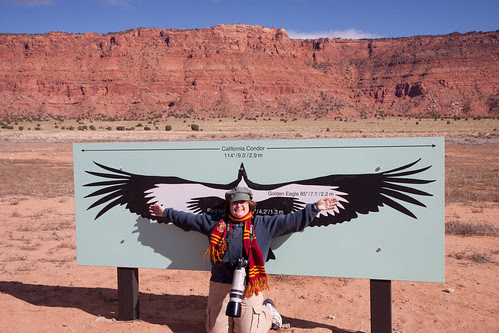 (Added after posting) I read in the news today that a man's body was found by birdwatchers observing condors at the Navajo Bridge on Thursday. This is exactly where we found the third group on Saturday, the 12th. It will be interesting to find out how long he'd been dead. The story is here.
Laura Erickson at 12:40 PM
Share
‹
›
Home
View web version