What to do about feral cats: More questions than answers 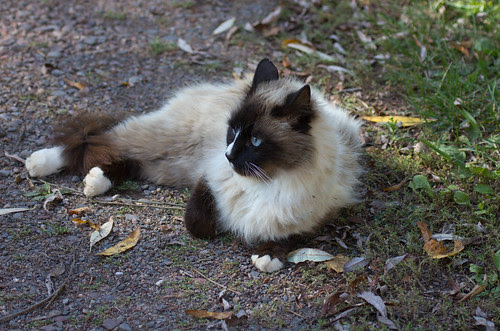 (Transcripts of today's and tomorrow's For the Birds)
Three weeks ago, when Russ and I were in Port Wing, Wisconsin, visiting his mom, we found an emaciated cat lurking around where her juncos, doves, and migratory sparrows hide out. She was a blue-eyed beauty, a Himalayan, looking like a longhaired Siamese but lacking the squashed-in face that some people breed Himalayans to have. She had a husky, cool meow that reminded me of Jean Arthur in Mr. Smith Goes to Washington, so I decided to call her Clarissa. Russ’s mom’s nearest neighbor is over a quarter mile away, but I drove over there to see if they’d lost a cat, and put up a notice in The Store, leaving my phone number so people could contact me, and then we drove home with her.

I contacted the Bayfield County sheriff’s office and several veterinarians and humane societies, to see if anyone had reported a lost cat. I had to keep her quarantined from my own cats and Photon, and first thing the next morning, I called my vet and asked if they could squeeze us in so she could have the once over. The first thing they discovered was that she was a neutered male, so suddenly Clarissa turned into Clarence. He had both roundworms and tapeworms. They ran several tests, and learned that he was FIV positive. This disease, akin to HIV in humans, suppresses the immune system. It’s only communicable to cats, passing through the saliva, so can be given to cats who share dishes or who bite or lick one another. Our family is at our limit in the number of pets we can properly deal with anyway, and now it was definite that there was no way we could keep Clarence. But what could we do? I posted on facebook and my blog, and called various humane organizations, but most places euthanize cats with FIV because there’s no cure and they don’t want the disease to spread to other cats. 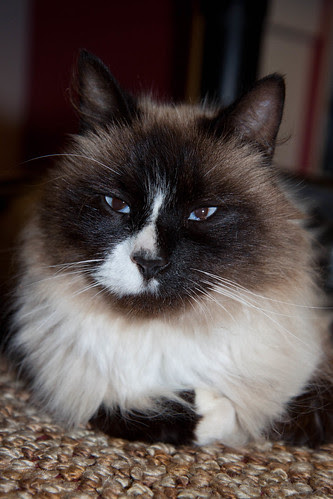 Two and a half weeks went by, I was getting very nervous about finding him a home, and it wasn’t easy dealing with him at home—when I was around, I could have him up in my home office, but even though he didn’t seem the least bit interested in Archimedes, the poor little owl was petrified of him, so when I wasn’t in the room, I had to keep Clarence in our basement garage. 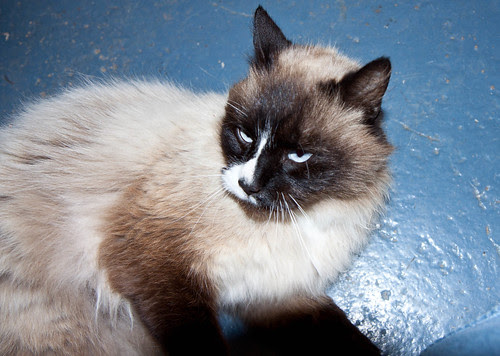 It was all very stressful, but at last a miracle happened. One of my birding friends on facebook lives in Tucson, and friends of hers south of Madison, Wisconsin, had recently lost a cat. One thing led to another, and this past weekend I drove Clarence to his new home.

Rescuing this cat, which also saved all the birds he otherwise would have eaten, cost about $300 in vet bills, plus the gas for driving 700 miles back and forth. It would have been far cheaper to have him euthanized right off the bat, and maybe more sensible after I found out he was FIV+. I of course also had the option of just leaving him in Port Wing, ignoring his suffering and all the lost birds, but that runs against something deep in my soul. I don’t know what the wisest way to deal with stray and feral cats is, but leaving them outdoors to spread parasites and diseases and kill wildlife is not the solution. People down the road from my mother-in-law allow their cats outside, and Clarence got into a few fights with them. They may have given him FIV, or he may have transmitted it to them. In addition to the danger feral and stray cats cause to people by spreading toxoplasmosis in their droppings, and the risks of spreading disease and parasites to other cats, current estimates put the number of birds killed by cats in the US at more than a billion each year.

I don’t know what the best solution is, but tomorrow I’ll talk about one misguided attempt to deal with feral cats in Washington, DC that may land a wildlife biologist in prison. 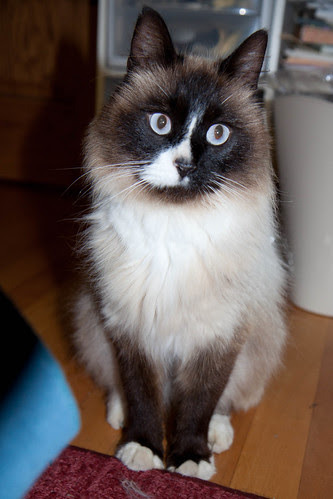 *****
Feral and stray cats, and pet cats allowed to spend time outdoors, kill an estimated billion birds a year in the US. People supporting Trap-Neuter-Release programs for feral cats close their eyes to the unimaginable suffering of the small mammals and birds toyed with and killed by these cats. They feel a misguided sense of virtuousness supporting feral colonies, reminding me of the people who used to bring me birds injured by their cats when I was a rehabber. I spent thousands of dollars of my own money and thousands of heartbreaking hours taking care of these birds, and only one of them survived in my decades of rehabbing. A single cat bite crushes bones and punctures skin and muscle, leading to complex and devastating internal injuries and infections. People bringing me these birds drove away feeling virtuous, not thinking at all about the suffering the bird was still undergoing, nor about the suffering of me and my children struggling to keep these birds alive and watching them die. Out of sight, out of mind. 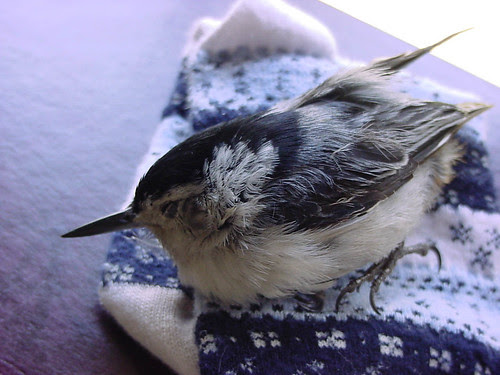 The truth is that there is no such thing as a properly managed feral cat colony. People who think of themselves as humane leave cats out there to kill huge numbers of birds and small mammals and to spread diseases and parasites to other cats before they themselves succumb to disease, frostbite, injuries, or predation. When these cats have access to garden beds or children’s sandboxes, they spread toxoplasmosis to humans. Euthanizing them is far more humane to far more creatures than supporting them in this feral condition. 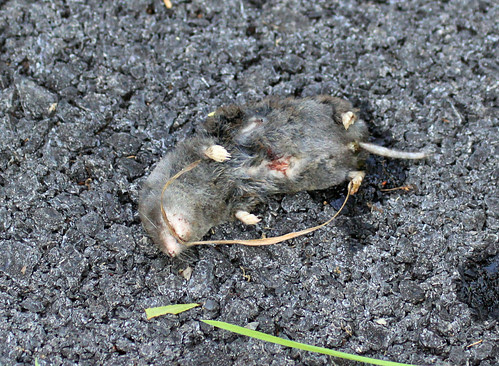 Unfortunately, in cities like Washington, DC with active trap-neuter-release programs to support feral cat colonies, there is little people can do to protect birds from them, and these cat populations can be far, far larger than any natural predator population can be. When people feed them, they simply keep them alive longer, yet subsidizing them with food has never been shown to reduce the number of birds they kill. 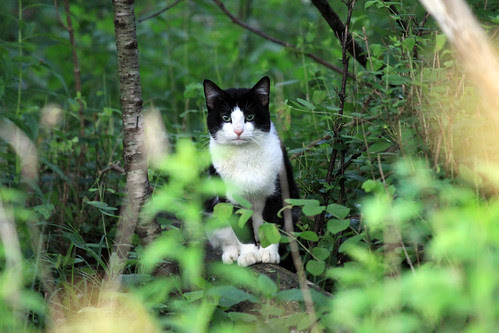 A wildlife biologist with the Smithsonian Migratory Bird Program was at her wits end dealing with the many feral cats fed at an apartment complex next to a park where birds were concentrated during migration. She was videotaped putting poison into feeding dishes at nighttime, and convicted on November 1 of attempted animal cruelty. The maximum penalty is 180 days in jail and a $1000 fine.

As much as I decry feral cat colonies, I know it would be impossible for me to poison cats—not only would they suffer, but any scavengers that ate them would also sicken or die. But I’m sympathetic to the desperation of this biologist, who documented and understood first-hand the damage that cats do to migratory birds. I was also sympathetic to the man in Texas who was convicted of shooting feral cats that had been feeding on endangered plovers. Really, what can we do when so-called "humane" societies foist these subsidized, domesticated killers on wildlife rather than take responsibility for finding a truly humane solution for them? 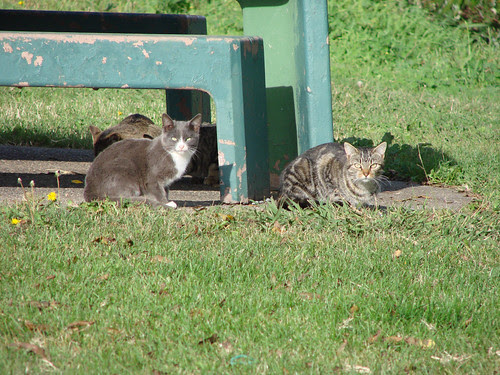 Sites on the internet promoting feral cat colonies use photos of piles of dead cats that have been euthanized to elicit sympathy to their cause. But where are the photos of the carnage feral cats cause? Why is a quick and humane death for one cat more tragic than the suffering and death of the hundreds of birds that that cat would have killed, along with the diseases and parasites it would have carried to other pets and human beings? The Humane Society of the United States claims to “work to reduce suffering and improve the lives of all animals.” Subsidized feral cat colonies pit one domesticated species against billions of individual animals of hundreds of species. Cats have led to literal extinctions on some islands, have decimated local populations of many vulnerable species, and kill hundreds of thousands or even a billion birds a year in the US. Poisoning or shooting these animals in frustration may not be the best response, but the Humane Society has an obligation to keep feral cats separated entirely from wild birds, or they’re not being humane at all. 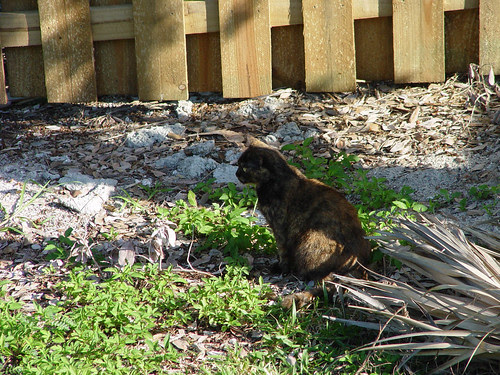