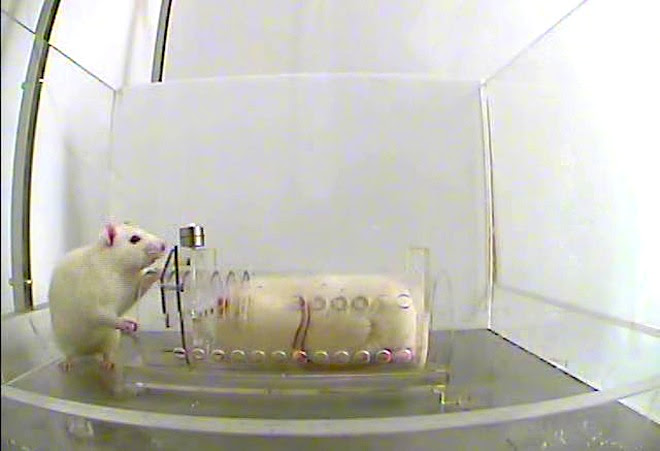 Wednesday, the journal Science published a fascinating study by researchers from the University of Chicago demonstrating that rats show empathy toward other rats. In their experiments, Peggy Mason, Jean Decety, and Inbal Ben-Ami Bartal put rats inside an enclosure, trapping some of them in a tube trap which could only be opened from the outside. As soon as a free rat figured out the mechanism, it released the trapped ones. And after it had figured out how to open the trap, every time it saw trapped rats, it released them. These rats never opened the trap unless a real, live rat was trapped inside. They couldn’t be tricked by stuffed ones. This was represented as the first documented scientific experiment proving that rats display a kind of empathy toward other rats.

The results of this experiment didn’t surprise me. There are many documented cases of jays and crows providing food for injured or sick birds from their neighborhood flock. Some scientists go through all kinds of intellectual contortions to avoid attributing emotions to animals, explaining behaviors that appear empathetic are merely programmed behaviors that help ensure that the animal’s genes survive, sometimes because local populations include related animals, and also because if this behavior is a found in a population, each animal that helps another can expect reciprocal kindness. But we could explain human empathy exactly the same way. It is certainly unscientific to attribute human characteristics to birds, but it’s equally unscientific to claim that a human characteristic cannot be found in any animals. Little by little, we tease out scientific evidence that we share more than biochemistry and a whole lot of our DNA with other animals. One day, I suspect that people will look back on our belief that humans are entirely apart from other animals with the same bemusement that we look back on people for believing the earth is at the center of the universe. 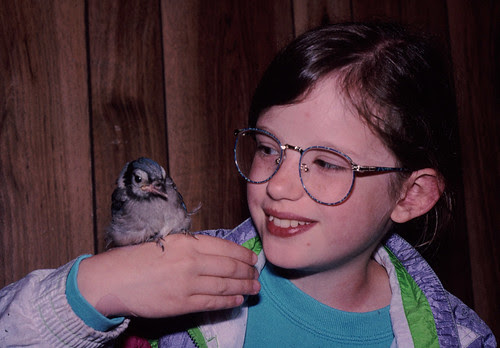 I used to have a licensed education Blue Jay named Sneakers. For a while when I was rehabbing, I also had a jay named BJ. The two of them lived in adjacent cages, and were very responsive to one another. I never did a genetic test to determine the sex of either bird, and neither of them showed any courtship or nesting behaviors, but they seemed to be best of friends. One day when I went into the room where I kept them, I found that Sneakers had managed to break out of her cage. BJ’s cage door was securely fastened, but Sneakers was stuffing mealworms through the bars straight into BJ’s mouth. I presume Sneakers had eaten a bunch herself first, but I was struck by her generous impulse to feed her buddy. Sneakers was also very devoted to me, and learned to say “hi,” and “c’mon” in my voice. The first time she talked that we know of, I’d been out of town for a couple of days, and Russ heard her say “hi,” and thought I was home early. Once in a while she’d talk in front of little kids, and sometimes she talked when it was just the two of us, but she did most of her talking when I wasn’t home. I started to suspect she was imitating my voice when she missed me. If she couldn’t see me, she could at least hear my voice. BJ wasn’t the least bit bonded to me, and never said a word. That is, not until Sneakers died. Suddenly, out of the clear blue sky, BJ started saying “Hi,” and “C’mon,” sounding exactly like Sneakers. I think it was how BJ could hear Sneaker’s voice. 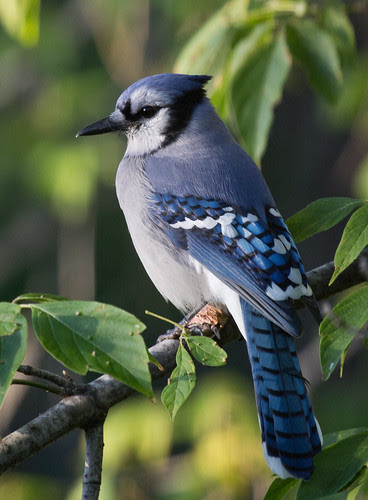 I’m not surprised that scientists are detecting empathy in animals, and based on Sneakers and BJ, and on various dogs and cats I’ve had in my life, I think grief is another emotion we share with our fellow creatures. Considering how poorly we communicate with and demonstrate empathy toward our own species, I don’t know how we’ll ever learn to communicate with animals, or come to any real understanding of our fellow travelers on this planet. But little by little we’re learning.