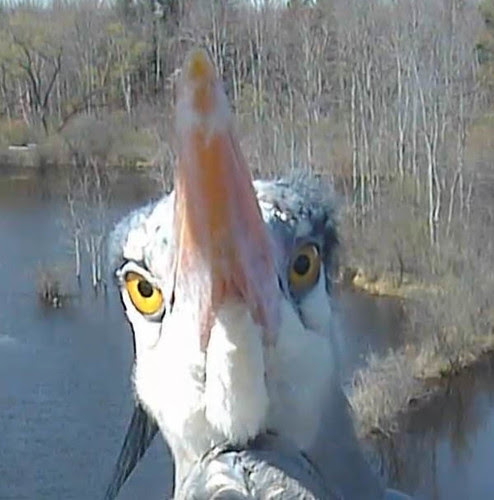 In my lifetime, I’ve been able to watch a lot of birds, and do a lot of writing and engaging with people, and have enjoyed almost every moment of it all. But right now I’m having more fun and a richer experience, both with birds and people, than I’ve ever enjoyed before, thanks to a pair of Great Blue Herons and the Cornell Lab of Ornithology.

In 2009, when I was working full time as science editor at the Lab, a pair of Great Blue Herons started building a nest in a big dead white oak in the middle of the pond right outside the Johnson Center for Biodiversity, where I worked, in Sapsucker Woods. I’d never seen that whole process, and was transfixed--I don’t think I’ve ever spent so many nights up late working because I’d spent so many minutes and hours of actual working time over by the window taking photos. I pretty much documented the herons’ activities every day, and it was thrilling watching them successfully rear four chicks. 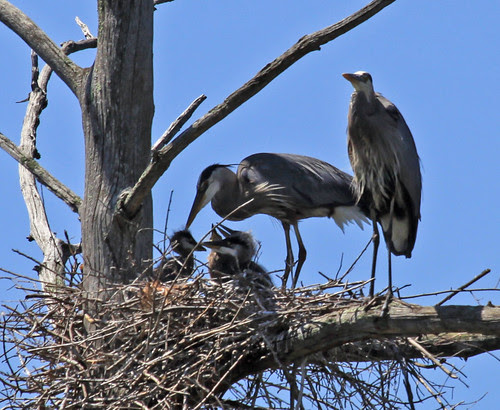 That same male has returned to the nest each year after that and the pair has raised four chicks each time, but I’ve not been around to watch. He’s not banded, but we know it’s him because he’s missing his right hallux--that is, the rear-facing toe on his right foot. 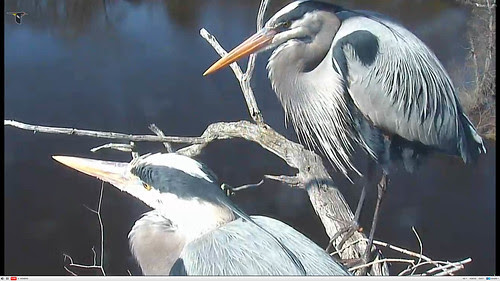 We have no way of being certain about his mate, because she has no unique anomalies, but we’re virtually certain she’s the same one as last year because as soon as she returned this spring, the two of them set up housekeeping with very little preliminary courtship--they were apparently already bonded from last year. I’m in Duluth this year, but I feel like I’m right there, because at the beginning of March, the Cornell Lab of Ornithology worked with a local arborist in Ithaca to climb the tree and get two video cameras in place. One of the cameras, with a pretty wide angle, is set on the tree trunk to catch all the close up action right where the eggs are--when an adult is near the eggs, you can see his or her whole body. 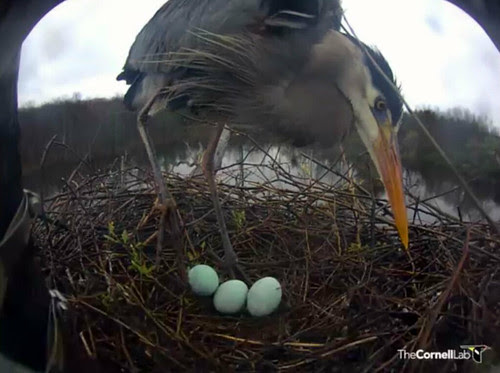 That camera also shows one of the branches where the adults often perch. 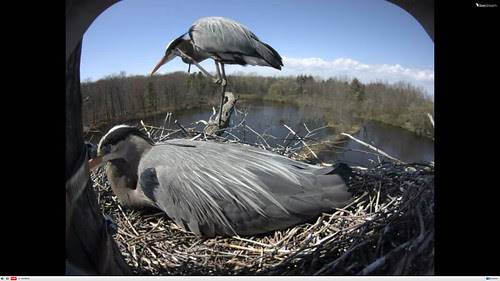 The other camera is above, and that one can be controlled from inside the Lab. A couple of staff members turn it this way and that, able to see what’s happening around the pond from inside. They’ve followed the parents as they’ve flown to trees to gather sticks, 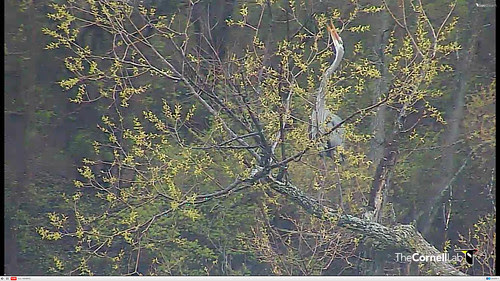 zoomed in on other birds in the pond, and given us amazing close-ups of the herons. It was pouring rain on Sunday, and we got close-up views of the raindrops on the incubating parents’ feathers--how they weren’t penetrating, how they rolled off--it was amazing. 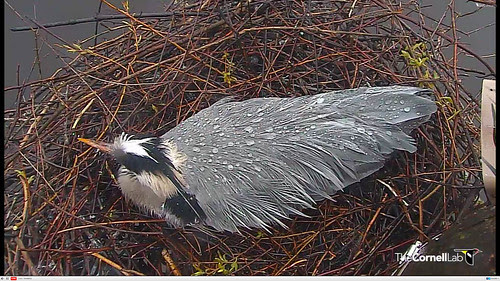 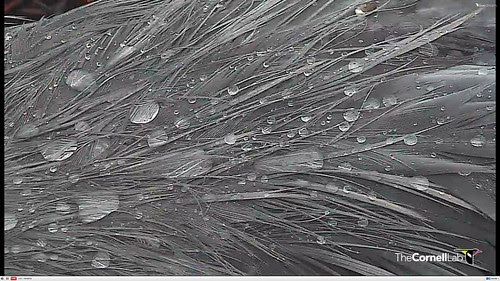 Even more amazing has been actually watching the female laying her first three eggs, 48 hours apart. We can’t see the egg come out, because there’s obviously no camera underneath her, but we’ve seen how her body contorts and thrusts, 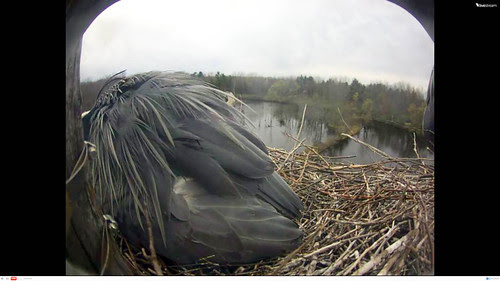 how she gulps or pants, and then watched her stand up and lo and behold, there’s a new egg! 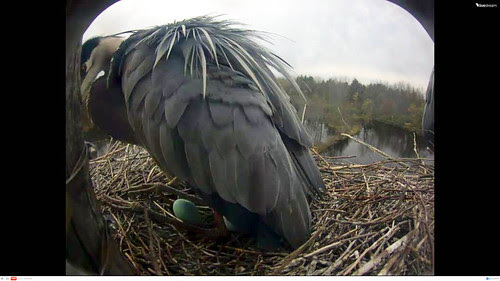 Staff people have archived videos for each egg, along with a lot of other clips of fascinating behaviors.

The Lab was planning on setting up the cameras to livestream the whole nesting process starting in mid-April, but with the early spring, the herons jumped the gun. So the cam system is live, with a chat running the whole while, with me, some other Cornell staff members, and volunteers moderating and answering questions. It’s really worth seeing. Just point your browser to www.allaboutbirds.org/cornellherons and join the fun! 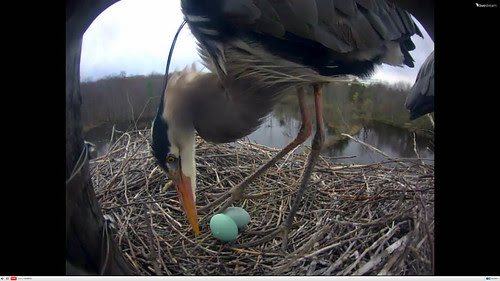