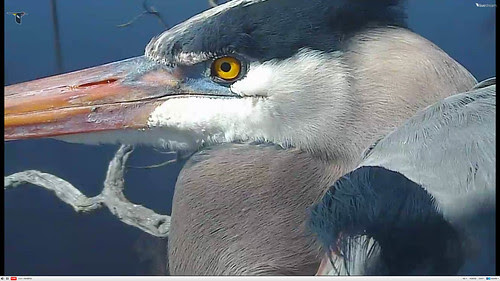 One of the fascinating things about the Cornell Lab of Ornithology’s heron nest chat room has been seeing people’s tendency to look at individuals--human and animal--and jump to conclusions about what is going on in their minds and hearts. This is more focused than simple anthropomorphism. Just as we identify with characters in movies and on TV, and with people we encounter in real life, we can’t help but identify with these birds as we watch their every move up close and personal, and we can’t help but assume that we share some of their motivations.

When the male heron takes his turn incubating the eggs, some people comment on what a great father he is while others attribute his dutiful ways to being a henpecked husband. The male brings lots of sticks to the nest, often handing them off to the female but sometimes arranging them himself. Both of the birds seem to stand up two or three times an hour while on incubating duty. While up, they turn the eggs and rearrange sticks, paying particular attention to the tiny twigs arranged on the floor of the nest where the eggs are, apparently ensuring that the twigs lie flat so no sharp ends can puncture the eggs. As far as I can tell, the male and female put in comparable time in nest repair, but some people pay more attention to one or the other. For example, some people make a point about how the female is fixing up the place after dad messed it up, while others are either impressed with how fastidious Dad is, or amused by how fussy he is. During incubation, while the female is replenishing lost nutrients after egg production, the male spends longer periods incubating than she does.

When he’s off the nest for a few hours, no one comments about his absence, but when the female is gone, there are dozens of comments about her shopping, hanging out with the girls, or even eying the male next door. A great many people say what a “great dad” the male is, with few mentioning what a great mom the female is. When one bird returns and they make contact calls, some people comment on the warm and loving greeting while others think the one on the nest is scolding the other for its absence. These comments go beyond anthropomorphism to individually personalizing these birds to fit people’s own personal histories or the human stereotypes they ascribe to.

There have been some sad and scary moments at the nest. A Great Horned Owl on three separate nights attacked the female when she was incubating. There is no way the male could have helped the situation by flying in--Great Blue Herons don’t fly as fast or maneuver in the air as well as owls do, and their spear-like bill is most effective while the bird is firmly braced on the ground, so there wasn’t much he could do from afar. I was surprised by how many people commented about his “cowardice.” I suspect this owl was a nesting adult female--they’re larger and more aggressive than males, and to attack an adult heron would seem to require that she had young to feed. I am extremely fond of the herons and did not want the owl to succeed, but found it sad and off-putting to read comments about the owl being vicious and even evil.

One of the eggs has become dented and slightly cracked, and it’s fascinating to hear people say one of the birds is clearly sad or distressed or even crying.

Some people so desperately avoid being accused of anthropomorphism that they go overboard the other way. It’s unscientific to ascribe human emotions to birds, but it’s equally unscientific to deny that birds feel those emotions--we have no way of measuring emotions in other humans, much less in other species, so without any concrete way of defining and measuring, discussions of bird emotions are philosophical, not scientific.

Anyway, it’s been great fun for me to observe both the herons I’m so attached to and the other people who for various individual reasons are responding to the herons in various, individual, and extremely human ways. Birds may be my first love, but we humans are oddly fascinating in our own right.
Laura Erickson at 7:38 AM
Share