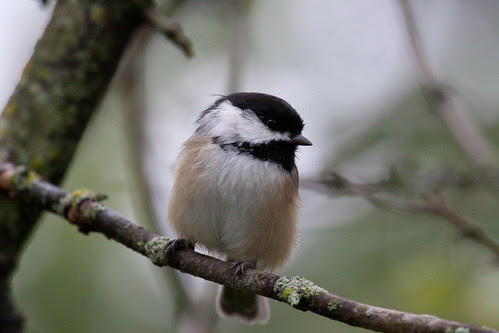 Every now and then I read a news story that happened quite a while before but I missed it first time around. It turns out that way back in 2007, scientists made a cool discovery about chickadees that I don’t know how I missed. A study from the University of Colorado at Boulder published in Ecology found that chickadees, nuthatches, and warblers foraging in forests can spur the growth of pine trees by as much as one third. These little birds remove so many beetles, caterpillars, ants, and aphids from tree branches that the vigor of the trees increases measurable. Kailen Mooney said that “From the standpoint of the trees, it appears that the old adage, ‘the enemy of my enemy is my friend’ holds true.”

The study was conducted by using mesh to exclude birds from some ponderosa pine limbs for 3 years. The results showed that branches on 42 trees excluding birds had 18 percent less foliage and 34 percent less wood growth by the end of the study.

Anyone who has even a rudimentary understanding of the interconnectedness of life, one of the basic underpinnings of ecology, probably could have figured this out, but it’s good to have actual figures from a peer-reviewed study to back it up.

Another entry in the category of news that was obvious to anyone who pays attention to chickadees and nuthatches but is still really cool to have verified by a scientific study is a doctoral project at the University of Washington. Christopher Templeton is the scientist who showed in 2005 that chickadees have two different alarm calls. The first is a very high-pitched seee note to indicate a flying bird of prey. This is quite similar to the sound robins also make for the same reason, and whenever I’ve ever heard either species make it, all the other birds have seemed to disappear or freeze, so I’ve always thought other species were reacting to the call.

For lower-level and perched predators, chickadees use the number and intensity of dees in their chickadee dee dee call to indicate the level of threat the bird perceives. In the West, Northern Pygmy-Owls represent a huge threat to small birds, and when chickadees mob one, they use a lot of extra dee notes. A Great Horned Owl represents a threat, too, but not nearly as much to little birds, who can easily out-maneuver one of these huge predators, so they use fewer dee notes.
This winter I myself watched a flock of chickadees mobbing a tethered Great Horned Owl at Houston County’s annual Owl Festival, and they were clearly not all that alarmed, but in past years when I’ve seen them mobbing Saw-whet or Boreal Owls, they go bonkers. It’s always struck me that if I can understand so clearly what a chickadee is saying, surely the birds that spend their lives associating with chickadee flocks most certainly must, and sure enough, Christopher Templeton found, using recordings of chickadee alarm calls reproduced on speakers, that Red-breasted Nuthatches responded with mobbing behaviors, growing increasingly agitated by higher-level chickadee alarm calls. He says that this appears to be learned behavior because the nuthatches’ own mobbing calls are quite different from chickadee calls.
So researchers establish beyond a shadow of a doubt that chickadees are important for forests and also help make other birds aware of danger. It’s always cool when our gut feelings about things that seem like no-brainers are borne up with science.
Article from 2007 Science Daily
Laura Erickson at 11:58 PM
Share