I was in elementary school when The Andy Griffith Show came to TV. I don’t think I’ve ever watched reruns on cable, and I’m not sure how accurately I remember the program, but learning of Andy Griffith’s death, a flood of memories came back to me about one particular program. Opie got a new slingshot and killed a bird—I think a robin—and it turned out that it was a female with hungry nestlings. Andy gave Opie a talking to, and Opie felt sad and guilty and tried to do something to save the baby birds. Beyond that, my memories are murky, but I do remember that it reinforced my belief that Andy Taylor was a perfect role model, and I remember sensing a great truth about how even small things we do can have horrible repercussions we hadn’t anticipated. And even the most well meaning, adorable little boy bears an obligation as a human being to repair damage caused by his actions.

One of the amusing constants of the show was that Deputy Barney Fife wasn’t allowed to have any bullets in the gun he carried everywhere. There was never any discussion of Barney’s constitutional right to bear arms—the point had nothing to do with rights and everything to do with responsibilities. Andy didn’t trust Barney’s wisdom and restraint when it came to carrying a loaded weapon, and as far as I know, the NRA never made an issue of it.

Now we’ve evolved into a society in which people—not small boys like Opie but adults and older teenagers—shoot endangered birds and get off with mere hand slaps. In the past 2 years, 12 critically endangered Whooping Cranes have been killed in different places by different people, some of them licensed hunters. One was shot in a South Dakota cornfield in April on its migration to Canada—that bird’s mate is unable to reproduce this year at all, so we’ve lost more than just the one bird. This past January, two men killed a whooping crane in Indiana using a high-powered rifle guided by a spotlight. Last October, two of the ten Whooping Cranes from a brand new reintroduction project in Louisiana were shot in separate instances. 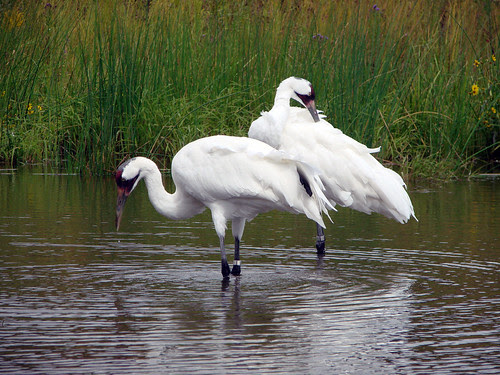 Bad as all these were, the saddest case to me was when the first female crane in a hundred years to successfully rear a chick in Wisconsin was killed on migration in Indiana in 2009. The two shooters, one a 17-year old, the other 18, were fined, and I am not making this up, $1, and they were not charged with violating the Endangered Species Act. A spokesman in the US Attorney’s Office for southern Indiana said it is not standard practice for federal prosecutors to decline to charge juveniles in wildlife crimes, but for some reason they chose not to in this case.

Andy Taylor was always gentle and never overreacted about anything, but I suspect he’d have expected more of Opie or any lawbreaker in town than a single dollar fine. Would he have taken away their bullets for a good long time? Would he have made them feel guilty about the surviving Whooping Crane who lost his life-long mate? Not much could be done there, but maybe Andy would have expected them to help the people who’ve put their hearts and souls and time into restoring this critically endangered species. Andy Taylor’s sweetness and wisdom are fictional, but one function of fiction is to show us possibilities for how we can approach real life. It’s telling that there are no Andy Taylors in popular media today, and apparently there aren’t any people on the judicial bench guided by internal scripts anything like the ones Andy Griffith got to read [which the actor actually oversaw]. I know I’m nostalgic for a time and place that never really were, but I sure wish that the real world of 2012 had a few better writers.

(Thanks to google and youtube, I got to temporarily see much of an episode I really hadn't seen since I was a kid! These birds weren't robins--they started out as House Sparrows in another kind of nest, but miraculously and magically evolved into canaries in a later scene, and then turned into what I think were canaries with House Sparrow voice overs. It would have been perfectly legal for Opie to raise baby House Sparrows then and now, but most birds are protected by law and now those laws are enforced more than they were in the Sixties.)
Laura Erickson at 12:40 AM
Share