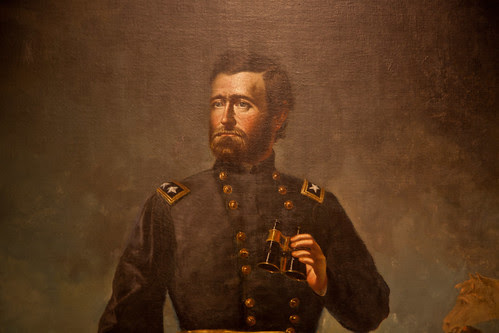 My favorite president, for all kinds of obscure reasons, is Ulysses S. Grant. His distinctions with regard to birding are fairly limited, but he was the president who sponsored two federally funded scientific discovery projects—the Polaris Expedition, America's first large scale attempt to reach the North Pole, and the Hayden Geological Survey into the Yellowstone, that led to the establishment of Yellowstone National Park. Indeed, on March 1, 1872, he was the president who signed the law establishing the Yellowstone region as a public park and setting a major conservation precedent. He deserves credit for being the president who thus established the National Park system, though few people know it.

I recently read Grant's Memoirs and, as I usually do, searched throughout them for any references to birds. But in the entire two-volume work, there was only one reference to birds (other than three references to Bird's Point, one idiom "nineteen miles as the bird would fly," and a single use of the phrase "killing two birds with one stone"). His only mention of wild birds was his account of his one and only lifetime hunting experience:

I had never been a sportsman in my life; had scarcely ever gone in search of game, and rarely seen any when looking for it. On this trip there was no minute of time while travelling between San Patricio and the settlements on the San Antonio River, from San Antonio to Austin, and again from the Colorado River back to San Patricio, when deer or antelope could not be seen in great numbers. Each officer carried a shot-gun, and every evening, after going into camp, some would go out and soon return with venison and wild turkeys enough for the entire camp. I, however, never went out, and had no occasion to fire my gun; except, being detained over a day at Goliad, Benjamin and I concluded to go down to the creek—which was fringed with timber, much of it the pecan—and bring back a few turkeys. We had scarcely reached the edge of the timber when I heard the flutter of wings overhead, and in an instant I saw two or three turkeys flying away. These were soon followed by more, then more, and more, until a flock of twenty or thirty had left from just over my head. All this time I stood watching the turkeys to see where they flew—with my gun on my shoulder, and never once thought of levelling it at the birds. When I had time to reflect upon the matter, I came to the conclusion that as a sportsman I was a failure, and went back to the house. Benjamin remained out, and got as many turkeys as he wanted to carry back.