The Last Hummingbird of Fall 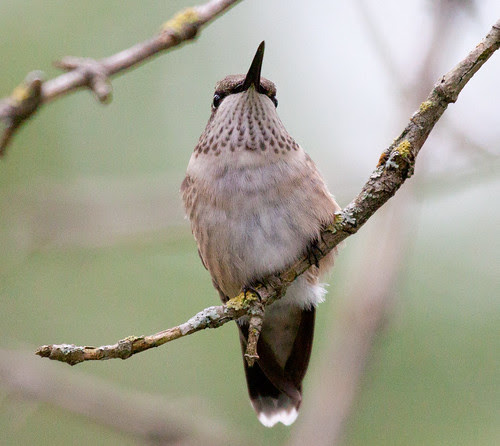 This Ruby-throated Hummingbird photographed at my feeder last September is probably a first-year male, based on his "five o'clock shadow."

Every September, I get inundated with questions about when we should take down hummingbird feeders. The vast majority of Ruby-throated Hummingbirds light out for the territory in August, and most of us in northern states notice our last ones on or before Labor Day. If you’re putting out hummingbird feeders for your own enjoyment of these tiny dynamos, take in your feeders when you stop seeing them. But unless you’re watching your feeder every minute of every daylight hour, you are almost certainly getting occasional visits from hummingbirds migrating through. Keeping feeders available can give these last ones, mostly young of the year, a quick supply of calories. A hummingbird feeder provides far more carbs per visit than individual flowers do, so a feeder allows migrants to spend more time traveling and less searching for food. 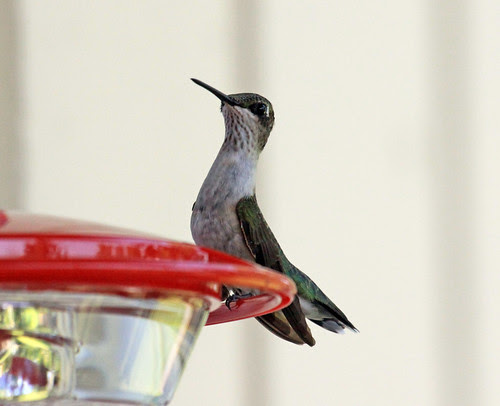 If you keep feeders up in fall, keep the sugar water fresh. It’s easy to forget to change the water every few days, but essential if you want to do more good than harm. Even before sugar water gets cloudy, it’s fermenting, which can cause liver damage. Fermentation goes faster in warmer temperatures, so we can change the water less frequently during cool fall weather than in summer heat, but need to keep the task on our radar.

In spring and summer, several feeders can accommodate these aggressively territorial birds with a minimum of squabbles. Because so few hummingbirds are present this late, it is less expensive and far easier to maintain just one or two feeders. It’s also wise to set fall feeders in the windows you spend the most time near. 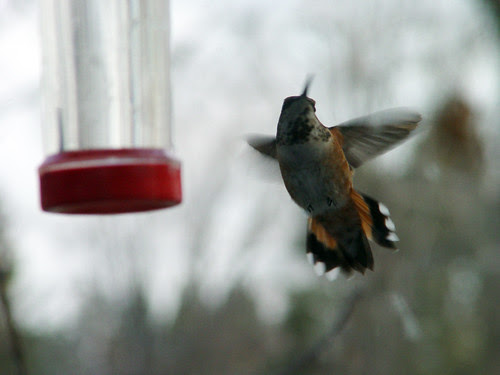 The likelihood of seeing any hummingbird in late fall is small, but you have a reasonable chance of seeing a real rarity. I’m only aware of four or five hummingbirds visiting my feeders over the years after September 15, but one of them was a rare visitor from the West who turned up on November 16, 2004 and remained until December 3. Her identity was under some dispute—she was most likely a Rufous Hummingbird, but without collecting a feather for DNA it was impossible to be certain. If a qualified hummingbird bander had been available to trap her in a standard hummingbird trap, I’d have been fine with taking measurements and macro photographs of her.

Unfortunately, the only banders available used mist nets, which are very stressful and dangerous for hummingbirds even when the banders specialize in handling them. To verify her species, they wanted to remove one tail feather, but birds immediately shunt resources to replacing plucked feathers, and that time of year when a minimum of protein was available, I just couldn’t justify putting her through any of that. So although I have plenty of photos of her and think of her as a Rufous Hummingbird, she’s listed as “Selasphorus sp.” in the Minnesota Ornithologists’ Union record books. 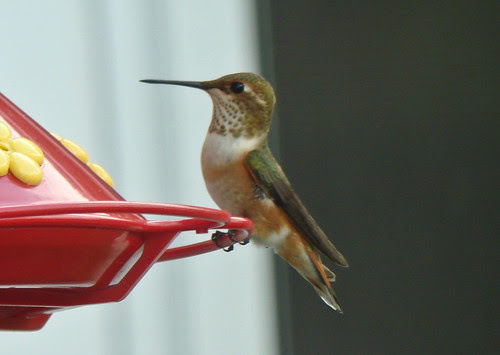 Wisconsin and Minnesota have both had amazing visits by out-of-range hummingbirds in fall, including such shocking species as a Green Violetear visiting a La Crosse feeder one October, an Anna’s Hummingbird in Grand Marais one November, and a Calliope Hummingbird in the Twin Cities one December.

Feeders did not lure these birds out of their normal ranges. It’s impossible to know how many out-of-range hummingbirds just quietly die with no one to notice. When my backyard Rufous Hummingbird took off at mid-morning on December 3rd, I was petrified that she wouldn’t encounter another friendly feeding station no matter what direction she took. Ever since she showed up, I’ve tried to keep at least one feeder available and fresh throughout October and November. Even if I never look at the window, and never know if any hummingbirds came, I feel good knowing if one does pass through, it won’t leave my yard hungry.
Laura Erickson at 2:49 PM
Share