Saturday, September 22, 2012, was an amazing day for watching migrating birds. We’d had measurable snow at the Duluth airport the night before, and strong northwest winds made perfect migration conditions for all kinds of birds. My yard was hopping with Swainson’s, Gray-cheeked, and Hermit Thrushes, thanks especially to a bumper crop of berries on the Virginia creepers growing along my back fence. Those grew in all by themselves, presumably via bird poop. It’s fun to see how birds plant seeds for their favorite berries wherever they stop for a while. Or is it that the plants entice hungry birds to their berries with the expectation that when the birds take off they’ll plant their seeds via the birds’ droppings? Whether the cleverness belongs to the birds or the plants, or is a magical combination of both, depends on one’s point of view. Me, I can’t help but give all the credit to the birds.

My Virginia creeper and several dogwood plants in the back of my yard provide an abundance of berries and insects, and I spread sunflower and white millet on the ground near my raspberries and under some feeders, and so in addition to the thrushes my yard has been hopping with over 200 White-throated Sparrows and a smattering of Fox and Harris’s Sparrows and juncos. 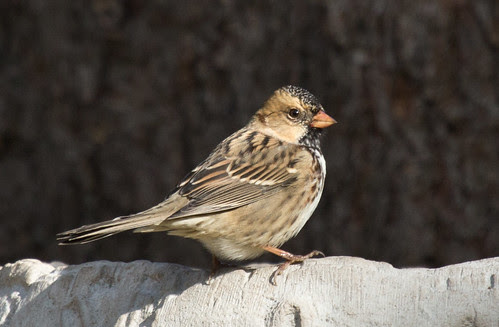 For better and for worse, I’m right under Hawk Ridge. As thrilling as it is to see all those hawks passing through, it’s tricky making our windows safe so when an approaching hawk sends the little birds off in a panic, they don’t crash into windows. So far this fall we’ve only had one window strike—a Gray-cheeked Thrush flew into our living room window Saturday morning while Russ was right there to witness it. He went out and got the poor thing, who was lying upside down, a position that makes recovery from a concussion very difficult. Russ put it into a dark box. When I arrived on the scene, the thrush was still dazed, but both eyes were working and neither pupil was dilated or fixed, and within ten minutes it was perky and ready to fly off again, after giving me a brief photo op. 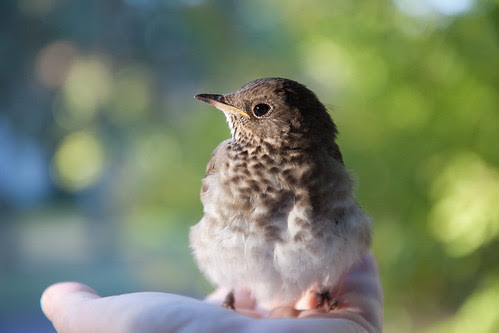 Migration is risky business for these birds of true northern wilderness. My thrush was a first year bird who hatched, in June or early July, up in northernmost Canada. From here on out until it reaches its destination in South America, it’s going to be running a collision course, with major urban centers all the way down. Even flying over the ocean isn’t safe. I’ve talked to many people who were on Caribbean cruises during horrible migration events when dozens or hundreds of birds crashed into the lights and cabin windows of these boats—these usually take place during foggy weather when the birds can’t navigate properly.

But enough of the birds survive the journey down and back that we still have plenty of Gray-cheeked Thrushes. And vulnerable as all these birds are, we can’t help but be thrilled when we see the sheer quantity of migrants. Karl Bardon and other official counters at Hawk Ridge and a spot on the Lester River counted 730 White-throated Sparrows on Friday, and in just an hour and a half on Saturday morning, Peder Svingen counted an amazing 1,035 White-throats along a 2.5 mile stretch of East Superior Street between highway 61 and McQuade Road. The sparrows and thrushes milling about in my yard were eye-catching, but what seemed to catch the attention of a lot of people walking on the path along my backyard were the Blue Jay flocks I had all day. So much activity is such a thrilling way to end a season. We’ll have at least a few more great days in the weeks ahead, before migration dwindles and winter sets in. But I gave no thoughts to the cold days ahead—how could I think of anything other than the amazing spectacle of migration on a day such as this?
Laura Erickson at 1:57 PM
Share