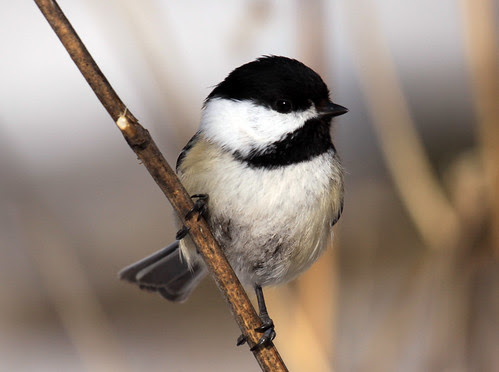 Ever since I started buying mealworms to feed baby songbirds and injured insectivores when I was rehabbing, I’ve been in the habit of offering some to my neighborhood chickadees, who take them right out of my hand. Of all wild birds, chickadees are the ones who most readily bridge the chasm between humans and birds. 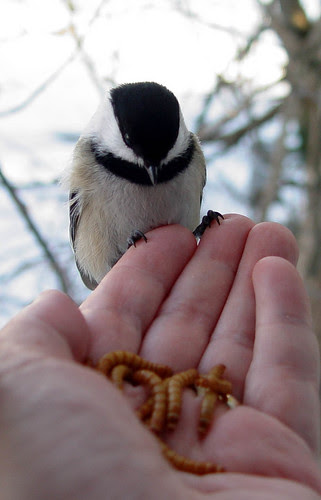 It’s not that chickadees are stupider or more trusting or less genuinely wild than other species, or that they’re compliant or wimpy or even necessarily friendly. Even after I’ve been feeding an individual chickadee for weeks or months or years, it would never allow me to grab it. Chickadees are readily tricked into being trapped in mist nets or special chickadee cage traps, but any bird bander knows that when a chickadee is caught, it goes down fighting, determined and clever about inflicting pain. Many birds are put into a dazed condition when a bander holds them on their backs, and some get into such a panic by being held at all that they become utterly defenseless. Some Blue Jays seem actually to swoon in the hand. 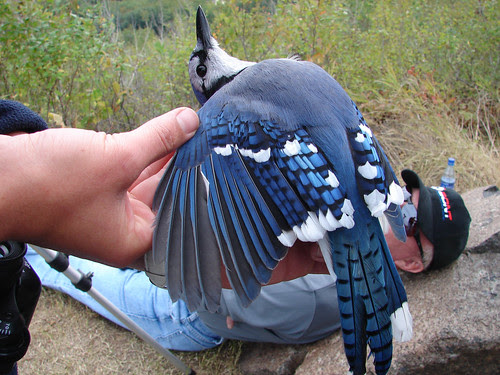 Chickadees have far less strength and power than corvids, yet from any position they bite, peck, and hammer their bill under fingernails and into cuticles and knuckles, often drawing blood. A 150-pound bird bander weighs more than 7,000 times the weight of a chickadee, but like Ahab stabbing the White Whale over and over to his dying breath, a chickadee will rage, rage against the dying of the light, and not go gentle into that good night. 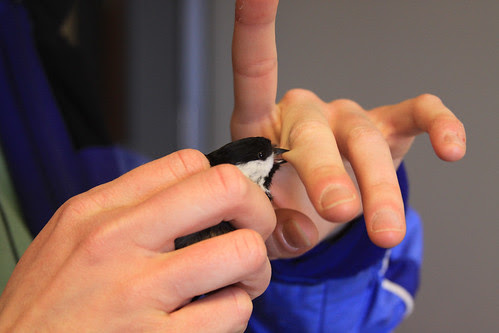 So it seems paradoxical that chickadees are the birds that most readily come of their own free will to our hands. I think the reason lies in their intelligence and unique ability to particularize every single feature of their environment. Just as they recognize each other as individuals, they recognize specific trees and branches, and remember which are or will be perfect for constructing roost and nest cavities. They remember each tiny crevice where they’ve hidden food, returning precisely to these caches when they need. Of all the windows in all the houses in my neighborhood, there is only one at which chickadees gather and look inside and even tap on the glass, hoping to attract one particular person’s attention. They don’t approach most people at all, but when I’m outside, they recognize my face and voice, often gathering around me as if asking, “Where’s the food?”
These chickadees are fundamentally wild and free. If I ever once breached the trust of a chickadee by trying to grab it, it would easily get away, its reaction time and quick movements making a mockery of mine. Long before my clumsy hands could close in on it, it would have flown off, and it would take weeks or months for me to regain its trust, if ever.

I can’t help but wonder what my chickadees think of me. They look into my face and eyes a lot. Do they recognize me as a living, possibly sentient fellow creature or a mealworm-dispensing robot? Do they think I’m kind and benevolent, or rather stupid and easily taken advantage of? Do they take pride in having tamed and trained me? Am I considered a friend, a well-trained pet, or a peculiarly unpredictable source of valuable food? It’s fun to speculate. But my human intelligence, limited as it is by my species’ very nature, makes communication impossible, so I’ll never know for sure. 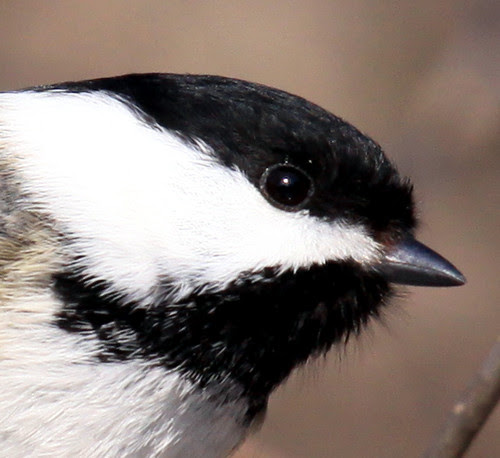