Reviewing the new National Geographic app along with Sibley and Peterson

This spring I got an iPad, and have tested a lot of birding apps that I spent my own money on. One of the first ones I got was NationalGeographic’s “Handheld Birds,” which was serviceable, but not all that great. But last week my iPad automatically updated it, and all I can say is WOW! The new version, now called National Geographic Birds: Field Guide to North America, is simply amazing, setting a whole new standard for birding apps. 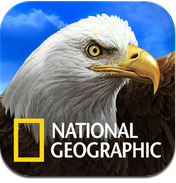 The new version includes all 995 species included in the new 6th Edition of the National Geographic field guide along with all the art and information about each from the new field guide and a variety of sound recordings from the Cornell Lab of Ornithology for each, and tips on what to listen for. As in the newest paper edition of the field guide, the artwork has great identification pointers, and when you tap the screen, you can toggle those pointers on and off. 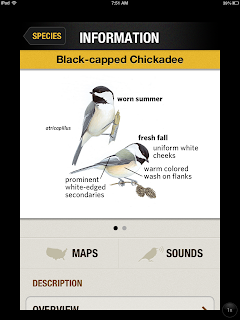 (You can scroll to the next screen, which includes darkest and lightest subspecies, along with screens giving lots of other information. Moving two fingertips closer or further apart enlarges the drawings.) 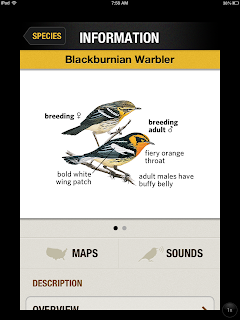 (You can scroll to the next screen, which includes fall adult male and immature female, along with screens giving lots of other information. Moving two fingertips closer or further apart enlarges the drawings.)

You can limit your choices to lists of birds that you make yourself, or to lists put together by National Geographic. These include lists of birds likely to be found in certain important birding destinations, such as the Rio Grande Valley, Madera Canyon, and Churchill, and lists of endangered species, the most abundant birds, backyard birds, and the birds most wanted by birders.

The app also includes a lot of extras. In addition to the sounds for each species, it has some very high quality close-up videos. There are only 16, but they’re extremely well selected to show secretive birds, including Ruffed Grouse, American Bittern, Sora, American Woodcock, Winter Wren, Hermit Thrush, and Ovenbird, all in the act of drumming, singing, or calling.

Also included are a lot of authoritative tips for new and experienced birders in 16 articles about birding and 10 quizzes that test you on bird recognition by appearance and sound, along with other important facts. And the app keeps track of your own personal sightings if you enter them in the built-in journal. 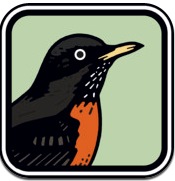 The Peterson Guide has an app, too, but that one was a disappointment to me—you can see each plate of the Peterson field guide only in its entirety, but if you accessed it via the species, all but one illustration are cloudy and unfocused, which hurts my eyes. 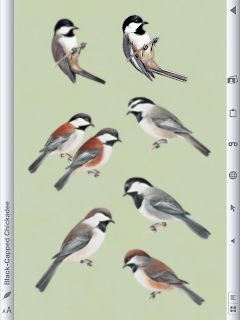 (If you click on the side buttons, you can also access the song, and get other information.) 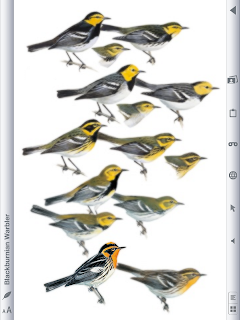 (If you click on the side buttons, you can also see the immature plumage, access the song, and get other information.)

It’s irritating to try to compare two species on the same page because you can’t see both in focus at the same time after you've touched one on the page. 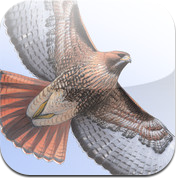 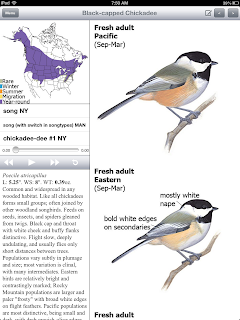 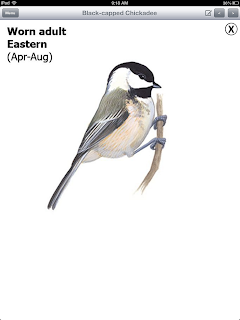 (Scrolling down gives a total of seven chickadee drawings, including flight, and you can see all the drawings enlarged by clicking on them.) 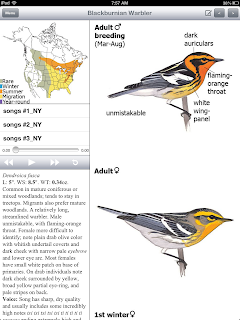 (If you scroll down, there are a total of eight blackburnian drawings, including winter and flight. And you can see each drawing larger, taking up a full screen.)

The Sibley birding app costs 19.99. It was well worth paying at least twice as much as most other birding apps until now, and I'm sure I'll still use it a lot. The National Geographic one is as good—in my opinion even better—and it’s only half the price—$9.99. I’m glad I have both, but if you’re looking for just one, the National Geographic is the one I’d recommend.

NOTE: Right now about half the time when I open the National Geographic app, it shifts the window so I can't see the entire page--the right side of each is cut off. I'm sure they'll fix this bug ASAP.
Laura Erickson at 9:26 AM
Share