(My birding adventures this year are being posted at my Conservation Big Year blog.) 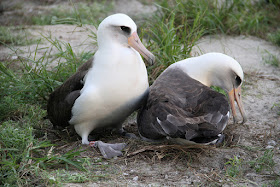 Now that I turned 60 over a year ago and have had a chance to test the waters a bit, I can affirm that not only is being in one’s sixties far, far better than the alternative, but also that the sixties can provide as many wonderful experiences as any other decade. Since turning 60, I’ve seen my lifer California Condor, taken my best photos ever of Northern Gannets, Boreal Owls, and even otters, become an author of a National Geographic bird book, and overall been having a jolly good time.

But one albatross—the only wild bird known for certain to be even older than I am—seems to be putting my activity level to shame. Back in early 1956, Chandler Robbins banded a breeding female Laysan Albatross on Midway Island in the Pacific. Today Robbins is one of the most respected and beloved ornithologists in the world—the lead author of the Golden Guide field guide and the man who started the Breeding Bird Survey—but then he was a hard-working young employee of the US Fish and Wildlife Service, working on the banding project in order to work out win-win strategies to save the Midway albatrosses from extermination while protecting military aircraft coming and going on the island.

We have no idea how old the albatross was at the time, but she had to be at least 5 years old to be nesting, so she had hatched out at the latest in January or February of 1951, and may well have hatched years earlier. Since Robbins originally banded her in 1956, her leg band has been replaced several times—leg bands can easily last a decade and sometimes more, but birds are overall sturdier than aluminum or plastic. In 2001, Chandler Robbins started tracing records of each band replacement of the older birds on the island, and realized that this particular albatross was one of his 1956 cohort of banded birds. That’s when she was given the name “Wisdom.” Now she’s at least 62 years old, yet in late 2012 she and her mate produced yet another fertile egg, which hatched on February 3, 2013. Chandler Robbins told reporters, “While I have grown old and gray and get around only with the use of a cane, Wisdom still looks and acts just the same as on the day I banded her.” 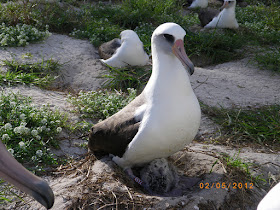 Some people have commented to me that her feathers look awfully good for being 62 years old, but they’re not—albatrosses replace every one of their body feathers once a year along with many of their flight feathers, and none of the flight feathers are older than three or four years old. So she doesn’t have to worry about going gray. Being a bird, she also doesn’t need to concern herself with stray hairs growing in on her chin or giving her an unwanted mustache. Unlike humans, birds of both sexes are usually attracted to the oldest mate they can find—experience counts for a lot, and unlike us mere mammals, avian fertility and the ability to ability to raise young seldom diminish with time. And birds of neither sex bother with mirrors anyway, going about their lives without stressing about superficial matters.
I take supplements that include Omega-3 fatty acids to prevent my creaking joints from getting sore. I presume Wisdom’s fishy diet protects her from that sort of thing, but nevertheless, all the obstacles a bird faces make surviving for 62 years darned remarkable.

The researchers tracking her estimate that she has flown up to 3 million miles since she was first banded. That’s “4 to 6 trips from the Earth to the Moon and back again with plenty of miles to spare,” said one spokesman. Like I said, she puts me to shame, and she’s still laying eggs and raising chicks. It’s ever so  lovely to realize that I’ve spent every single day of my life on the same planet as this remarkable bird. I hope she returns to Midway Island to raise chicks for many years to come.