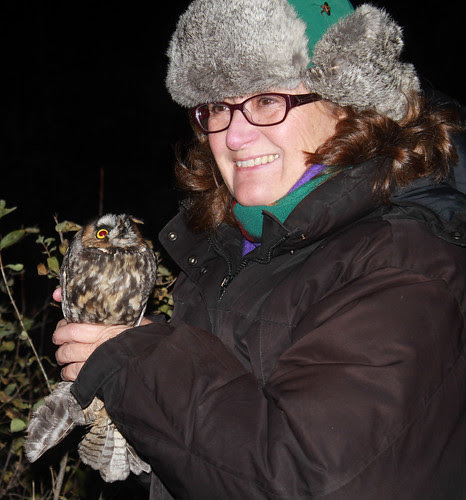 When I was a fairly new birder, right after Russ and I moved to Duluth, I went on a winter field trip to look at Snowy Owls and watched a couple get trapped and banded. The bander, David Evans, used a fake mouse tied to the end of a fishing line, which he cast out on the snow. In both cases, the movement as he reeled it in instantly caught the owl's attention—within seconds, it took off straight for the bait, only to get trapped in a net. David quickly and gently put the band on the bird’s leg, applied a colored dye to its forehead so he’d recognize the owl and not have to put it through this procedure again all winter, recorded the necessary data, and released it. I don’t think either bird was held longer than 3 minutes total.

I've also watched owl banding at research stations in Duluth, Whitefish Point in Michigan, Braddock Bay in New York, and other places, where the main species being trapped from day to day were Northern Saw-whet and Long-eared Owls. When Frank Nicoletti has public programs about owl banding at Hawk Ridge Bird Observatory, he is extremely cautious about allowing flash photography, prohibiting observers from using flash on most of the birds he displays momentarily before release, and is very careful to give the owls plenty of time to adjust before releasing them in the cases where he does allow people to take photos using flash. I've watched my education Eastern Screech-Owl when people photograph him using flash. He never twitches or shows any discomfort even in low light conditions, and his pupils return to the proper size for the ambient light within less than a second after a flash. As a reasonable precaution, Frank and other banders give the owls time to adjust, and based on my observations of wild and captive birds, that is sufficient. The owl in the photo below was held with a spotlight at Whitefish Point back in 1976. (When I also saw my lifer!) No one was allowed to use flash, but it wasn't necessary with the light, which he extinguished a full minute before releasing the bird. 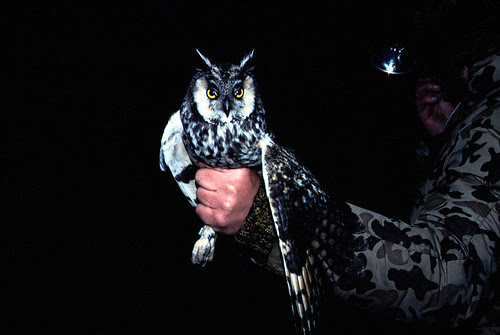 The body of research Duluth's first owl bander, David Evans, produced in the four decades he’s been banding up here has been seminal to our overall understanding of Snowy Owls. His was some of the very first research to establish that some individual Snowy Owls not only migrate south every year, but return to the same winter territory year after year as well. He found that many of the Snowy Owls that migrate south aren’t emaciated but rather in excellent condition—something that obviously makes sense because how could they fly a thousand miles or more from the tundra if they were emaciated from the start? Even though that is common sense, it ran against the ornithological consensus of the time. Snowy Owls that were picked up dead or dying were often emaciated,but necropsies usually showed that these birds had been poisoned or suffered some kind of physical trauma, often from collisions with structures, wires, or automobiles, rendering them incapable of hunting, but these problems didn't arise until they'd started moving south. Banding data reveals that the majority of Snowy Owls reaching the Lower 48 states embarked on their migration as healthy, robust birds.

This year, an exciting new program called Project SNOW Storm, is taking banding to the next level. Participants in the program are capturing Snowy Owls in the Northeastern and Great Lakes states and not only banding them but affixing a GPS-GSM transmitter to each bird, which allows them to track each bird. Duluth's own Frank Nicoletti is one of the researchers participating in the program. We're already getting valuable data that helps scientists understand Snowy Owl movements—information that will contribute to conservation of the species as well. The researchers are committed to attaching these transmitters only to individuals in robust health.

Anyone who has watched banders handling birds can see that the process is stressful to virtually all the individual birds. But if you’ve observed more than a few bandings, you also can’t help but notice that many of these individual birds benefit from the banding process. One of my owl-banding friends who occasionally trapped deer mice in his house froze them while they were fresh, and stashed a few, thawed, in his pocket when he was banding cavity-roosting owls. He didn’t lure these birds into nets—just reached into their roost holes in the daytime to capture them—but when he noticed that one was underweight, he’d give it one of those mice.

Some owls are caught with pre-existing injuries. I’ve known banders to remove excessive parasites, treat injuries, take emaciated or injured birds to rehabbers, and in other ways help individual birds they’re dealing with. And the lives of hundreds of Snowy Owls have been saved thanks to banders, who can capture birds at airports and relocate them so both people and those owls won’t be killed in airplane collisions.

Rarely, the banding process itself causes injuries or can even kill individual birds, but in all the years I’ve been watching banders, I’ve never seen a single case of this, so know how very exceptional it is. No one can get a master license to band birds until they've apprenticed under a master bander long enough to have thoroughly learned the best practices, and banding is strictly regulated by both the US Fish and Wildlife Service and state departments of natural resources. Although the banding process helps few individual birds overall, from what I’ve personally seen, the harm it causes individual birds is far, far rarer, and banders that I've observed go to exceptional lengths to minimize the stress to each bird. And the incredible body of knowledge about most species—knowledge that has directly improved their conservation—is due more to banding than to any other research method.

So I give a lot of latitude to bird banders for how they trap and handle birds. I hold birders, bird guides, and photographers to far stricter rules because their pursuit of birds is entirely for personal pleasure and financial gain, with no benefits for those individual birds.
Laura Erickson at 8:21 AM
Share