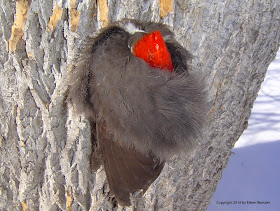 Last week, I opened my email to discover one of the most fascinating photos I’ve ever seen, from a friend in Port Wing, Wisconsin. Eileen Bentzen writes,

On the morning of March 2, 2014, in this longest and harshest of cold winters on record, I glanced out my window and saw a black “lump” on the side of one of the trees in my yard, which piqued my curiosity. Even with binoculars it was too far away to see anything but the fact it was black, shaped like a bird with a flare of red at the top. There was a vicious wind, and I could see what looked like feathers fluttering.

I had to see what it was – maybe a bird in distress, freezing, injured – so I slipped on my boots and coat, grabbed my camera and went for it. The snow was up to my waist, and immediately my boots were full of snow and my legs aching, but I got to the tree and took one photo, afraid it would scare the bird, but he didn’t move. He was gripping the tree with his feet, and soft downy, feathers, gray with tips of white, moved in the wind, his gloriously red crowned head tucked. He was directly in the sun, about a foot above the snow line, and as out of the wind as he could be. I put the camera in my pocket and reached out my mittened hands to touch the bird on both sides. As my hands touched him, his wings FLEW apart, his head jerked up and he instantly flew away. It was a huge male pileated woodpecker. When I startled him, which I am very sorry for, his wing span was awesome – and his movements so quick it was difficult to register. At least he wasn’t hurt, and he was able to get himself back into the woods safely.

I’ve never seen anything like Eileen’s photo. The bird was perched on the trunk, wings down in the normal position, obscuring all but the tips of the tail, and the soft down feathers of the back and sides were entirely erect, protruding through what we call the contour feathers of the back, providing maximum insulation. The sun was shining directly on the bird, and out of the wind where he was, he may have been warmer in the sun than he would have been within a cavity of a frozen tree. It’s very easy for woodpeckers to rest in a vertical posture—their claws cling effortlessly to the trunk, their body also braced by their tail feathers. When I was a licensed wildlife rehabber, I once took care of a fledgling Pileated Woodpecker for a few weeks, and he slept on a nice thick chunk of wood in this same posture, except it was summer, so my young bird didn’t erect his down in the same fluffy way.

Seeing a sleeping Pileated Woodpecker in captivity is no big deal, if you happen to have one handy. But discovering one in the wild is something else! I was thrilled that Eileen sent me the story and her amazing photo.
Laura Erickson at 7:19 AM
Share
‹
›
Home
View web version