Update on My Little Chickadee

This April I noticed that a chickadee coming to my feeder has a deformed bill. The upper mandible was elongated and curved strongly to the bird’s left. I ran out and bought some mealworms, and when I cranked open the window it instantly alighted on my hand, so I knew this had to be an older chickadee used to my feeding it mealworms. I was doing a big year in 2013, and didn’t want my chickadees to be disappointed whenever I didn’t turn up at the window, so the last time I’d been hand-feeding them was in mid-2012.

I took lots of photos and tried to get a local bird bander to come and band the bird so I could with solid proof track it as an individual, but spring is a hugely busy season for everyone working with birds. Meanwhile, I had several trips out of town this spring. That weirdly shaped beak would make it difficult for the little chickadee to pull out food from many kinds of crevices, so to make sure it was getting at least some good food, when I was gone, Russ started putting mealworms in a little container by the window. My pair of nesting chickadees was also taking mealworms from there, but the one with the deformed beak was able to get its share, too. The chickadees never once showed up when Russ was sitting at the window waiting—I’ve noticed that virtually every one that comes to the window recognizes me personally. That ability to discriminate among people is a good thing, even if it meant that Russ didn’t get the pleasure of feeding them by hand.

In May, when I returned from one of my trips and called in the injured chickadee, I noticed two developments. First, the elongated bill was shorter—the slender but overlong tip had apparently broken off at some point, and the beak wasn’t looking as weird anymore. But second, the bird’s right foot was deformed—missing all three front toes. Since I hadn’t actually seen the bird break its beak, this of course could have been a different individual, so I carefully examined all the photos I’d taken of it in April. In every one showing the right foot, I could clearly see the stump where the missing toes should have been. 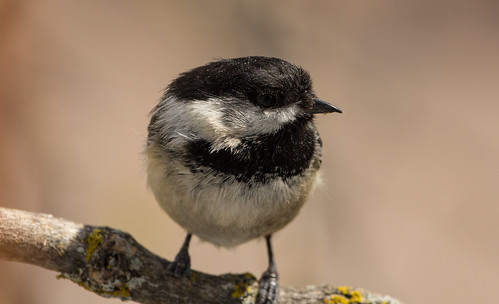 It’s tricky for a chickadee to groom with this kind of deformity: chickadees use their front claws for scratching and preening that side of their body, and use their toes to balance on one side when scratching and preening the other side. Now that I realized what was going on, I started paying closer attention to the chickadee’s behavior, and found it occasionally wedging the damaged foot in one rotten spot on my box elder so it could balance while preening with the other foot. So far I haven’t seen it using the bad foot to preen, but it’s not looking disheveled, so it must have figured out some way to take care of its plumage on that side.

This chickadee always comes to my feeder alone, so its deformities apparently disqualified it in the competition for mates. My mated pair is still hanging out together when coming for mealworms—they must not have a full clutch of eggs to incubate yet—but the injured one doesn’t seem to be trying to worm its way into a threesome. It must be sad and frustrating for it to not be able to do what birds and bees and educated fleas do in spring, but it doesn’t seem to feel sorry for itself. It only comes two or three times a day, and so is clearly getting plenty of natural food, but as long as it keeps returning, I’ll keep looking out for it.

Every chickadee is as much an individual as every human is, but to most chickadees, we people are a faceless blur they live with but don’t deal with individually. And most chickadees are pretty much all the same to us. But right now, I can pick out one little chickadee from all the others as a unique individual, and that one little chickadee picks out me as different, too. When that little guy appears and our eyes meet, I think of riding the New York City subway, among a faceless mass of humanity, and my daughter suddenly appears. That moment of recognition and joy is exactly the point where a true friendship can begin.