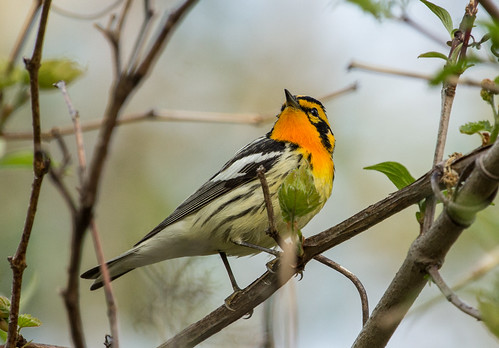 I realized long before that that my binoculars were far from the best. When I’d taken ornithology at Michigan State during the spring of 1976, after birding for a year, I was asked to co-lead a couple of class field trips, and one perk was being allowed to use the Leitz binoculars all the teaching assistants got to use. I’ll never forget my first glimpse of a Blackburnian Warbler through them—the clarity! The brilliance! The color! The view took my breath away. Thanks to their superior optics, every bird looked more splendid through them. But since there was no way we could possibly afford premium binoculars when Russ and I were both students, and then when I was teaching in Catholic schools and he was working on his Ph.D., I squirreled away the beautiful memories for a time in the murky future when we could afford them.

Meanwhile, I’d come to realize that a spotting scope would be very useful. When Russ was searching for one of those for me, he found a good optics retailer in Chicago—Charles W. Mayher and Son. When my poor binoculars finally needed to be replaced, during my summer vacation in 1979, that’s where we went. We talked to the "Son" of the company name, Carl, who told us that as nice as Leitz binoculars were, in his opinion Zeisses were even better, and he let me compare them in the store. I agreed. They were totally out of reach as far as our bank account went, but now I had something specific to aspire to.

For the time being, I got a pair of Minolta 8x25 pocket binoculars. Russ dug up our cancelled check from July 1979 for $141.75—that was a lot of money for us back then but after using my out-of-alignment bins for so long, the new view was great. I never regretted getting them, but now I seriously counsel against getting pocket binoculars for birding—they really don’t let in enough light for birding in the woods, at dawn, or in the evening. Back at the time, my eyes were young, my motivation high, and my pocketbook weak.

Switching from 7x to 8x was something of an adjustment. Just a few days after I got my new binoculars, my sister-in-law Jean and I took a road trip out West. Our first stop was Helmer Myre State Park in southern Minnesota. The birds all looked huge through them compared to what I was used to, and I remember being mystified by female Bobolinks—overcompensating for the size difference, I thought briefly that they were weird looking Le Conte’s Sparrows! But I quickly adjusted to the increased magnification, and during the next two weeks, saw a lot of birds, including 37 new lifers, through those Minolta pockets.

During the years I was pregnant and with babies and toddlers, my birding travels were curtailed dramatically, though I was as active a local birder as ever. I got my Minnesota list up to 300 doing most of my birding near home. Thanks to all the birding I did close to home back in the 80s, I may be the only person ever to reach 300 on my Minnesota list before I saw a single cardinal in the state. And I did it all using those pocket binoculars. After 1981, I wasn’t teaching anymore, so I was the only one who used them, and they lasted twice as long as the Bushnells did, for the next 9 years, as I brought my lifelist to 480 or so.

But I was doing more and more songbird and raptor counting, at Hawk Ridge and from up the shore at the Lakewood Pumping Station. Excellent optics are critical when you’re staring into the blue sky for 8 hours straight, as I realized after coming home with headaches after counting all day. I squirreled away some money from a cover story I did for Wisconsin Trails magazine, and we finally took the leap. On Hawk Ridge Weekend in 1988, I shelled out $800—our family's entire discretionary income for the year--on a pair of Zeiss 10x40 binoculars. And as much as I'd loved my second pair of binoculars, these instantly became The Best Binoculars Ever—a distinction they held until the summer of 2014.
Laura Erickson at 9:33 AM
Share