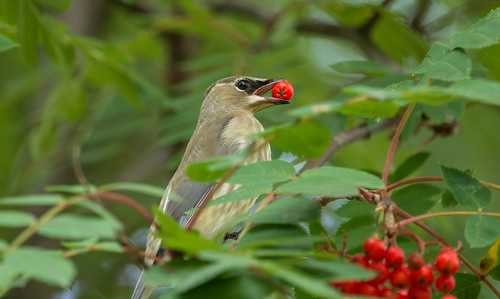 The Duluth-Superior area is so well known for our hawk migration and the amazing appearance of jaegers along Wisconsin Point every fall that we don’t pay enough attention to other cool birds passing through. Right now the most exciting birds in my own neighborhood have been the hordes of waxwings and thrushes descending on mountain ash trees and other fruit-bearing trees and shrubs. Up at Hawk Ridge, we can watch waxwing flocks numbering two or three to up to 40 or 50 passing through. Waxwings are shaped a bit like starlings, with triangular pointed wings, but are smaller and weigh less than half of what starlings weigh. That extra mass makes starlings powerhouses in flight, as you can see if you’ve ever seen a huge flock of them wheeling about in the sky—those YouTube videos showing enormous bird flocks forming bizarre shapes are starlings. Cedar Waxwings fly in a far more delicate, buoyant way. Their flocks seem to move in a much more leisurely fashion, and the way each bird shifts position relative to the others makes the flock appear to be gently swirling through the sky.

Lovely as flying waxwings are, I love being where they set down for a spell in convivial feeding groups. Of course, there are degrees of conviviality. There can be 20 or 30 Cedar Waxwings in a single mountain ash, but seldom will there be more than 2, and usually just one, per cluster of berries. I don’t think I’ve ever seen waxwings pass berries to one another in fall—their mission seems entirely about devouring as many as they can, laying on fat deposits that will help them over days of scarcity come winter. 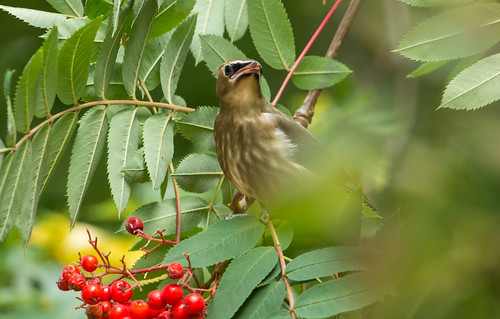 This week I’ve been hearing waxwings wherever I go in my neighborhood or up at Hawk Ridge, and Thursday I spent a little time in my yard and my neighbor’s taking photos. The flock I spent time with included a lot of young birds, which have streaked breasts and a somewhat shaggier crest than adults. 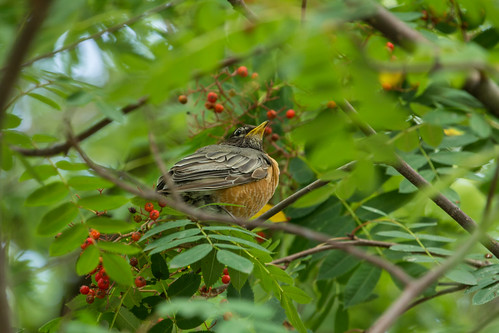 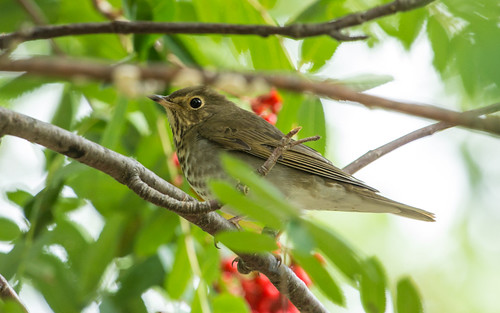 The waxwings are in the company of thrushes as well. Most are American Robins, but a good number of Swainson’s Thrushes have also been hanging out this week. The thrushes seem rather meek and mild—when I’ve watched a waxwing fly to a branch near a Swainson’s Thrush, the thrush always flew off to another branch. The American Robins are the bullies of the crowd—several times I’ve watched one fly straight toward a waxwing or Swainson’s Thrush at high speed. Instantly the smaller bird flies off, leaving a good bunch of berries to the robin.

Even though virtually all the birds in these trees right now have been Cedar Waxwings, Swainson’s Thrushes, and robins, I keep looking through all the branches in hopes of an outlier—a Red-eyed Vireo is often flitting about in the same trees, presumably eating a berry or two to sweeten its usual buggy fare. Nashville Warblers and American Redstarts were among them there earlier in the week, but they seem to have left with the drop in temperatures. The one time I had a Townsend’s Solitaire in my yard was during fall migration, mixed in with a flock of robins and waxwings. Hope springs eternal.

With or without outliers, watching and photographing just the common species has been delightful. September is one of the months that could use an extra week or two, just to pack in all the wonderful bird activity. But it always ends after 30 days, just as the berry supplies inevitably dwindle—in just a couple of days, the birds almost completely stripped my favorite mountain ash of its berries. Just as the birds are grabbing for all the berries they can, while September is here, we’ve got to grab for all the gusto we can. 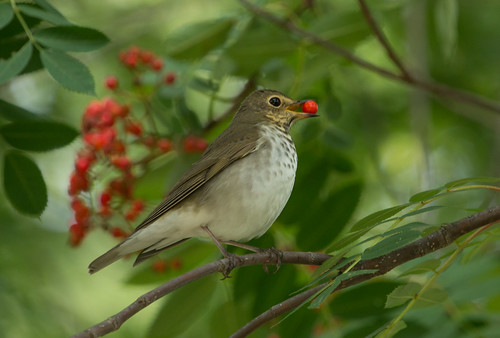