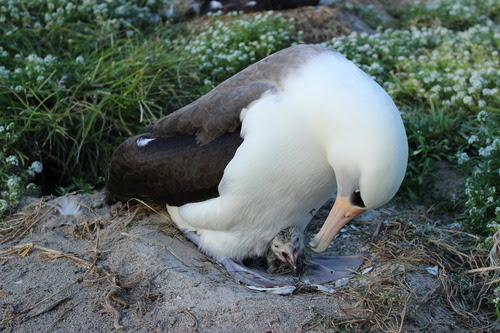 On November 11, I turn 63 years old. Many people my age and even some who are substantially younger find it embarrassing to admit how many years they’ve lived on the planet, but to me, every year is a triumph. My lifespan is already several times the maximum known lifespan of many of my favorite birds—for example, I’ve lived more than 5 times longer than the oldest wild Black-capped Chickadee known to science. That one, known to be at least two years old in May, 2002 when it was banded in Minnesota, was caught again, alive, in December, 2011, when it was at least 11 and a half years old.
The US Geological Survey’s Bird Banding Laboratory keeps track of banded birds, and posts the longevity records of these banded birds on their website.

According to those numbers, there is only one bird who has ever survived to reach my age: a female Laysan Albatross who made international news in 2011 not only as the oldest known bird, but one who was still successfully raising young when she was at least 60. This past winter she raised another chick.

My hero Chandler Robbins is the scientist who banded her as a breeding adult on Midway Island on December 10, 1956. It takes a minimum of 5 years for females to start breeding, and they aren’t successful until at least 10 years old, so the estimate of her having been hatched in the first months of 1951 is a very conservative one. She may be a few, several, or many years older, but she’s at least 63, and soon to turn 64.

This albatross, nicknamed Wisdom, was banded as part of a project worked out between the US Fish and Wildlife Department and the military following World War II. The Naval Air Station Midway was decommissioned in 1950, but in the face of the Korean War, was re-commissioned, and at that point, with planned jet aircraft take-offs and landings for the first time on the island, the military thought it best to exterminate the nesting albatrosses to avoid collisions. Robbins and others thought if scientists could figure out what vegetation the albatrosses preferred, what substrates they avoided, and their patterns for takeoffs and landings, they could perhaps set the runways where the birds wouldn’t affect safety. That was back in the olden days when many decisions were worked out among different government agencies actually working together to find the wisest long-term solutions for everyone concerned. Imagine that!

So on December 10, 1956, Robbins caught and banded 99 adult albatrosses as they were incubating eggs—they’re quite clumsy on land, so they weren’t all that hard to catch. He put band number 587-51945 on one bird. Those leg bands are sturdy, but affixed to the leg of a bird flying about 50,000 miles low over salt water every single year, they get corroded and wear out. Some birds probably lost their bands altogether, but Wisdom was re-trapped five times while her leg band was still legible—each time the worn out band was removed and a new one put on. Each time, the old number was recorded along with information about the bird’s condition and the new band number.

But bird-banding recaptures happen infrequently, bands are replaced even more infrequently, and replaced bands are virtually never replaced again, so the computer system that tracks banded birds wasn’t programmed to track such a long line of replacement bands. It was Chandler Robbins himself, now in his 90s, who started wondering about how far back any birds with replacement bands could be tracked. He’s the one who looked at an albatross with a bright red plastic band, number Z333, and dug into the data to find out what her previous band was numbered, and what the one before that was, and the one before that one, to realize this particular albatross was one of the ones he had banded on his first trip to Midway Island back in 1956. I don’t know if anyone has dug into the data to see if others from that cohort are still alive. As I said, any of them that lost their worn out band over the years would be impossible to recognize now.

As far as what we know for certain, other birds haven’t survived nearly as long as Wisdom, but thanks to banding, we do know that many birds lead surprisingly long lives. In my next post I’ll post some longevity records for other species.