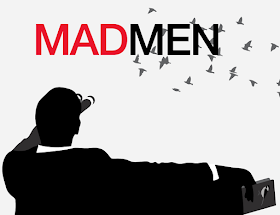 (This is a transcript of today's radio program which you can hear here.)

On April 5, the final season of Mad Men will begin. Almost from the beginning, people have been speculating about how the popular series will end, though like Dorothy’s ruby slippers, the answer was right before us from the very start. Don Draper’s existential crisis was encapsulated right into the series credits, showing the adman in free fall, drifting down down down until right when it looks like he’s going to crash, we realize our perspective is all wrong, and he’s landed safely, on the outside of that terrifyingly empty, materialistic world.

What hardly anyone knows is that Matthew Weiner’s iconic character is based on the life of a real person. By the mid-70s, Dick Whitman, aka Don Draper, had entirely given up the essential falseness and materialism of the advertising world for the natural world. Yes, it’s true. Don Draper left advertising to become a birdwatcher, first doing pro bono work for the Audubon Society and then spending his final years in the mountains of California protecting California Gnatcatchers and the last wild condors.

I have here in the studio some of the only people on the planet who know the true story. We’ll start with me, because in fact, I not only knew the real Don Draper, but I’m his daughter. You heard that right—Laura Erickson is the real Sally Draper. During my freshman year of college, I got active in the 1973 Earth Day celebration.   My best friend, Glen Bishop, got active in environmental issues in high school and college, so naturally I did, too. But the thing we cared most about was wildlife, and by April 1973 we were very frustrated that we’d not made much progress at all on getting an Endangered Species Act passed. So I talked to my dad, who was reaching a crisis in his marriage to Megan and hated advertising and everything else about his life. He was desperate to find something true to believe in. When I asked him if he could help us find some effective ways of persuading someone to introduce the bill in the Senate, he grabbed at the opportunity like a lifeline.

HENRY FRANCIS: I’m Henry Francis. I married Sally’s mother in 1964. Don and I hated each other for a long time, but despite his character flaws, we grudgingly grew to respect each other. When Sally asked him for help with getting the Endangered Species Act through Congress, he turned to me. I’d been quite influential in New York state politics, and he thought my connections could help. I didn’t know anyone in New York who would be willing to get embroiled in the controversial act, but was good friends with Pete Williams, the New Jersey senator who had already made a reputation with his controversial Coal Mine Safety and Health Act and Urban Mass Transportation Act.  Pete was the one who introduced the Endangered Species Act. Don got so involved in that, and was so happy to earn Sally’s respect, that he started working pro bono for the Audubon Society to educate the public about endangered species.

SALLY DRAPER: His helping with the Endangered Species Act marked a sea change in my relationship with both my parents. My mom and Henry started treating me with more respect, and my dad and I grew very close, and stayed that way from then on.

SALVATORE ROMANO: I’m Salvatore Romano, former art director at Sterling Cooper. The 60s were a horrible time for a gay man in New York, or really just about anywhere. Lee Garner Jr. from Lucky Strike made a pass at me—Garner was a repulsive man in every way, but he held so much power over Sterling Cooper that I tried to be as polite as possible when I turned him down. But he demanded that the agency fire me, and Don went along, even making a cutting remark about “you people” to me. I was devastated. I disappeared into the seamiest elements of New York City’s gay community, and I even fell into the drug scene for a while. Matthew Weiner didn’t go into it in the TV series, but it was Don Draper who pulled me out. He’d been having horrible nightmares about his dead brother—he told me he was tired of being the cause of so much devastation, and he begged me to let him help me since he’d played a part in my problems, too. He bought me a first class ticket to San Francisco and used his connections to set me up with some great job interviews, and even paid for a couple of suits and a visit to his barber so I’d make a good impression. I’d long since lost my portfolio, but he dug up a lot of my work and put it all together to make me look pretty impressive.

If you didn’t want to hide in the closet, San Francisco was way better than New York for a gay man back then. Thanks to Don, I got a great job as an art director in the theater community, doing the kinds of real art that an adman only dreams of. That got me involved in the local theater scene, too—after a lifetime of misery, I was in heaven. Plus I crossed paths with the man who has now been my partner for decades. Edward is one of the least artistic gay men in the world—of all things, he was a birder, happiest out hiking in some godforsaken landscape watching condors or tiny little gnatcatchers—but somehow we both expanded each other’s worlds and settled into a very happy life together. When Don started promoting endangered species, he looked up Edward and that’s how he and I reconnected. Don Draper was certainly messed up for a while, but he was one of the most fundamentally decent human beings I’ve ever known. I was proud to be his friend up to the very end.

JIM BAKER: This is me, Jim Baker. I was a copywriter at McCann Erickson in the early 70s. I thought I was the only birder in the New York advertising world until one day during spring migration, out of the blue, who do I run across in Central Park but Don Draper, looking up at a Cerulean Warbler. Yep, he got me my lifer! This was 1975, and by then he was out of advertising and doing work for the Audubon Society. Don was still pretty much bicoastal at that point, but whenever he was in town, we’d meet in Central Park before work. When I couldn’t take that life anymore in the 80s, it was Don who helped me move my stuff up to Lake Superior to start Baker’s Blue Jay Barn. And whenever he couldn’t hack how his life was going, he’d hole up with me in the North Woods for a little R&R with Nature’s Perfect Birds. By then neither of us had a telephone, but we wrote each other about our bird sightings every Sunday. One week, his letter didn’t come. He was working on his California Gnatcatcher project, and I knew some rich landowners had threatened him, so I flew out. It was me who found his body—well, what was left of it.

EARTH ANGEL:  I’m Earth Angel. My real name, of course, is Suzanne Farrell: I was Sally Draper’s teacher. That was when Don’s marriage to Betty was falling apart, and it was a very bad time for both of us. I stuck with teaching in Ossining for a few more years, but after reading Silent Spring, I started working on environmental issues and moved out to Oregon to do Spotted Owl work with my brother. Don and I reconnected when he was helping Sally on the Endangered Species Act.

SALLY DRAPER: At first I hated that—it gave me the creeps that my dad had had a relationship with my teacher and now was hooking up with her all over again! But by then I was starting to see that even though he was so messed up about women, my dad was a good guy, and Miss Farrell—I mean Suzanne—was good for him and made him happy.

EARTH ANGEL: After Jim Baker found Don’s body, hundreds of people came out of the woodwork to tell us how Don had changed their lives. We received millions of dollars in contributions.

JIM BAKER: He never wanted any recognition for himself, so we earmarked all the money to Don’s three pet projects: the Adam Whitman Environmental Education Center in Illinois on the old farm site where Don spent his early childhood; the Lane Pryce National Wildlife Refuge and Jaguar Protection Project in southeastern Arizona; and of course, the Bert Cooper Theater in San Francisco.

EARTH ANGEL: Don explained all about Bert Cooper. After Cooper died, his spirit started appearing to Don, always singing and dancing. At first Don thought he was hallucinating, but little by little, he came to realize that this really was the spirit of Bert Cooper. Bert Cooper was sharing with his protégé his after-death realization that Ayn Rand was wrong. How we deal with our fellow travelers, animal and human, on this beautiful planet is how we are measured as human beings. That’s it. Don Draper spent the rest of his life trying to live up to that simple message.

SALLY DRAPER: And that’s the true story of my dad, Don Draper, aka Dick Whitman. You’ll find out all about it when Mad Men starts up again, at least if Matthew Weiner sticks to the truth.

With the voice talents and support of Brad Adams, John Keenan, Karen Keenan, and Kat Steffens, and artwork by Michael Geraci.
Laura Erickson at 12:34 AM
Share
‹
›
Home
View web version